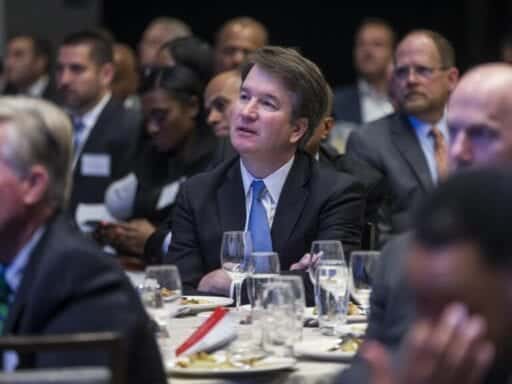 A new sexual misconduct allegation has surfaced against Supreme Court Justice Brett Kavanaugh — and some 2020 Democratic presidential candidates are now once again launching calls for his impeachment.

Sen. Kamala Harris, a member of the Judiciary Committee that oversaw Kavanaugh’s contentious confirmation last year, made her position clear via a tweet on Sunday. Harris argued that Kavanaugh lied to lawmakers and the American people, and should be removed from the bench as a result.

I sat through those hearings. Brett Kavanaugh lied to the U.S. Senate and most importantly to the American people. He was put on the Court through a sham process and his place on the Court is an insult to the pursuit of truth and justice.

He must be impeached.

It’s more clear than ever that Brett Kavanaugh lied under oath. He should be impeached.

And Congress should review the failure of the Department of Justice to properly investigate the matter. https://t.co/Yg1eh0CkNl

Sen. Elizabeth Warren said Kavanaugh should be impeached just “like the man who appointed him.”

Last year the Kavanaugh nomination was rammed through the Senate without a thorough examination of the allegations against him. Confirmation is not exoneration, and these newest revelations are disturbing. Like the man who appointed him, Kavanaugh should be impeached.

As did former Texas Rep. Beto O’Rourke, who wrote, “We know he lied under oath. He should be impeached.”

Yesterday, we learned of another accusation against Brett Kavanaugh—one we didn’t find out about before he was confirmed because the Senate forced the F.B.I. to rush its investigation to save his nomination. We know he lied under oath. He should be impeached.

And on an appearance on This Week with George Stephanopoulos, Sunday, Sen. Amy Klobuchar, who questioned Kavanaugh as part of the Judiciary Committee as well, stopped short of suggesting impeachment, but deemed his confirmation process a “sham.”

Sen. Amy Klobuchar on Justice Brett Kavanaugh: “I strongly opposed him, based on his views on executive power, which will continue to haunt our country, as well as how he behaved, including the allegations that we are hearing more about today” https://t.co/gxl9RihwwF pic.twitter.com/pvjUbSfTS9

These reactions were prompted by a New York Times piece published this weekend, which featured an excerpt from an upcoming book by Robin Pogrebin and Kate Kelly.

That excerpt details an incident similar to the one described by Kavanaugh’s former Yale classmate, Deborah Ramirez. Ramirez had alleged that Kavanaugh drunkenly exposed himself and forcibly thrust his genitals in her face without her consent, something Kavanaugh denied. A second Yale classmate has now levied a similar allegation from another party attended by Kavanaugh:

We also uncovered a previously unreported story about Mr. Kavanaugh in his freshman year that echoes Ms. Ramirez’s allegation. A classmate, Max Stier, saw Mr. Kavanaugh with his pants down at a different drunken dorm party, where friends pushed his penis into the hand of a female student. Mr. Stier, who runs a nonprofit organization in Washington, notified senators and the F.B.I. about this account, but the F.B.I. did not investigate and Mr. Stier has declined to discuss it publicly. (We corroborated the story with two officials who have communicated with Mr. Stier.)

Last fall, allegations of sexual misconduct threw Kavanaugh’s confirmation into doubt. At the time, Palo Alto University professor Christine Blasey Ford accused Kavanaugh of sexually assaulting her in high school and testified in front of the Senate about the incident. Kavanaugh denied this allegation, and the allegation brought by Ramirez. When asked about the new allegation by Pogrebin and Kelly, Kavanaugh declined to comment.

In the wake of Kavanaugh’s confirmation, talk of impeachment had already been floated both because of his testimony on sexual misconduct as well as comments he made about his work in the Bush administration, which some lawmakers saw as potential perjury. Due to the latest revelation in the New York Times, 2020 Democratic candidates are, again, calling both Kavanaugh’s prior testimony — and his rushed confirmation — into question. Republicans, meanwhile, are firmly sticking by his side.

How an impeachment process would work

According to the Supreme Court’s website, the only way to remove a Justice who is not leaving of their own volition is via impeachment. Thus far, there’s only been one instance when one chamber of Congress approved the impeachment of a Justice. The Justice in question was Samuel Chase, a judge the House voted to impeach in 1805 due to his treatment of “biased jurors” and defense witnesses. The Senate went on to acquit him.

As Vox’s Dylan Matthews writes, impeachment of a Supreme Court Justice works pretty much the same way it would for a president:

Impeachment and removal of a federal judge, including a Supreme Court justice, requires meeting a high political bar. Just as with presidents, a majority of the House must approve an indictment to impeach, and a two-thirds supermajority of the US Senate must convict for the judge or justice to lose their office.

Given the Republican Senate, it’s unlikely that a push for Kavanaugh’s impeachment would garner enough Congressional support. This current reality, however, doesn’t mean that Democrats are necessarily ready to give up the fight.

Since the Senate poses an obstacle, Democrats may instead turn to the House of Representatives, where they hold a majority and control which investigations are launched. But only if Democrats manage to keep their majority in the House, win the Senate, and put one of the candidates calling for impeachment in the White House will Kavanaugh’s seat be in any real danger.

State of the Union 2020: President Trump gives annual address to Congress
Why fracking got so much airtime in the home stretch of Trump’s campaign
A smart baby bed has stirred controversy for its $1,300 price tag. Now parents can rent it.
The Fed’s surprise role in stimulus talks, explained
The real story behind this Harry Styles album cover
Meet Jaime Harrison, the leading Democrat trying to unseat Lindsey Graham in South Carolina