Democrats are campaigning in poetry again 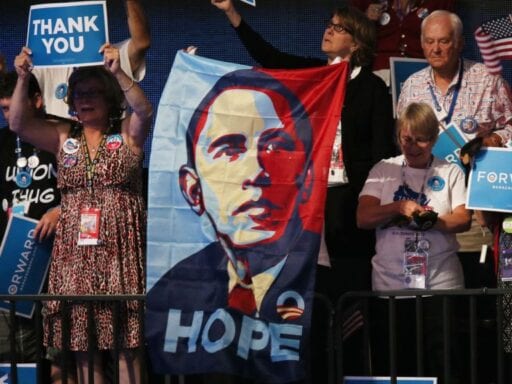 The real message of Medicare-for-all and Abolish ICE.

Jeh Johnson, Barack Obama’s second-term secretary of Homeland Security, quips in a recent Washington Post op-ed that “abolishing ICE is not a serious policy proposal; it’s about as serious as the claim that Mexico’s ‘gonna pay for the wall.’”

It’s a bit unfair. Both the idea of a Gulf-to-Pacific border wall and the idea of coercing Mexico into paying for it suffer from essentially insurmountable technical problems, whereas ICE in its current form only dates back to 2003 and clearly the bureaucratic org charts could be redrawn again to get rid of the agency.

But on another level, it’s a decent analogy. Building the wall and making Mexico pay was a potent campaign signal that marked Donald Trump as an advocate of unusually harsh border security measures and a confrontational attitude toward Latin American governments. It was a slogan that people understood and connected with — both supporters and opponents — on an emotional level, even as they almost certainly understood that the specific elements of the program were a little fanciful.

“Abolish ICE” is the progressive response. Democrats are adopting the line as a signal to voters that they reject Trump’s vision of a closed America, one that separates children from parents as they seek asylum. They aren’t offering a 17-point plan to restructure immigration enforcement.

ICE is operating exactly as designed when it rips screaming children from parents. That’s exactly why we must abolish it.

We MUST have the moral and political courage to #abolishICE.

Weak half-measures do nothing. This is a defining moment of our time – the time to act is now. pic.twitter.com/0viiQ4qdz8

Democrats are following in Trump’s footsteps by prioritizing emotionally resonant constructs over detailed, practical agendas for action. Other popular progressive rallying cries of the moment, from “Medicare-for-all” to “free college” to “guaranteed jobs,” are incredibly ambiguous as policies. The activists and elected officials promoting them often seem more focused on building support for the slogans than for a particular vision of what they mean. It’s striking, for example, that most “Medicare-for-all” proposals would enroll people in programs that are very different from existing Medicare.

This is an aspect in which Trump very much is normal. What’s abnormal was the fad for most of the Obama years for very literal campaigning. An old saying about American politics holds that you campaign in poetry and govern in prose. In the Trump era, it’s back to poetry. And all of us — perhaps especially the literal-minded among us — had better get used to it.

How’s that hopey-changey thing working out for you?

Once upon a time, of course, Barack Obama was the airy, sloganeering fantasist of American politics.

His 2008 health care plan was basically unworkable, which Clinton pointed out at the time. Obama implicitly acknowledged this in office by adopting her individual mandate proposal that he rejected as a candidate. As a first-term senator, he seemed underqualified for office. He vowed to violate traditional diplomatic protocols and norms of office by holding direct talks with the leaders of rogue states, and his most memorable campaign pledges were “hope” and “change you can believe in,” rather than actual policy promises.

It turned out, however, that the president can’t unilaterally change American political culture — especially when the opposition party in Congress has a vested interest in stymying him by turning everything under the sun unto a partisan food fight.

What he can try to do is make people’s lives better in concrete ways, which is what Obama did. He pivoted his political strategy to emphasize that fact.

Detail-oriented, policy-focused journalists like Michael Grunwald, Jonathan Chait, and a number of other writers who now work at Vox created a supportive online media environment for his approach.

Then Republicans drew the comically-inauthentic but plausibly-competent Mitt Romney as their nominee, and Obama’s reelection bid turned into a historically unusual wonk-off.

Obama attempted to pass the baton to Clinton, who had long been openly derisive of his more idealistic streak and whose approach across two primaries and one general election campaign might be characterized as featuring the audacity of hopelessness.

I’ll confess that I, personally, always liked this about Clinton. Clinton was an open practitioner of Max Weber’s politics as a vocation in a world full of phonies preaching unworkable charismatic leadership models. At the end of the day, though, part of embracing an ethic of responsibility is recognizing that you need to win to do anything. And plodding literalism is not a great way to do that.

The important thing is to be ready to govern, not to spell it out in detail on the trail.

Bernie Sanders’s 2016 primary campaign annoyed a lot of establishment Democrats by being so obstinately, flagrantly unrealistic.

People who lived through bruising congressional debates that ended up killing even a weak public option and exempting auto dealers from Consumer Financial Protection Bureau oversight knew that there was simply no way Democrats were going to spend 2017 enacting a single-payer health care system and breaking up big banks.

But by detaching itself entirely from the practical realities of the legislative landscape, Sanders managed to get in touch with a much clearer set of values that animate people in progressive politics. The reason that Democrats fought for the Affordable Care Act is they didn’t think people should find themselves blocked from the ability to get medical care by lack of money. And while the ACA took large strides in that direction, various proposals to further tweak it did not speak to those values in the same way that a call to extend Medicare coverage to everyone did.

Since the election, most Democrats seeking national leadership have been trying to capture some of that magic. And that drive to articulate values more clearly has — even more than movement to the left on policy — been the main shift inside the party.

While endorsing the call to “abolish ICE,” for example, Kirsten Gillibrand (D-NY) didn’t really say anything different on policy than what Obama said in his second term. What she found was a more emotionally resonant way to say it.

I believe we need to protect families who need help, and ICE isn’t doing that. It has become a deportation force. We need to separate immigration issues from criminal justice. We need to abolish ICE, start over and build something that actually works. https://t.co/JtSN68k4Fd

What exactly starting over to build something that actually works entails is unclear, just as nobody has yet written a “Medicare-for-all bill that explains exactly where the revenue will come from. The point, however, is that most Americans believe that people should be able to get medical treatment they need regardless of ability to pay. For Democrats who want to own that brand, signaling that the party shares the public’s beliefs on health care, “Medicare for All” is a profound, important, and useful statement of values.

You really do have to govern in prose, though

There’s no sense hectoring normal people for preferring comprehensible slogans and high-minded aspirations to tedious disquisitions on the art of the possible, and there’s certainly no sense in hectoring practical politicians for trying to give people what they want.

That said, it is always worth keeping in mind that governing is difficult. Republicans over the years have veered so far into the realm of sloganeering that they barely retain any capacity at all to develop policies that bear any resemblance to their campaign rhetoric. Years of promises to repeal and replace the Affordable Care Act with something that would address some of people’s frustrations with the program turned out to be completely vacuous — which seemingly surprised even many GOP members of Congress.

Democrats should remember that even their more wonk-oriented party suffered from some serious failures of policy substance — most notably an underpowered stimulus bill, a health care law that wasn’t structured to support short-term economic recovery, a group of excessively timid and unimaginative Federal Reserve appointees, and an inability to grapple with the foreclosure crisis in a timely manner — that played a larger role in generating electoral defeats than any shortcomings of sloganeering.

It’s incumbent upon politicians embracing the new poetry of the activist left to spare some time for thinking about what, exactly, it is that they want to do if they take office.

“The only thing we have to fear is fear itself” is a classic of American oratory notwithstanding the fact that it was not, strictly speaking, accurate. But the New Deal itself became an iconic success story because Roosevelt married his rhetoric to policy initiatives that (mostly) worked on a technical level.

The tough question for Democrats on immigration isn’t really about whether or not to abolish ICE or even what exactly that means, it’s what should the entire progressive program on immigration look like in an era when the quest for a grand bargain is dead. But the trend toward putting the poetry back into politics ought to be seen as a welcome turn to normalcy, not some kind of objectionable left-wing flight of fancy.

America’s third Covid-19 surge, explained
The missing puzzle piece for getting to 100% clean power
The Senate still doesn’t know when it will vote on the coronavirus bill
Why Trump’s release of the Ukraine call transcript could hurt US foreign policy
Every New York state primary race you need to know about, briefly explained
Doctors’ new coronavirus threat: Patients who refuse to wear masks