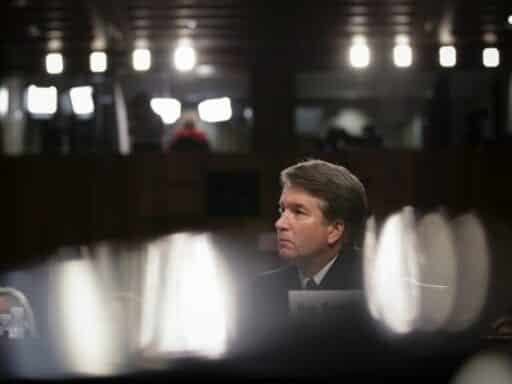 In 2006, Kavanaugh said he “was not involved” in legal justifications for torture. Democrats now say that’s in dispute.

Senators repeatedly suggested he misled the committee in 2006 on issues that ranged from the Bush administration’s detention of enemy combatants to his awareness of an email hack that affected Judiciary Committee Democrats.

By calling out alleged inconsistencies between his 2006 statements and documentation that has been unearthed since, Democrats sought to damage Kavanaugh’s credibility and paint him as a judge who’s ethically somewhat slippery.

Pinning down more of these possible inconsistencies is one of the main reasons Democrats have been pushing the fight for documents. Additional emails and memos from Kavanaugh’s time in the Bush White House could expose more details regarding his involvement on issues like torture policy, they argue.

Kavanaugh held firm that he’d told the truth before the committee in 2006. But the fight over his past testimony is ultimately another example of Democrats’ argument that Kavanaugh’s vetting process has been anything but open — an argument they’ve revisited frequently throughout the two days of confirmation hearings.

Kavanaugh’s appointment to the DC Circuit Court of Appeals followed a lengthy stint at the George W. Bush White House, where he served as White House counsel from 2001 to 2003 and staff secretary between 2003 and 2006. As a result, much of his 2006 confirmation focused on his work with the administration, with lawmakers putting forth questions about his knowledge of the White House’s controversial wiretapping program and detainee policies. He was ultimately recommended for confirmation in 2006 by a narrow 10-8 committee vote.

At the time, senators pushed Kavanaugh on what he knew about the Bush administration’s authorization of the use of torture on terrorism suspects. The Bush administration argued that the CIA’s use of waterboarding, sleep deprivation, electric shocks, and other “enhanced interrogation techniques” in questioning those detainees was legal.

Kavanaugh denied working on the legal issues involved: “I was not involved and am not involved in the questions about the rules governing detention of combatants or — and so I do not have the involvement with that,” he said at the time.

Not so, argues Sen. Dick Durbin (D-IL), who cites two news outlets that reported that Kavanaugh was, indeed, present at a “heated” meeting that centered on whether US enemy combatants should be given lawyers while they are being detained.

Durbin began disputing Kavanaugh’s account soon after the 2006 hearing: He ended up writing a letter to Kavanaugh — which he recently posted to social media — questioning how honest Kavanaugh had been regarding his answer on the subject.

In 2007 I sent Brett Kavanaugh this letter asking to explain his inaccurate and misleading testimony to the Senate Judiciary Committee. I’m still waiting for an answer. pic.twitter.com/c7XoGJKDSj

In an interview with the Washington Post, Durbin said “what he told us under oath is not accurate.” He also noted on Twitter that he’s still waiting for an answer from Kavanaugh.

Questions around whether Kavanaugh had obscured the truth even prompted Sen. Patrick Leahy (D-VT) to send a letter to then-Attorney General Albert Gonzales, with an inquiry centering on whether Kavanaugh “falsely testified,” according to CNN. But there wasn’t enough evidence to spur a criminal investigation, Brian Benczkowski, then principal deputy assistant attorney general, determined.

Leahy focused much of his Wednesday questioning on a Judiciary Committee hack in the early 2000s, in which Republican staffer Manny Miranda was linked to the exposure of thousands of internal documents chronicling Democrats’ thinking on several subjects, including their consideration of judicial nominees.

In 2006, lawmakers had asked Kavanaugh about his knowledge of the hack and his use of the documents. At the time, Kavanaugh said he was not aware of how such documents had been obtained.

Leahy sought to press the point again on Wednesday — suggesting that Kavanaugh did, indeed, have more knowledge about the contraband nature of these documents than he let on. Kavanaugh said that he did not.

Senators have also asked in the past about Kavanaugh’s role in the confirmations of controversial Bush administration judicial nominees, although that point didn’t come up in Wednesday’s hearings, as of publication time.

Kavanaugh’s record indicates that he helped support the confirmation of Charles Pickering, a federal judge who once backed segregation. Pickering’s nomination was the subject of a tense multi-year battle in the Senate, but President Bush ultimately used a recess appointment to seat him on the Fifth Circuit Court of Appeals. According to the New York Times, Kavanaugh was in charge of developing a binder of information in favor of the nominee and communicated with a White House spokesperson about advancing an op-ed about Pickering’s nomination.

In his 2006 hearing, however, Kavanaugh downplayed his work on Pickering: “This was not one of the judicial nominees that I was primarily handling,” he said.

Democratic leaders, including Senate Minority Leader Chuck Schumer and California Sen. Dianne Feinstein, have been skeptical of this framing.

“Testifying under oath before the Judiciary Committee in 2006, Brett Kavanaugh downplayed his role in shepherding the Pickering nomination through the Senate,” Schumer has said, “but the limited documents from Kavanaugh’s time in the White House Counsel’s Office that Chairman Grassley has made public show that he led critical aspects.”

For Democrats, it all comes back to the documents

Democrats have also tied questions about Kavanaugh’s 2006 hearing to their central demand for documents, noting that more documents would offer additional insight about the veracity of the claims he made.

Republicans have long refused to request Kavanaugh’s documents from his time as staff secretary. Their approach to the documents garnered even more blowback after the Trump administration directed Bill Burck, a private attorney leading a parallel review of the documents, to withhold 100,000 pages in documents from public release.

The back-and-forth over Kavanaugh’s hefty trove of documents was the primary focus of Day 1 of the hearing, with Democrats criticizing a 42,000-page document dump by a representative of Bush’s presidential records on Monday, shortly before the start of the hearing.

On Wednesday, Kavanaugh stood firm that his testimony in both 2006 and 2018 were accurate reflections of his work in the Bush White House. Democrats seem convinced that more documents could prove otherwise.

As the coronavirus pandemic deepens, Idaho’s governor signs 2 anti-trans bills into law
DOJ has officially abandoned Trump’s effort to repeal Obamacare by judicial decree
Mike Pence stayed at a Trump hotel 180 miles away from his Ireland meetings — for “safety”
The legal theories of Amy Coney Barrett, explained
Hollywood almost lost to this city
How cricket went from an old British pastime to primetime entertainment for billions