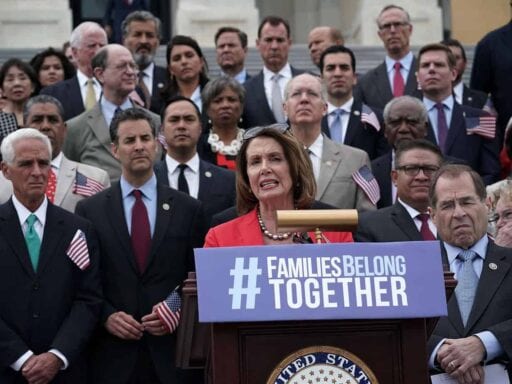 For the first time in years, House Democrats are getting the chance to vote on a Democrat-sponsored immigration bill — and they are planning to vote against it.

House Republican leaders said they would bring up a vote for a contentious “Abolish ICE” bill proposed by three progressive Democrats — Reps. Mark Pocan (D-WI), Pramila Jayapal (D-WA), and Adriano Espaillat (D-NY) — knowing it would put the minority party in a difficult position. Republicans know Abolish ICE is divisive for Democrats, so they’re taking the most left-wing proposal out there and putting it up for a vote.

Progressive Democrats never thought their messaging bill, which would have disbanded Immigration and Customs Enforcement agency within a year, would make it to the floor. They didn’t try to build a coalition around it or even reach out to parts of the Democratic conference, Jayapal said. Now, they are trying to find a way to match Republican gamesmanship.

“It’s very important that the Democrats be united on this and not let the Republicans score cheap politics points,” Rep. Ro Khanna (D-CA) told me. “My hope is we will all vote the same way and use this to make the points about what can be done to improve border security.”

The debate around whether to vote for this bill is an early test of the Democratic Party’s increasingly left-leaning policy platform — and so far, Democratic lawmakers are splintering on the issue. The majority of Americans oppose eliminating ICE and for now, Democrats seem like they will unify against the bill.

The Congressional Hispanic Caucus has already come out against the proposal, and the progressive lawmakers who wrote the bill have said they won’t vote in favor of it, instead using the floor time to make public statements on Trump’s immigration policy.

As Democrats look to take back control of the House, they will be tasked with developing a unified position on immigration. The scrambling around the Abolish ICE bill shows Democrats have a lot more work to do.

Democrats weren’t ready to be taken seriously on Abolish ICE

The Establishing a Humane Immigration Enforcement System Act, was supposed to be another messaging bill on immigration. With Democrats in the minority in both the House and Senate, Republicans have not entertained any Democratic proposals on the issue.

So it was a surprise to everyone when Republican leadership announced it was going to put the bill up for a vote — clearly a strategy to put Democrats on the spot and get them to show their cards.

Confronting Democrats with an imminent vote on their most left-wing immigration proposal did exactly what Republicans wanted. It created a deep divide among the Democratic caucus because few people had seen the bill text or had gotten outreach from the authors.

The divide was most noticeable among the Congressional Hispanic Caucus, whose members were fuming for not being approached or consulted before the bill text was released, according to Politico’s Heather Caygle.

Even though two CHC members — Espaillat and Rep. Nydia Velázquez, both of New York — were co-sponsors of the bill, the group came out forcefully against the legislation.

In an interview with Vox, Jayapal said that much of the bill included findings about ICE separating immigrant families and conducting raids to deport migrants back to their home countries — things that the entire Democratic caucus has vocally opposed.

“I think everybody in the caucus is united around the fact that the abuses of children in cages and families being separated,” Jayapal said. “It’s shone the light on how much of a rogue agency this is.”

Both Jayapal and Pocan made it clear they are going to take this opportunity of the floor vote to hammer the Trump administration on its hardline immigration policies.

“We’re thrilled that we get to force a conversation about immigration issues like kids in cages and the fact that families have been separated, the fact that we have 1.8 million DREAMers that are still out there because of their intransigence,” Jayapal said.

Democrats certainly agree that Trump administration policies are devastating immigrant families. But there is far less agreement about what exactly they want to propose as an alternative.

Republicans are making Democrats answer for a vocal minority

For months, immigration has been Republicans’ biggest vulnerability. A Republican-led Congress has failed to pass a single immigration bill, and Trump’s administration continues to push extremely unpopular policies on the border.

Most Americans think Democrats would do a better job dealing with immigration than Republicans, according to a recent Pew Research Center report, and more than half of Americans — 58 percent — disapprove of how Trump has handled immigration matters, according to an early July Quinnipiac poll.

Progressives’ rallying cry to “Abolish ICE,” was largely in response to the Trump administration’s failed “zero tolerance” policy at the border, which separated more than 2,000 immigration children from their parents. In a way, “Abolish ICE” has been a more symbolic opposition to Trump’s immigration agenda as a whole.

But support “Abolish ICE” as an actual policy idea isn’t as clear cut. House Minority Leader Nancy Pelosi (D-CA) has called for “an immediate and fundamental overhaul” of the agency, but stopped short of saying it should be disbanded altogether. Even Sen. Bernie Sanders came under fire for initially dodging the idea. He eventual came out in support of abolishing and restructuring the current ICE agency.

So now, Republicans are trying to spin the “Abolish ICE” message as a radical liberal overreach. They know it’s unpopular slogan nationally; according to a recent survey by Morning Consult/Politico, 54 percent of the Americans are against abolishing ICE.

Trump is already using it to make Democrats seem weak on the border, and anti “law and order” — a winning message for the Republican base.

When we have an “infestation” of MS-13 GANGS in certain parts of our country, who do we send to get them out? ICE! They are tougher and smarter than these rough criminal elelments that bad immigration laws allow into our country. Dems do not appreciate the great job they do! Nov.

It has forced Democrats to try and regain control of the issue.

“If we make it clear that we believe in enforcement and protecting our borders, but this bill is about following the recommendations of ICE agents than it can be a win,” Khanna told Vox. “We need to be unified and argue this on our terms.”

France, Germany, and UK say Iran is responsible for attacks on Saudi Arabia
The Trump administration is challenging a court ruling that prevents it from ending the census early
Oscars 2020: winners, nominations, and biggest moments
Boris Johnson, the UK’s prime minister, explained in under 650 words
These are the popular ideas progressives can win with (and some unpopular ones to avoid)
Cannes Film Festival 2019: reviews, news, and analysis