Democrats aren’t sure Bloomberg should run for president. A new poll suggests voters aren’t either. 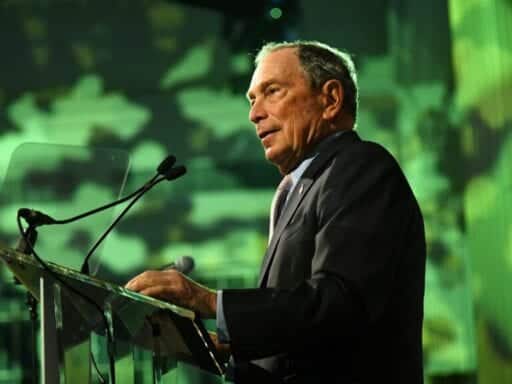 A new poll found Bloomberg would have 4 percent support and would be the most unpopular Democratic candidate if he were to enter the race now.

Billionaire and former New York City mayor Michael Bloomberg is considering entering the Democratic presidential primary, and though he has not yet declared his candidacy, he has not received a warm welcome to the race from current candidates, particularly those concerned another billionaire, Amazon founder Jeff Bezos, may have tried to recruit the former mayor as a presidential candidate.

Bloomberg hasn’t formally announced he’s running, but he filed paperwork to run in the Alabama primary on Friday. One of Bloomberg’s advisors tweeted Bloomberg is considering a run because he’s “increasingly concerned that the current field of candidates is not well positioned” to beat Trump in the general election.

Recode’s Jason Del Rey reported Saturday Bloomberg also faced some peer pressure — Bezos reportedly called Bloomberg months ago and asked if he would run. The former mayor told his fellow billionaire at that time he would not.

But news of the call galvanized progressives in the race, particularly those who have made concerns about wealth inequality central to their campaigns.

Sen. Bernie Sanders, who was campaigning with one of his key surrogates — Rep. Alexandria Ocasio-Cortez — in Iowa, told supporters, “You’re not going to buy this election by spending hundreds of millions of dollars on media in California.”

Ocasio-Cortez later told reporters, “They’ve got class solidarity. The billionaires are looking out for each other. They’re willing to transcend difference and background and even politics.”

Sen. Elizabeth Warren, who has called for taxing assets over $1 billion at 6 percent, also skewered Bloomberg following reports of the call, writing on Twitter, “One billionaire calls another billionaire and asks him to run for president—I’m shocked!” She also linked to a wealth calculator showing how much billionaires would pay under her proposed wealth tax (there’s a button where visitors can choose to be Bloomberg, among others).

One billionaire calls another billionaire and asks him to run for president—I’m shocked! Here’s the deal: Companies like Amazon have too much power, and billionaires like @JeffBezos and @MikeBloomberg should pitch in so that everyone can succeed. https://t.co/TTF5jYIVxh

Former Vice President Joe Biden, the candidate whose campaign is perhaps most similar to what Bloomberg’s would be like, did not respond to the story, but did tell reporters in New Hampshire Friday, that he was unperturbed by a Bloomberg run, adding: “In terms of he’s running because of me, the last polls I looked at, I’m pretty far ahead.”

Early polling around Bloomberg’s potential run bears that out. Should he enter the race now, the billionaire would be the sixth-favorite Democratic candidate — polling at 4 percent, below Kamala Harris and above Andrew Yang — according to a poll released Sunday by Morning Consult.

Potentially complicating his ability to expand on that showing is the fact pollsters found Bloomberg to be more disliked by Democratic primary voters than any other candidate. He was, however, found to be about as likely to beat President Donald Trump as Joe Biden, Elizabeth Warren, and Bernie Sanders.

These early results suggest his entrance to the race would likely have little effect beyond creating a new foil for candidates like Warren and Sanders, and perhaps an alternative for moderate voters not yet sold on Biden.

Bloomberg’s candidacy may hurt Biden, while helping Warren and Sanders

As Vox’s Emily Stewart reported, Bloomberg has long considered a bid for the White House. Which party might take him there, he’s been less certain about:

He contemplated running as an independent in 2016 but ultimately decided against it out of concern it might result in a Donald Trump victory. (Trump won anyway.) Though he has previously identified as a Democrat, Republican, and independent, Bloomberg switched his party affiliation back to the Democrats in 2018 and has become a backer of the party. He donated millions of dollars to Democratic candidates in the 2018 midterms.

He’s been vocal about his support for passing gun control legislation and said it’s high time for “acting boldly” against climate change, but he’s not a fan of proposals put forward by Warren and Sanders like a wealth tax or Medicare-for-all.

So Bloomberg would run as a centrist candidate, who would compete directly with candidates positioning themselves as moderates like Biden and South Bend Mayor Pete Buttigieg.

But when Biden said he’s still far ahead of his competitors, he was right — the Morning Consult poll indicated he had 31 percent support among Democratic primary voters, well above runner up Sanders at 20 percent. And although his rivals have bested him in some state polls, Biden nevertheless is at the top of most national polls, averaging around 28 percent support according to RealClearPolitics.

One issue Biden may face is that recent polling has shown support — particularly in Iowa — is soft, meaning a challenger could siphon off voters, and as Vox’s Matthew Yglesias has explained, this causes a Bloomberg run to be a problem for the former vice president:

The key is that in recent years moderates who’ve successfully fended off the left wing of the Democratic Party have done so with the support of black and Latino voters, who tend to be more moderate on the whole than white Democrats. But Bloomberg’s specific political career gives him little access to this constituency and thus little hope of securing the nomination.

Biden is very well-known, has support from older, working-class Democrats, and has more multiracial support than Bloomberg does. So the former mayor pulling voters away from Biden won’t make a Bloomberg victory more likely, Yglesias wrote, but it could lead to a win by Warren or Sanders.

If Bloomberg were to join the race, he would do so late: He has said he doesn’t plan to campaign in early caucus and primary states like Iowa and New Hampshire. Instead, he would focus on Super Tuesday to “start on an even footing” with other candidates, advisor Howard Wolfson said.

One 2020 candidate is rooting for Bloomberg, however. While his fellow Democrats welcomed him with a little side-eye, his former constituent, President Donald Trump told reporters Friday Bloomberg would be an ideal rival because he “doesn’t have the magic to do well.”

“Little Michael will fail,” Trump said. “There is nobody I’d rather run against than Little Michael, that I can tell you.”