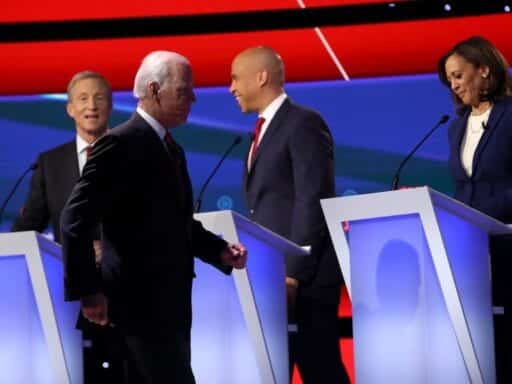 Both productivity and economic growth have slowed down, not sped up.

Productivity — economic output per hour of work — has grown at an unusually slow rate in recent years. That makes it hard to have robust economic growth. That slow overall growth isn’t the only reason average wage and income growth has been poor also doesn’t help.

But Democratic candidates given the opportunity to address this topic at Tuesday’s debate mostly claimed to believe the country is experiencing a surge of automation-driven productivity increases. And the main dissent from that view came from Sen. Elizabeth Warren, who instead pointed the finger at trade. This trade versus automation debate is interesting and at least somewhat important, but its significance pales in comparison to the significance of the larger slowdown in the pace of change.

It’s an incredibly important problem that deserves solutions even if it isn’t an activist hot button. But the Democrats running for president mostly don’t seem to realize that it’s happening.

Most Democrats are peddling misguided fears of automation

The dialogue on this topic began with a question for Sen. Bernie Sanders, which simply posited that the point of his federal jobs guarantee proposal is to combat “the threat from automation.”

Sanders himself didn’t actually engage with the automation question at all (or really explain anything about how a jobs guarantee would work or why it’s a good idea), and instead basically just laid out his view that there’s a lot of useful public sector work to be done.

Andrew Yang then touted his signature proposal of “a freedom dividend of $1,000 a month” as his “vision in response to the fourth industrial revolution” which is what futurists term the allegedly widespread trend of automation.

Warren, then, somewhat downplayed automation, saying “the reason is bad trade policy. The reason has been a bunch of giant multinational corporations who have been calling the shots on trade.”

Then Julián Castro shot back with a dose of populism.

“Senator Warren, I have been talking to Americans around the country about automation,” he said. “They are smart. They see what’s happening around them. The stores are closing. They see a self-serve kiosk in every grocery store, every CVS.”

It’s a big economy. And of course, at any given time there are, in fact, some people whose careers are being put at risk by new technology. My mother, for example, was an analog graphic designer who eventually lost work to the rising tide of desktop publishing software in the late 1980s. But the fact is that neither the late 1980s nor today were times of particularly rapid technological change and displacement.

Productivity growth has been slowing

The simple fact of the matter is that productivity growth has been slow in recent years, in both the United States and other advanced countries. If the pace of automation were speeding up, you’d expect to see the opposite — output per hour worked would soar in response to the deployment of all the new technology.

And not only has growth productivity been slow, it keeps turning out to be slower than previous forecasts had expected — forcing the Congressional Budget Office to continually reduce its forecasts.

Seen through this lens, the striking thing about automation in the contemporary United States is how little of it there is.

Stepping away from the charts and into the real world, think about the major cost centers in people’s lives — housing, transportation, health care, child care, education — and you’ll see that there’s been perilously little automation happening. Thanks to modern technology, it’s now moderately easier to order a taxi or schedule a doctor’s appointment than it used to be. Getting a home repair task taken care of remains an expensive labor-intensive undertaking. This is even more true of the “caring” sectors around health, education, child care, and long-term care for the elderly or disabled. Costs in these sectors have soared in part because there are no magic robots taking the jobs away and lowering prices.

The result is slow growth in the overall economy which contributes to slower growth in wages and incomes. But though candidates certainly touched on points that are related to these issues, nobody directly mentioned the growth slowdown, much less propose solutions to it.

The progressive agenda doesn’t make sense without a growth agenda

What candidates did talk about during the tax policy portion of the debate was inequality.

This is an important subject. But while some progressives seem to have convinced themselves that inequality is so important that you don’t need to talk about economic growth, the truth is the exact opposite — to tackle inequality in a serious way you need to confront questions about growth.

Fundamentally, the rise in inequality over the past 40 years has been driven by policy choices. But not choices that were made for no reason — choices that were made because voters and policymakers were looking for solutions to the economic problems of the 1970s. They became convinced that it would be smart to accept more inequality in hopes of sparking more growth. And in the short term, Ronald Reagan’s first term did successfully break the back of inflation at the cost of a severe recession, and then bounced back quickly from the recession with incredibly rapid growth in 1984.

But 35 years later, we know that the post-Reagan high-inequality era has not, in fact, generated sustainably faster growth than what we saw before. The economy has become more unequal, but growth has slowed. And it’s that slowdown in growth that makes the runup in inequality so unforgivable. If the rising tide was genuinely lifting all boats, people probably wouldn’t care so much about what the top one percent is up to. But the promised growth never arrived, and people are legitimately mad about it.

The lack of growth is a huge problem and it deserves serious solutions — including many of the kinds of specific things Democrats discussed relating to anti-trust law, labor unions, and investing in children — but to start you need to acknowledge the problem exists. And that means not dazzling people with fake stories of a robot revolution.

Heat waves can be deadly for workers and will drain the US economy
The vicious cycle of never-ending laundry
Scott Pruitt is leaving behind a toxic mess at the EPA
ABC’s Emergence blends Lost with This Is Us and adds a dash of E.T.
“I’m a bit of an overwriter”: How Carly Rae Jepsen whittled 200 songs down to 12 for her new album
The US’s new surge in coronavirus cases, explained