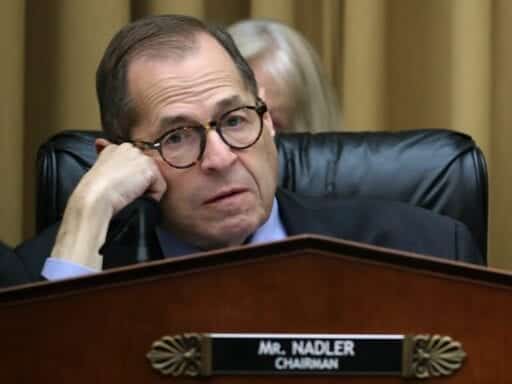 The House Judiciary Committee just approved something that could or could not be an impeachment inquiry, depending on who you ask.

The House Judiciary Committee voted to approve a resolution in favor of formally launching an impeachment investigation at a Thursday morning vote, along party lines.

To be clear, the committee didn’t just vote to approve impeachment itself. Instead, they voted to approve a “resolution for investigative procedures” that will guide them through an “investigation to determine whether to recommend articles of impeachment” against President Donald Trump. In other words, it’s the very starting point — and a dry and technical one at that.

This vote comes as House Democrats have struggled to articulate what exactly it is they’re doing. There’s been a lot of confusion among Democrats this week as to whether they’re pursuing an impeachment “inquiry” or “investigation,” or just continuing their investigations — and House Democratic leadership and Judiciary Committee members appear split on how they should talk about it.

“This committee is engaged in an investigation that will allow us to determine whether to recommend articles of impeachment with respect to President Trump,” Nadler said. “Some call this process an impeachment inquiry, some call it an impeachment investigation. There is no legal difference between these terms, and I no longer care to argue about the nomenclature.”

Basically, Nadler and House Judiciary members believe that launching an impeachment inquiry gives Democrats more ammunition to investigate President Donald Trump and his administration, which has largely stonewalled their congressional subpoenas and oversight investigations. The resolution lays out the “procedures for the questioning of witnesses by committee staff, it says Judiciary subcommittees can be involved in the process, and it says Trump’s lawyers are allowed to respond in writing,” as Vox’s Andrew Prokop explained.

But the big question is what comes next. As Prokop has written, the real test is whether House Judiciary follows this up by actually sending articles of impeachment to the full House for a vote, and whether they will do so before the 2020 election.

As of now, the fundamental dynamic among House Democrats surrounding impeachment remains the same. As a growing number of Democrats support an impeachment inquiry, arguing they need to respond forcefully to allegations that Trump obstructed justice, and to other allegations of corruption. While House Speaker Nancy Pelosi supports Democratic investigations, she’s being careful not to conflating it with impeachment.

“Have you not been paying attention? We’re legislating, we’re investigating — as six committees have been doing for months — and third, we’re litigating,” Pelosi told reporters Thursday. “I stand by what we have been doing all along. I support what is happening in the Judiciary Committee because that enables them to do their process of interrogation and investigation.”

Pelosi gets testy with a reporter who asks her about House Dems’ mixed messaging on impeachment, says the American people “understand that impeachment is a very divisive measure. But if we have to go there, we’ll have to go there. But we can’t go there unless we have the facts.” pic.twitter.com/9JtDvqdZ7X

Pelosi still won’t use the word impeachment, and she’s still urging caution. With the presidential election in full swing, many people believe the House Speaker doesn’t want to complicate Democrats’ chances of winning in 2020 with a messy impeachment battle on Capitol Hill.

“I believe the leadership is trying very hard to make sure we do not get in our own way, and that we did not basically undermine our own opportunity in the elections. I think the leadership really believes that,” House Financial Services Chair Maxine Waters (D-CA) — herself a vocal impeachment supporter — told reporters this week.

“Yes, we are in an impeachment investigation, have you not been reading the proceedings?” Judiciary Committee Vice Chair Mary Gay Scanlon (D-PA) asked incredulously during a hearing. “I don’t think there’s a question.”

Other members of the Judiciary Committee agree with Scanlon; that committee’s Democrats have been relatively unified on their messaging, unlike the larger Democratic caucus.

“It would be better for everybody to have the same message that we are currently in an investigation, which it seems to be some confusion from some of our members over August,” Rep. Pramila Jayapal (D-WA), a Judiciary Committee member and co-chair of the Congressional Progressive Caucus told reporters. “So I think the sooner we very clearly say this is an investigation into whether or not we’re going to recommend articles of impeachment, it’s the continuation of that.”

Other members, including Rep. Jim Himes (D-CT) told Politico the House wasn’t in an impeachment investigation. Himes is a member of the House Intelligence Committee, which has been conducting its own investigations of Trump.

On Wednesday, House Majority Leader Steny Hoyer, the no. 2 Democrat, flatly told reporters “no” when asked if he thought the Judiciary Committee was already in the middle of an impeachment inquiry.

Hoyer later sent out a statement clarifying his comments, saying he believed the question from reporters was about whether the full House was actively considering articles of impeachment, “which we are not at this time.”

“I strongly support Chairman Nadler and the Judiciary Committee Democrats as they proceed with their investigation ‘to determine whether to recommend articles of impeachment to the full House,’ as the resolution states,” Hoyer said in a statement. “It is critical that Congress have access to all of the relevant facts, and we will follow those facts wherever they lead, including impeachment.”

This speaks to the tricky dynamics here for House Democrats. Republicans, meanwhile, are very clear on their messaging.

“As we say in Texas, this is fixing to be an impeachment,” Rep. Louie Gohmert (R-TX), a Republican member of the Judiciary Committee. “It’s not now, but it’s fixing to be.”

Whether this investigation will actually lead to the Judiciary Committee recommending articles of impeachment is still very unclear, and the clock is ticking ahead of the 2020 election. Some Democrats know that’s a strategic choice on leadership’s part — even if they don’t agree with said strategy.

“I think the Speaker has determined she was going provide the kind of leadership that she feels is essential to being able to defeat the president,” Waters said. “She has said moving on impeachment is a timely thing to do, because she believes we don’t have the support of the Senate, and she believes we do not have the absolute support of the public. That’s her leadership thought. I disagree with all of that. I think we’re a day late and a dollar short and we should have done it a long time ago.”

Democrats’ new bet: boring can win
Juneteenth, explained
The US-China trade war, explained in under 500 words
Why some conservatives are rethinking libertarian economics
Romance novelists speak out on the harassment they face online
99 years ago today, one of America’s worst acts of racial violence took place in Tulsa