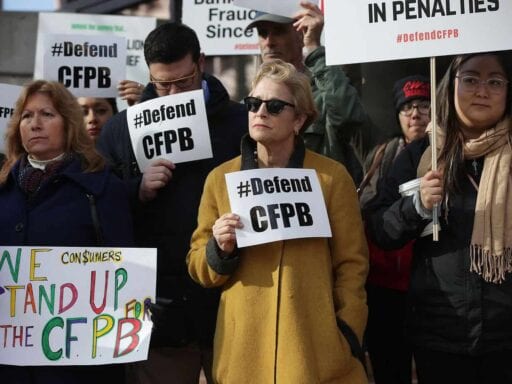 Kathy Kraninger’s confirmation hearing to become the next head of the CFPB is on Thursday.

The next fight in Congress over a Trump administration nominee will be over a little-known budget official with scant relevant experience tapped to lead the Consumer Financial Protection Bureau: Kathy Kraninger.

Kraninger, President Donald Trump’s pick to head the government’s top consumer watchdog, will face the Senate Banking Committee for her confirmation hearing on Thursday. Democrats and consumer advocacy groups are mounting resistance to her nomination, which they see as another step in the administration’s ongoing effort to undermine the federal government’s regulatory apparatus and diminish the CFPB.

Trump announced plans to nominate Kraninger, 43, to head the agency on June 18, replacing acting director Mick Mulvaney. Kraninger is currently the associate director for general government programs at the Office of Management and Budget, where she oversees a $250 billion budget across seven Cabinet departments, including the Department of Homeland Security and the Department of Justice. (In addition to his role at the consumer protection agency, Mulvaney is director of the OMB.)

Kraninger’s nomination was a bit of a head-scratcher: She doesn’t have much discernible experience or known interest in consumer protection or financial services. She wasn’t on anyone’s radar before her nomination, although multiple names with more applicable experience were floated as potential nominees, including Ohio lawyer Jonathan Denver and National Credit Union Administration chair J. Mark McWatters.

J.W. Verret, a George Mason University professor and former chief economist for Rep. Jeb Hensarling (R-TX), described Kraninger as a “mid-level budget staffer lacking expertise, chosen to leave one of the most powerful agencies in the government” in an interview with the Wall Street Journal when she was nominated.

Now Democrats are gearing up for a fight over Kraninger’s confirmation. Sen. Elizabeth Warren (D-MA) said she would try to block the nomination soon after it was announced in June. Banking Committee Democrats sent a letter to committee chair Sen. Mike Crapo (D-ID) asking him to postpone the hearing until the Trump administration sends over documentation on Kraninger they’ve requested in two separate letters to her.

Specifically, they’re asking questions about her role in the Trump administration’s “zero tolerance” immigration policies that resulted in the separation of migrant parents and children at the US-Mexico border, and her activities in relation to the government’s response to Hurricane Maria in Puerto Rico and ongoing affordable housing issues tied to the Housing and Urban Development Department. It’s all under her umbrella at OMB.

A spokesperson for Warren’s office said the Democrats intend to use “every procedural tool we have to get answers to our questions.”

The CFPB was created under the Dodd-Frank financial reform and formed in 2011. Its mission is to protect consumers who are dealing with banks and taking on debt, including mortgages, student loans, and credit cards. Under its first director, Richard Cordray, who was confirmed in 2013, the bureau by its own tally handled more than 1.2 million consumer complaints and brought about nearly $12 billion in relief for harmed consumers.

Many Republicans have been fiercely critical of the CFPB since its inception. They argue it is a prime example of government overreach and that its single-director structure places an excessive amount of power in the hands of a federal agency.

Since Trump’s inauguration, the CFPB has become more of a flashpoint, especially after Cordray stepped down in November and Mulvaney took over as acting director. Mulvaney, a former South Carolina representative, while in Congress criticized the CFPB and in a 2014 interview slammed it as a “sick, sad” joke. As acting director, he’s taken a number of actions to reduce its scope and rein it in: He’s disbanded consumer advisory boards, scaled back sanctions on payday lenders, and even pushed to change the agency’s acronym to BCFP.

Consumer advocacy groups and Democrats are concerned that Kraninger’s appointment will only do more damage to the CFPB than what’s already been done under Mulvaney.

She doesn’t have any discernible experience in financial services; her background appears to be largely in homeland security. The White House’s announcement of her nomination points out that in her current job at the OMB, she oversees budgeting for seven Cabinet departments and 30 federal agencies — the CFPB is one of them, but given the scope of her job overall, it’s unclear how involved she’s actually been.

Kraninger has “neither experience as a regulator nor expertise in consumer financial issues,” Bartlett Naylor, a financial policy advocate at consumer advocacy group Public Citizen, told the LA Times at the time of her nomination. “The nation’s leading consumer financial regulator is not an entry-level job.”

There has also been some speculation that Kraninger’s nomination is simply a way to keep Mulvaney in charge of the CFPB on a temporary basis for longer. Her nomination resets the clock on his time as acting director of the agency, and if she isn’t confirmed by the Senate, he gets to stay in. Either way, the confirmation could take months.

“It’s heads we win, tails they lose,” Chuck Gabriel, president of the research firm Capital Alpha Partners, told me recently. He emphasized he doesn’t think Kraninger is a throwaway candidate and may very well be confirmed, including possibly with some Democratic votes. “I think she reflects the downscaling of the weight and range of movement that Republicans envisioned for that bureau.”

There’s a lot under Kraninger’s umbrella at OMB. That’s exactly what Democrats are asking about.

Beyond Kraninger’s lack of experience in financial services and regulatory matters, Democrats and progressive groups have homed in on exactly what she’s been up to at the OMB. In a normally functioning White House, associate directors in each issue area within the agency play an essential role in policymaking. In Kraninger’s case, that includes the departments of Justice, Homeland Security, and Housing and Urban Development, among others.

Democrats have been pushing to find out what Kraninger knew about the Trump administration’s family separation practices, which took place as a result of actions undertaken by the DOJ and DHS. In June, Warren and Sen. Sherrod Brown (D-OH), the ranking member of the Senate Banking Committee, sent a letter to Kraninger asking for information and documents on her role in the development and implementation of Trump’s “zero tolerance” policy, including a description of her role in crafting the DOJ’s recommendations and DHS’s implementation, her communications with officials, and any analyses or recommendations she may have provided.

There’s a chance she had no idea what was happening at all, that all the decisions were made behind closed doors. Or she knew and was involved, or didn’t do anything to intervene, or voiced concerns and was overruled. Whatever the case, Democrats want answers.

Democrats have also asked Kraninger for information on her role in the Trump administration’s response to Hurricane Maria in Puerto Rico. In a letter addressed to her in June, they requested documentation related to her oversight of DHS, Treasury, and HUD on that front.

Warren’s office on Wednesday, ahead of the Thursday confirmation hearing, released a 14-page report alleging that Kraninger has a “record of failure” and examining the goings-on at the agencies she supervises at the OMB. The report cites the Trump administration’s activities in immigration policy, Puerto Rico hurricane recovery, and affordable housing.

“The entire case for her nomination rests on her purported management abilities. Yet a close look at her record shows consistent mismanagement, often with devastating results for poor and vulnerable people,” the report reads. “Her record does not justify a massive promotion to lead the federal agency charged with protecting consumers.”

Progressive and advocacy groups, such as Americans for Financial Reform and Public Justice, are making similar arguments against Kraninger’s nomination.

Kraninger helped craft the budget increasing funding for immigrant detention facilities and was likely involved in policies leading to the separation of immigrant children from their families at the Southern border.

Kraninger oversaw agencies which led the disastrous response to the crisis in Puerto Rico following Hurricane Maria. Experts say many people died after the hurricane because of the weak response and the island still lacks reliable power.

The hearing is scheduled for tomorrow, July 19. Kraninger must clearly answer for any role she had in this policy, and pledge to reverse Mulvaney’s course at the CFPB and truly #ProtectConsumers #KeepFamiliesTogether https://t.co/ZXCH3zH6XQ

Despite calls for delaying Kraninger’s confirmation hearing, it appears as though it’s moving full speed ahead. Banking Committee Chair Sen. Crapo’s office said he’s not postponing it. After meeting with Kraninger in June, he tweeted out his initial approval.

Had a positive conversation with @CFPB Director nominee Kathy Kraninger about her vision for the Bureau, which includes protecting consumers’ sensitive, personal financial information, expanding access to credit, and making the Bureau transparent and accountable. pic.twitter.com/r7Tfx3fwYD

Red-state Senate Democrats are redoubling their efforts to protect Obamacare
Trump berates Democrats as he begs for their votes on immigration bill
Stephen Miller promoted white supremacist, anti-immigrant articles in private emails to Breitbart
The charitable deduction is mostly for the rich. A new study argues that’s by design.
The quiet end of the Medicaid private option
“David Koch walked the walk”: a libertarian on the Koch brother’s legacy