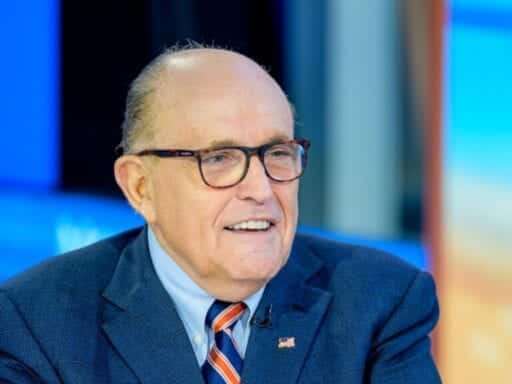 Here’s how they fit into the timeline.

In addition to summing up the findings from weeks of testimony in the House impeachment inquiry, Intelligence Committee Democrats’ new report has a surprising inclusion — the phone records of several major players involved in the scandal, including President Trump’s lawyer Rudy Giuliani.

Rep. Eric Swalwell (D-CA), a member of the committee, confirmed on CNN that investigators subpoenaed these phone records. And while the records can’t reveal what was actually said during these phone calls, they make clear that Giuliani was in close contact with the White House at key moments.

Giuliani also exchanged several calls with an unknown number identified in the report as “-1” — and though this isn’t confirmed, the report certainly seems to imply that this number is President Trump.

The records also raise further questions about the potential involvement of Rep. Devin Nunes (R-CA), the Intelligence Committee’s top Republican, in the Ukraine affair. He has been accused of participating in the push for Ukrainian investigations into Trump’s rivals, and the records show he exchanged calls with Giuliani and his “fixer” Lev Parnas (who was arrested in October for campaign finance violations).

Overall, though, the records serve to remind us that, despite all the text messages and witness testimony we’ve seen so far in the inquiry, there’s a circle of people at the center of this scandal whose actions, and communications, remain mysterious. And more broadly, it’s just rather remarkable that impeachment investigators managed to obtain the phone records of the president’s personal lawyer.

The records shed light on the campaign against Ambassador Yovanovitch

The Democrats’ report refers many times to a “scheme” carried out by President Trump and his allies to try and get Ukraine to investigate the Bidens. And in their telling, this scheme began with an effort to oust the US Ambassador to Ukraine, Marie Yovanovitch, who was standing in the way of these demands.

The outlines will be familiar to those who watched Yovanovitch’s testimony: Ukraine’s prosecutor general, Yuri Lutsenko, spoke with Giuliani and Giuliani’s fixer Lev Parnas, making false accusations against Yovanovitch and claiming there were scandals involving the Bidens. John Solomon, a conservative journalist, then wrote up Lutsenko’s claims for the Hill beginning in March. Then, in late April, Yovanovitch suddenly got word she was being recalled from her post, at the White House’s instruction.

The new phone records in the report add further detail to this story, and document contacts between the key players at important moments. For instance, Democrats say:

Then, on April 12, there are a series of calls, each involving either Giuliani or Parnas, and the following other people or numbers:

On April 21, however, outsider reformer Volodymyr Zelensky won the Ukrainian presidential election. In the days after that, Giuliani and his allies moved against Yovanovitch. The phone records for April 23 and 24 show the following:

Finally, on the night of April 24, a State Department official called Yovanovitch and told her she had to return to Washington, due to White House “concerns.” Those concerns, another State official later explained to her, were coming from President Trump.

None of this is surprising, exactly — but in filling out the story of what happened, it’s useful to show that Giuliani was calling the White House right before Yovanovitch was recalled.

Giuliani responded by tweeting, “The mere fact I had numerous calls with the White House does not establish any specific topic. Remember, I’m the President’s attorney.” That is true. But the Democrats’ report also cited Giuliani’s tweets and media appearances to establish what may have been on his mind around the time of these calls — and, usually, it was Ukraine.

Why “-1” often appears to be President Trump

While the Democrats’ report doesn’t outright say that the calls coming from the unknown “-1” number are from President Trump, they certainly imply it — and the context shows that’s with good reason.

The key is what happens before the “-1” calls. Take, for instance, these records from on August 8.

So this certainly seems like a series of efforts from Trump and Giuliani to get in touch with each other, eventually succeeding. (The “OMB number” could be for acting White House chief of staff Mick Mulvaney, who is still technically the director of OMB.)

Obviously, we’d expect Trump to be talking to his lawyer on the phone. That’s not scandalous in and of itself. But the placement and timing of these calls involving “-1” may be informative.

For instance, the series of calls on August 8 happened shortly after Giuliani met an aide to Zelensky in Madrid, and shortly before Giuliani, Gordon Sondland, and Kurt Volker started trying to dictate a statement for Zelensky in which he would commit to the investigations. So a phone call here could suggest that Trump was in the loop — and that Giuliani was speaking for him. (Though, theoretically, it could have been about another topic.)

Finally, one other reason why the “-1” number may be Trump is that we actually know he’s used a blocked number that shows up in other phone records this way. During the recent trial of Trump’s longtime adviser Roger Stone, prosecutors revealed that Trump’s phone had a blocked number in 2016, and showed up on Stone’s phone records as “-1.”

The role of Devin Nunes

Finally, the phone records have also focused renewed attention on the possible role of Nunes, the top Republican on the Intelligence Committee, in this whole saga.

As mentioned above, Nunes and Giuliani exchanged a series of brief calls on April 10. Theoretically, they could have been talking about any number of matters.

So it’s even more interesting that Nunes was also in contact with Giuliani’s fixer for Ukraine, Lev Parnas. On April 12 — amidst Parnas’s calls with Giuliani, Victoria Toensing, and John Solomon — Parnas also traded calls with Nunes, eventually speaking with him for about eight-and-half minutes.

Giuliani also had a series of contacts with Nunes or people close to Nunes around the time of his aborted trip to Ukraine this May.

Parnas’s attorney has previously claimed Nunes was in the loop for the Ukrainian dirt-digging effort, and these call records could well corroborate that statement. Nunes, of course, did not disclose any of this during the House Intelligence Committee’s hearings on the impeachment inquiry, during which he has argued the president has done nothing wrong with respect to Ukraine.

Trump’s weird reference to “CrowdStrike” during the Ukraine call, briefly explained
The vaping-related illness outbreak has peaked — but it’s not over
Gwyneth Paltrow split with Condé Nast because they wanted her to use a fact checker
The White House’s campaign against Anthony Fauci is a symptom of a bigger problem
The 2 veterans on the Democratic debate stage made a big promise about Afghanistan
The real story behind Rosie the Riveter