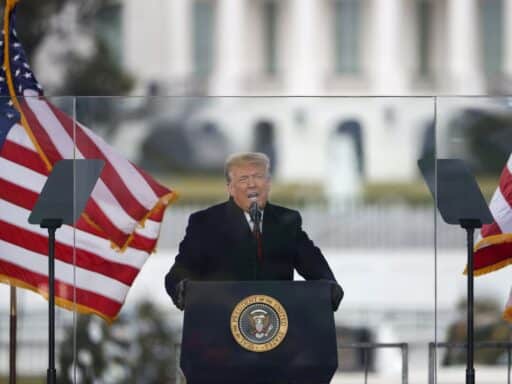 Democrats say Trump must be impeached for “inciting violence against the Government of the United States.”

Democrats introduced an article of impeachment against President Donald Trump on Monday, which accuses him of “incitement of insurrection” for his role in fomenting the deadly occupation of the capitol by violent pro-Trump actors on January 6.

The article was drafted by Democratic Reps. David Cicilline, Ted Lieu, and Jamie Raskin, amid pressure from the Democratic caucus and its constituents to immediately remove Trump from office.

As was made clear during the first impeachment proceedings against Trump, Congress can impeach a president for what the US Constitution vaguely defines as “high crimes and misdemeanors.”

This time, the impeachment article says Trump committed one high crime: “inciting violence against the Government of the United States.”

And it says this violence includes:

Because of these actions, the impeachment article states Trump “has demonstrated that he will remain a threat to national security, democracy, and the Constitution is allowed to remain in office.”

And it goes on to note, that due to the 14th Amendment’s language that bars any American who has “engaged in insurrection or rebellion” against the US from holding office, that Trump, if convicted in the Senate, should not just be removed, but should be completely disallowed from seeking public office ever again.

The Article of Impeachment: Incitement to Insurrection, drafted by Rep @davidcicilline, @RepRaskin, me & @HouseJudiciary staff, has now been formally introduced at the House pro forma session today. https://t.co/Y6ntbSXF9G pic.twitter.com/MfB4CpqC6C

The impeachment article is expected to draw the support of nearly — if not all — House Democrats; Sunday evening, Lieu said the article had 210 cosponsors.

Republicans are pushing back against impeachment

What Republican support it will gain, if any, remains to be seen. While GOP Sen. Pat Toomey has said, “I do think the president committed impeachable offenses,” he did not go so far as to say that meant Trump should be impeached. In the House, frequent Trump critic Rep. Adam Kinzinger (R-IL) told ABC News on Sunday he would “vote the right way” should impeachment be brought to the floor, but added, “I just think it’s probably not the smartest move right now,” because “I think it victimizes Donald Trump again.”

“A second impeachment, only days before President Trump will leave office, is as unnecessary as it is inflammatory,” the letter said.

Democrats, too, had hoped to avoid beginning impeachment proceedings. As Vox’s Andrew Prokop reported on Wednesday, House Speaker Nancy Pelosi and Senate Minority Leader Chuck Schumer have “both framed impeachment as a fallback plan. Their true hope, they said, was that Vice President [Mike] Pence and the Cabinet would invoke the 25th Amendment.”

The 25th Amendment gives the vice president and the Cabinet the ability to strip a president deemed unfit for office of their powers.

Removal through this amendment seems unlikely; as Prokop has explained, any 25th Amendment removal would have to be led by Pence, who reportedly opposes doing so. Also complicating matters is the fact that the majority of Trump’s Cabinet would have to sign onto the plan — instead, a number of secretaries have chosen to resign.

Nevertheless, House Democrats House Democrats brought a resolution calling on Pence to remove Trump via the 25th Amendment to the House on Monday — both to signal that this would be their preference, and to further pressure Pence into acting.

Pence, however, according to a CNN report, sees the amendment as a last resort, and wants to keep it on the table as an option should Trump become “more unstable.”

Democrats’ resolution on the 25th Amendment ultimately failed. They were attempting to pass it by unanimous consent (essentially, a process in which the resolution would pas as long as all present representatives agreed to it), given the full House has technically not yet reconvened — but West Virginia GOP Rep. Alex Mooney objected to it.

The resolution is likely to pass once the House resumes regular session; Democrats have a majority, and all are likely to vote in favor. But it is not expected to actually sway Pence’s thinking on the 25th Amendment, forcing Democrats to proceed with impeachment if they would like to try to remove Trump — and perhaps, bar his from seeking office again.

A vote on the article of impeachment itself is expected as soon as Wednesday, House Majority Leader Steny Hoyer said Monday morning.

You can read the full text of the article of impeachment below, or at this link.