Democrats keep talking tough on Silicon Valley. This week, they can’t stop taking money from it. 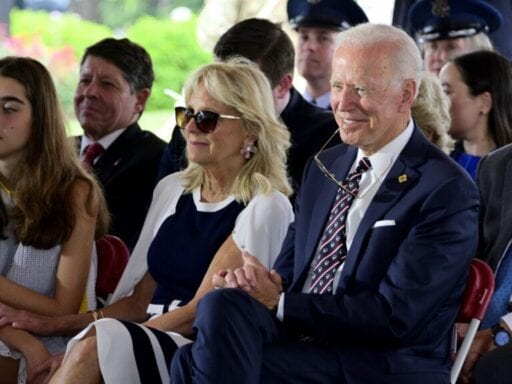 Share
Loading...
Both Joe and Jill Biden are fundraising in Silicon Valley this week. | Photo by Bastiaan Slabbers/NurPhoto via Getty Images

At least 16 different fund-raising events are scheduled across the Bay Area over a six-day period that ends Wednesday.

The run-up to the fundraising quarter that ends Monday evening has brought a bevy of Democratic presidential candidates to the golden gates of the Bay Area. At least 16 events featuring six candidates or spouses are scheduled to raise money over a six-day period that ends Wednesday, one of the largest bank rushes of the campaign so far.

All told, it’s a reminder that for all of the Democratic Party’s new rhetoric about the role that tech companies have played in corroding our democracy, presidential candidates are still dependent on the deep well of Silicon Valley money. Tech billionaires might be increasingly toxic, but not quite enough to repel Democrats in 2020.

Venture capitalists, Big Tech executives, and other rich Silicon Valley liberals litter the invitations seen and tallied by Recode, where tickets go for up to $2,800-a-head. While it is nothing new for presidential aspirants to court the tech wealthy, the volume of cash-chasing over the course of this week is as high as it has been at any point in the primary.

Kamala Harris had at least three fundraising events scheduled for Saturday and Sunday from Palo Alto to Oakland, while Pete Buttigieg — a new darling of Silicon Valley donors — is also cramming in three finance events on Sunday and Monday, according to invitations seen by Recode.

Amy Klobuchar, the Minnesota senator, has at least one event of her own on Tuesday evening in the tony Silicon Valley town of Atherton. Cory Booker, who has deep relationships of his own in Silicon Valley, is being feted by donors at two high-dollar events on Wednesday evening, according to invitations seen by Recode.

Joe Biden also touches down in Silicon Valley on Wednesday for three fundraisers. That’s just a few days after his wife, Jill Biden, came through town on her own four-event, two-day swing across the Bay Area.

It should be little surprise that this time of year is bringing such ravenous fundraising. The third fundraising quarter ends Monday at midnight, and the new reports will serve as a way to judge which Democratic presidential candidates have the financial wherewithal to compete beyond the first caucuses and primaries in February.

But what continues to complicate these trips is that Democrat candidates are seeking to lead a party that has grown skeptical of Silicon Valley’s power — so skeptical, in fact, that virtually all of these candidates are at least entertaining the idea of breaking up tech’s most iconic companies. Even Booker and Buttigieg, despite their strong ties to donors here, have criticized privacy violations by companies like Facebook. Klobuchar began her campaign by calling out the tech giants in her announcement speech. And Harris, California’s junior senator, has said she would “seriously” examine splitting up companies like Facebook.

For now, these Democrats have been able to skate by despite these contradictions. While some activists groan about Democratic candidates’ ties to Big Tech, their connections to donors have not yet been become a millstone. The two candidates who have been most critical of tech — Bernie Sanders and Elizabeth Warren — have notably not been raising Silicon Valley money. As the primary debate becomes more combative, maybe we’ll see Elizabeth Warren questioning aloud why Pete Buttigieg is palling around with Facebook or Google execs, for instance.

But in the meantime, they’ll take the money.

5 primary races to watch in Iowa
Michael Cohen’s letter of resignation from the RNC is weird for many reasons
The Trump administration will start sending migrants back to Guatemala under a new rule
The profound grief and terrible puns of Harrow the Ninth
7 things to know about the private equity industry
US mobile speeds are super slow. Here’s what we can do about it.