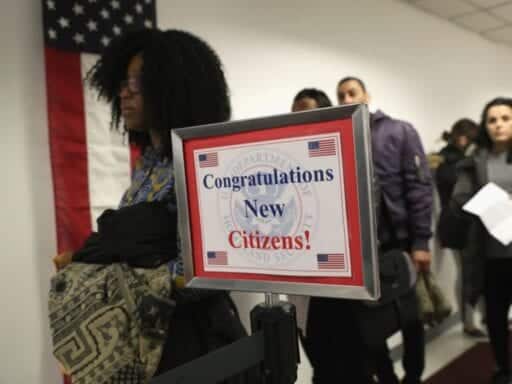 Democrats need to accept that President Donald Trump isn’t actually interested in the art of the deal.

For the last decade, policy-making in Washington was all about “grand bargains” and this was the approach Democrats took on immigration. They wanted to get the bulk of long-settled undocumented immigrants a path to citizenship in exchange for … basically anything from Republicans.

The premise, embodied in the failed comprehensive immigration reform bills of 2007 and 2013 was that a large bloc of Republican Party politicians was interested in a path to citizenship for the undocumented, and they’d fill in the blanks. That meant crafting a vision of the future of legal immigration that accorded with the desires of pro-immigration Republicans’ favorite lobbyists, and then throwing enough money at border security to win over marginal ones.

This was a perfectly reasonable idea, and it almost worked twice. And had the timing of then-FBI Director James Comey’s letter to Congress and the release of the Access Hollywood tape been reversed, it would have been very much worth trying again in 2017, as a repentant GOP tried to wash its hands of Trump.

But instead, Trump won and a clear result of his win is to accelerate and entrench preexisting trends toward immigration being an issue that is sharply polarized along partisan lines. Democratic Party politicians have grown more skeptical of interior enforcement and family detention while Republican leaders are referring to Latin American migrants as an infestation and clearly have no interest in pursuing a grand bargain.

The result is that progressives are now trying to fly an airplane with one wing, continuing to preach the gospel of the path to citizenship but stuck playing defense on the whole other range of issues. The obvious contemporary reality, however, is that for the foreseeable future major immigration bills are going to be partisan affairs like major health bills or major tax bills, so Democrats need to come up with an affirmative program of their own — one that champions broadly shared prosperity, the rule of law, and American greatness.

A natural starting point for an affirmative Democratic agenda on immigration is the path to citizenship for long-settled unauthorized residents of the country.

The path envisioned in the 2013 bill was a fairly torturous one that would in the majority of cases take 13 years to traverse, although it offered DREAMers and certain classes of agricultural workers what amounts to an express lane. That was a reasonable enough bargain to strike, but there’s no reason Democrats should be so stingy.

Qualifying unauthorized residents should be able to turn themselves in, pay a fine and make arrangements to pay back taxes, and in exchange become lawful permanent residents and have the same citizenship options as anyone else. The minority of unauthorized residents who don’t qualify for the program, due to either recent arrival or criminal history, will immediately find themselves at much greater risk of deportation than they currently enjoy since they’ll no longer be able to hide among millions of harmless people.

In tandem, the federal government should expand the use of the E-Verify system as far as possible. Research indicates that the use of this system, without requiring the expenditure of billions of dollars or grotesque human rights violations, successfully discourages the use of unauthorized labor and boosts earnings for Latino legal residents and citizens (there is no labor market impact on native-born whites). Widespread E-Verify rollout is impractical with millions of unauthorized residents currently enmeshed in our labor force, but it’s a natural complement to a generous legalization program.

With unauthorized immigration already way below its peak levels of the mid-aughts and border security already having received massive funding increases in past years, there’s no particular reason on the merits to throw more and more cash at the problem. A simple swap of E-Verify for legal status ought to be enough to move on to the question of how to manage future flows of immigration.

The key goal for future immigration should be to boost incomes for middle-class Americans.

Earlier rounds of research are fairly clear that the kinds of immigration flows we currently have do this in a minor way, but we could do far better. One mechanism should be opening the floodgates of highly compensated foreign professionals. The economist Dean Baker observes that under current law, “foreign-trained doctors must complete a US residency program before they are allowed to practice in the United States” meaning that “even a well-established physician in a country like Germany or the Netherlands would get arrested if they came to the United States and tried to compete with our doctors.”

We should replace this requirement with, instead, a clear set of standards that foreign medical professionals — doctors, dentists, etc. — must meet and then allow them to come here as they please. Imported foreign doctors won’t be a strain on the social safety net, will pay their fair share or more of state and local taxes, and will increase native-born Americans’ access to medical services.

By the same token, America’s current process of allocating H1-B guest worker visas to companies that want to hire foreign-born high tech workers is badly broken. Rather than tying visa recipients to a specific firm that brought them over, we should ensure that foreign tech workers who come here have normal rights to quit and switch jobs. In exchange, we should drastically increase the number of such workers who can come — if not eliminate the cap entirely.

This will create huge economic opportunities for the foreigners who get the visas — the earnings boost for such workers is over $50,000 even under the current restrictive system — some of which could be reappropriated in the form of a special employer-side payroll tax, while the presence of many more highly paid workers in the country will create new economic opportunities for Americans to sell them things.

Last but by no means least, liberals should acknowledge that the Trump administration’s vision of allocating green cards based on likely labor market success rather than family connections has merit. Trump’s plan falls short in calling for a 50 percent reduction in the number of green cards and in completely rejecting family ties as a factor. A better approach would be to actually emulate the Canadian system that Trump claims to favor: Consider family ties as one relevant factor alongside education and language skills, and allow for a large number of visas.

Then we could turn to the question of security.

A rational approach to the border

Obviously we shouldn’t have people sneaking across the border, getting caught, then claiming asylum. But the fix to this isn’t harsh punishment, it’s letting people claim asylum at the proper ports of entry rather than turning them away and treating those who sneak through like criminals.

While the mere fact that you brought a child with you shouldn’t give you unfettered license to break the immigration rules, there’s no need to be turning our military bases into prison camps for children.

As my colleague Alexia Fernández Campbell has written, the Intensive Supervision Alternative Program, which relies on ankle bracelets rather than cages to keep track of asylum seekers, has a 99.6 percent compliance rate and costs hundreds of dollars less per week to implement. UCLA criminologist Mark Kleiman has argued that we should probably be using monitoring instead of prison as a general crime-control strategy, but the unique humanitarian issues with asylum-seeking families makes it a great place to start.

Beyond straightening-out the asylum-claimants’ situation, we should probably be doing less to secure the border rather than more. The recent tendency of Customs and Border Patrol to start policing the northern border as aggressively as it monitors southern Texas has shed light on the basic conflict between aggressive border enforcement and American citizens’ right to move about the country as free people.

Border Patrol agents shut down I-95 southbound in Maine. “If you want to continue down the road, then yes ma’am. We need to know what citizen — what country you’re a citizen of,” an agent said.
This is insane.https://t.co/ZPUnXtrTHm

CBP currently enjoys expansive powers to conduct roadblocks and citizenship checks within 100 miles of America’s external borders — including the oceans — meaning that the entire populations of Seattle, New York, Boston, Chicago and all of Florida are considered to be in the border zone. We ought to take a drastically more restrictive view of the “border” status of America’s coastal population centers, demilitarize the untroubled border with Canada, and at least provisionally shrink the southern border zone in light of the dramatic decline in unauthorized crossings over the past 10 years.

A prudent law would establish a trigger for restoring more extraordinary measures if unauthorized crossings increase, but as long as the situation is relatively calm, we should prioritize the freedoms of America’s legitimate residents over border paranoia. Overall, the lodestar of US immigration policy should be to maximize benefits for American citizens, not maximize hostility toward foreigners.

Fundamentally, an affirmative progressive immigration agenda ought to view the desire of millions of foreigners to live and work in the United States as a source of national strength.

Despite China’s impressive record of economic growth over the past 25 years, people are clamoring to move here, not there. That’s an opportunity for the United States to maintain its stature as the world’s largest economy and only superpower, while raising incomes for native-born Americans and reducing income inequality.

The key is to recognize that while it’s important to have immigration laws, twisting ourselves into knots over our failure to achieve a target of perfect compliance with them — a standard that we don’t meet in any other area of the law — is a recipe for national madness. We ought to approach immigration law in the same way we approach anything else, trying to identify cost-effective enforcement mechanisms and balancing the costs of enforcement against the generally modest benefits.

We shouldn’t allow obsession with rule-breakers to blind us to the huge opportunity we are leaving on the table. Many law-abiding people would love the chance to contribute to American prosperity but are barred from doing so by current rules.

An influx of medical professionals, high-tech workers, and other professionals could address critical roadblocks in our current economy. Work permits and a path to citizenship will let millions of long-settled undocumented workers reach their full potential. Emphasizing skills as a criteria for immigration rather than as an excuse to cut it can make us all better off.

Of course the legislative process will necessarily involve compromise. But it’s long past time to recognize that Trump’s ascendancy signals the end of an immigration politics that makes the quest for compromise its central goal. It’s time for progressives to come up with solutions of their own.