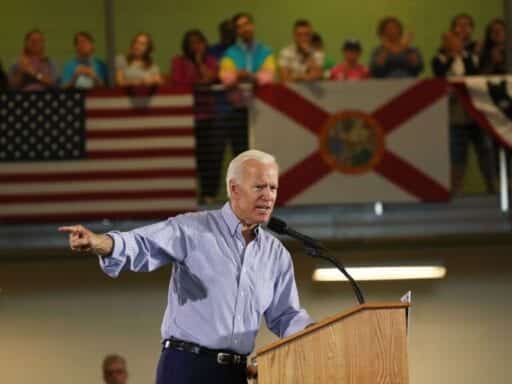 There’s a method — and a cause — to the madness.

On Wednesday, Joe Biden tweeted the kind of bland call for calm and all-around decency and togetherness that’s become customary in highbrow quarters of American politics, in response to a wave of attempted bombings of Trump critics.

“This country has to come together,” the former vice president and 2020 presidential aspirant said. “This division, this hatred, this ugliness has to end.”

This country has to come together. This division, this hatred, this ugliness has to end.

It’s a nice sentiment, but, much like the current wave of commentary vaguely blaming “tribalism” for the country’s political woes, its lack of specificity deprives it of force.

This is, of course, a vast and diverse country. Its population of more than 300 million people includes all kinds of weirdos, assholes, and maniacs of varying political perspectives, and a generalized push toward niceness and decency would be welcome. But there is also a very specific thing happening in the current American political environment that is driving the elevated level of concern. And that thing is not just a nameless force of “division.”

It’s a deliberate political strategy enacted by the Republican Party, its allies in partisan media, and its donors to foster a political debate that is centered on divisive questions of personal identity rather than on potentially unifying themes of concrete material interests. It’s a strategy whose downside is that it tends to push American society to the breaking point, but whose upside is that it facilitates the enacting of policies that serve the concrete material interests of a wealthy minority rather than those of the majority.

That’s what’s going on, and it’s time to say so.

Republicans are trying to mislead voters about regulations on preexisting conditions, and about their tax policy — leading up to an aspiration to reduce the deficit by cutting Medicare, which would create room for further tax cuts. At a time when 62 percent of voters say the federal government should do more to protect the environment, Republicans want to do less.

One potent strategy for getting over with this kind of toxically unpopular agenda is to lie about it, which is why Republicans are lying so much about their policies on taxation and health care. But while lying can be a sound political strategy, extended discussion of the topic that one is lying about tends to risk discovery, which is why Republicans get ornery when people try to corner them with extended policy discussions.

WATCH: Caught lying about her vote to gut pre-existing conditions protections, frustrated @MarthaMcSally said to reporters today: “Can we please talk about the things that matter to most voters?” Yikes. #AZSen pic.twitter.com/DYmOUnNwOX

The go-to strategy, then, is to exploit the hack gap in order to fill the news agenda with various kinds of nonsense.

Biden is right, of course, that the upshot of that divisiveness is deplorable and bad for the country. It would be much healthier for American society to have a calmer, kinder, more rational political dialogue more focused on addressing the concrete problems of the majority of the country. But while society overall would be healthier with that kind of politics, Donald Trump personally would not be better off. Nor would the hyper-wealthy individuals who benefit personally from the Republican Party’s relentless advocacy of unpopular regressive tax schemes.

The American people were not crying out for the Trump administration to legalize a pesticide that damages children’s brains and then follow it up with a ruling to let power plants poison children’s brains, but the people who own the pesticide factories and power plants are sure glad that we’re screaming about a caravan of migrants hundreds of miles away rather than the plutocrats next door.

Combating this strategy of demagoguery and nonsense is difficult, but the first step is to correctly identify it rather than spouting vague pieties about togetherness.

Your Echo is about to share your internet with your neighbors. Here’s how to opt out.
Life Itself is a disaster of a movie, caught in a web of its own privilege
Dozens of cities across the country are imposing curfews. Do they work?
Unexplainable: A new podcast about the most fascinating unanswered questions in science
Why Trump and Mitch McConnell are pushing through Fed nominee Judy Shelton
Costa Rica has an ambitious new climate policy — but no, it’s not banning fossil fuels