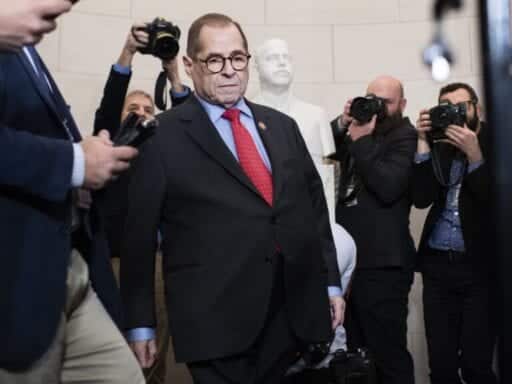 It’s the latest twist in the back-and-forth over whether to accuse the president of bribery.

Democrats on the House Judiciary Committee released a report on their impeachment articles Monday — and more than 100 pages into it, they accuse President Donald Trump of committing “multiple federal crimes.” Specifically, the report claims that Trump’s efforts to condition a White House meeting and military aid to Ukraine on investigations he desired violated federal bribery and wire fraud statutes.

Though the rest of the document — which sums up the case for impeachment — isn’t particularly earth-shattering to anyone who’s been following the impeachment inquiry, that bribery claim is a bit surprising because it doesn’t appear in the two articles of impeachment Democrats approved last week. Those articles avoided the word “bribery” and instead framed Trump’s offenses as “abuse of power” and “obstruction of Congress.”

But the backstory here is that, for over a month now, Democrats have been split over whether they should make the case for “bribery” — for both legal and political reasons.

Rather awkwardly, Democrats have flipped back and forth between accusing Trump of “bribery” and using less-charged terms. Republicans hammered them for this inconsistency in last week’s markup, accusing them of conducting a “focus group impeachment” (House Democrats’ reelection committee did indeed conduct focus groups on the term) and proclaiming that the eventual omission of bribery meant Trump was off the hook.

These new claims in the Judiciary Committee’s report appear to be an effort to push back on all of that. “Although President Trump’s actions need not rise to the level of a criminal violation to justify impeachment,” the report reads, “his conduct here was criminal.”

How bribery came into the impeachment picture and then left it

Initially, the debate over Trump’s actions in the Ukraine scandal was framed in terms set by Trump himself: whether there was, in fact, a “quid pro quo” between him and the Ukrainians. (There were, in fact, two: one involving a White House meeting for President Volodymyr Zelensky in exchange for an investigation into the Biden family, and another involving a hold on hundreds of millions of dollars in military aid for Ukraine unless the investigation was announced.)

But almost immediately, debate began among both Democrats and outside observers about whether Trump’s actions could be characterized as bribery.

“The federal bribery statute makes it a crime for a public official to demand anything of value in exchange for performing an official act,” former prosecutor Barbara McQuade wrote for the Daily Beast in September. “Trump may be similarly committing bribery and extortion by using the power of his office to demand a thing of value, dirt on Biden, in exchange for an official act, the provision of $250 million in military aid.”

The merits of a potential bribery case were hotly debated in the legal community. Renato Mariotti, another former prosecutor (and no fan of Trump), has argued that characterizing “a foreign government launching an investigation” as “payment” for a bribe is “odd.” For Lawfare, educators Josh Blackman and Seth Barrett Tillman wrote that this bribery theory might mean that “the executive branch could come to view routine political compromises and horse-trading as illegal.”

Yet an explicit framing of bribery, it seemed, could provide several advantages for Democrats’ impeachment case:

Shortly after those focus groups, House Speaker Nancy Pelosi directly accused Trump of committing bribery. “The devastating testimony corroborated evidence of bribery uncovered in the inquiry,” Pelosi said on November 14, after which other Democrats shifted their message accordingly.

Then, when the Judiciary Committee held its first hearing on the Ukraine scandal two weeks ago, a presentation slide listed “impeachable offenses.” But rather than standing on its own, bribery was lumped in there with “abuse of power.”

On the screen in the hearing room…future articles of impeachment?

The first two are likely, the third is still being debated by Democrats pic.twitter.com/89d1dg82Hw

However, when Democrats actually unveiled their articles of impeachment last week, bribery was MIA. Article I was “abuse of power,” and Article II was “obstruction of Congress.” (The other potential offense listed on the slide, “obstruction of justice,” would have been grounded in the Mueller report, but Democrats decided to limit their impeachment case to the Ukraine scandal.) And the Judiciary Committee’s own resolution states that Trump is being impeached for “high crimes and misdemeanors,” not for bribery.

So what happened to bribery? Asked about it last week, Pelosi gave a non-answer: “I myself am not a lawyer,” she said. “This is a decision that was recommended by our working together with our committee chairs, our attorneys, and the rest. So the articles are what they are.”

One possible explanation could be the aforementioned disagreements among legal experts with regards to bribery. Characterizing Trump’s actions as “abuse of power” may be a slam dunk, but characterizing them as “bribery” (or, more particularly, as being in violation of the federal bribery statute) is more controversial.

Politically, meanwhile, adding a dubious accusation of bribery to the articles of impeachment could be perceived as overreach, giving reluctant members of the chamber an excuse to vote no. (“I have not heard evidence proving the president committed bribery or extortion,” Rep. Will Hurd (R-TX) said a few weeks back, making clear his vote was no longer in play.)

Indeed, by December, McQuade, who initially argued that Trump’s actions could potentially be characterized as bribery, had concluded that Democrats would be on stronger ground by focusing instead on abuse of power. Accusing Trump of bribery would mean “allowing Republicans to quibble over legal definitions and factual conclusions as to whether one thing was conditioned on the other,” she wrote.

At some point, evidently, opinion in the Democratic caucus similarly shifted, and the party decided that “abuse of power” would be less controversial and easier to defend.

Of course, Republicans responded by arguing that Democrats had clearly failed to make a bribery case — and by trumpeting Trump’s supposed exoneration. “Lo and behold, there are now no bribery allegations in the articles,” Rep. Matt Gaetz (D-FL) said on Wednesday. “Another lie.”

Whether due to pique at these GOP criticisms or not, the 169-page impeachment report from committee Democrats includes a 10-page section arguing that Trump did, in fact, violate both a federal bribery statute and a wire fraud statute.

Democrats also added that Trump violated a wire fraud statute by doing these things over the phone (in both his conversation with Zelensky and in a call to US Ambassador to the EU Gordon Sondland).

So, Democrats write, “President Trump’s abuse of power encompassed both the constitutional offense of ‘bribery’ and multiple federal crimes. He has betrayed the national interest, the people of this nation, and should not be permitted to be above the law. It is therefore all the more vital that he be removed from office.”

It may seem odd to relegate these accusations of presidential lawbreaking to a relatively brief section, more than 100 pages into a 169-page report. But they may have done so because they don’t want to leave the misimpression that criminal conduct by Trump must be proven to justify a vote for impeachment.

In the end, the report lets Democrats have it both ways. They may have dropped the contested “bribery” language from their actual articles of impeachment on which members will vote. But they’re now also arguing that Trump’s not off the hook for bribery, either.

Jacob Blake speaks out about being shot by a police officer: “It’s nothing but pain”
Vote-by-mail and early voting prevented a turnout catastrophe on Tuesday
Israeli Prime Minister Benjamin Netanyahu is officially going to trial on corruption charges
Senators urge Trump to use Defense Production Act to make more Covid-19 tests
Why Tim Scott’s hopeful address was the RNC’s best speech
Another armed man has been arrested at a DC security checkpoint