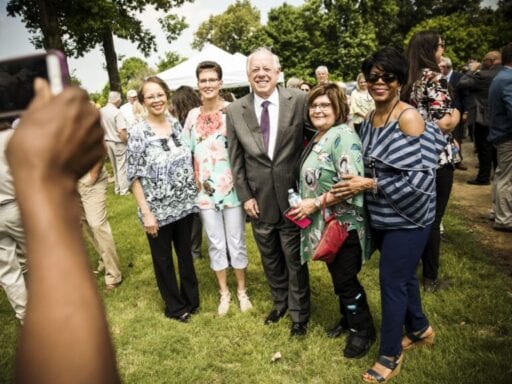 As Texas Democrat Beto O’Rourke catapults into rock-stardom for his long shot bid to unseat Sen. Ted Cruz, another Democrat in a red state — Tennessee’s Phil Bredesen — has a fighting chance, perhaps more so than O’Rourke, of bringing the blue wave to Trump country.

But Bredesen’s run for Senate isn’t making him a national celebrity — and he doesn’t want it to.

If he wins on Election Day, Bredesen will have mounted one of the biggest upsets of the year, and it will have gone largely under the radar. It’s by design. He is aiming to join the growing list of low-drama Democratic campaigns running against a very very loud Republican Party — and winning.

Trump maintains a 58 percent approval rating in Tennessee, so Bredesen isn’t running a #resistance-style campaign. A popular former governor, he is running as a measured, middle-of-the-road message to counter the Trump-loving Marsha Blackburn, a congresswoman whose opening message to Tennesseans was that the Senate wasn’t partisan enough.

“Too many Senate Republicans act like Democrats or worse,” she said in her first ad, promising to fight to repeal Obamacare and fund the border wall. In a recent Vanderbilt University poll, Bredesen had one-point edge over Blackburn. The Real Clear Politics polling average gives Blackburn a 6-point advantage in the race. (For comparison, Cruz is up by an average of 7 points, and though O’Rourke has come close, he hasn’t yet led in a single poll.)

Bredesen is making a bet that voters are tired of the Trump era of politics; they’re tired of hearing scandal after scandal out of the White House, sick of Sens. Chuck Schumer and Mitch McConnell’s spats, and exhausted by the fear mongering ads about undocumented immigrants jumping the border.

“People are over the drama,” one Democratic campaign aide told me. “They are tired of the fighting. They want us to talk about the issue and the issue is not the border wall — their issue is whether their kid is going to get off of opioids.”

In other words, Bredesen is hoping people want politics to be boring again.

Why a Democrat could win a Senate race in Tennessee

Bredesen says the most pressing issue facing Tennesseans is partisanship in Washington, DC. He blames both Democrats and Republicans.

“So many issues that affect Tennesseans economically and and in every other way are stalled in many ways because because of the lack of ability to Washington to engage with issues,” Bredesen said in his opening comments at a debate with Blackburn. “I think a lot of the problem in Washington is with the leadership we have there now whether it be whether it be a Ryan or Pelosi or McConnell or Schumer they’re not doing the job we need to get new leadership.”

Blackburn then turned to attack Bredesen for being a Democrat — she likes to say Schumer is paying for his campaign.

“Phil had a choice: he could have run as a Republican or an Independent,” Blackburn said in response. “He’s running as a Democrat so he will be with Chuck Schumer if he were to go to Washington.”

It was an exchange that perfectly captures this low-profile race for the Senate. Blackburn, despite her base-emboldening message, has failed to get a strong footing in the race, despite having the Republican cavalry behind her. Americans for Prosperity, the Koch network’s political arm and the Senate Leadership Fund together have spent close to $10 million on Blackburn. Trump, Vice President Mike Pence and Eric Trump have all come to the state and rallied for her. Still the polls show the two candidates neck in neck — and women in the state, who are more likely to vote, favor Bredesen.

A two-term governor, Bredesen is one of the last Democrats elected statewide and with any name recognition. And Bredesen isn’t trying to be a rabble rousing star in the Democratic party. He’s trying to be as apolitical — and inoffensive — as possible.

In the US. Senate race, his record as governor is being defined by the times he was most moderate — like having to make large cuts to the state’s Medicaid expansion program to keep the budget under control. He likes to talk about tariffs (Trump’s trade wars have put the state’s agricultural and auto industries at risk), and how the invasion of a kind of fish, the Asian carp is a real threat to the Tennessee economy. His Senate website even sells a baseball cap embroidered “Phil Bredesen Against Asian Carp.”

“He’s running a really good campaign with a very on target message: the theme throughout is that I’m not running against Trump i’m running for Tennessee,” Tom Ingram, Sen. Lamar Alexander (R-TN)’s former chief of staff, said.

Perhaps Bredesen’s boldest move in the race was his support for Supreme Court Justice Brett Kavanaugh, who was confirmed in the midst of several allegation of sexual assault against him. Bredesen, who faced backlash for the decision, said there wasn’t enough evidence to disqualify Kavanaugh.

The decision was perhaps his most politically fraught, but also the biggest display of this political calculus.

“He’s going to have to be very clear and repetitive about his independence from Democratic leadership,” Ingram said. “That’s the only path for a Democrat in Tennessee.”

Are boring Democrats the key to success in Trump country?

Nearly a year ago, Sen. Doug Jones (D-AL) proved a Democrat could win in the Trumpiest of Trump countries — Alabama. Then Rep. Conor Lamb (D-PA) gave a repeat performance winning a special election for Pennsylvania’s 18th congressional district, which voted for Trump by 20 points.

Bredesen would welcome the comparison.

There were certain extraordinary circumstances in Alabama; namely the Republican candidate, Roy Moore, was accused of multiple instances of inappropriate sexual behavior with teenage girls, one as young as 14, when he was in 30s, had questioned whether Muslims should be allowed to serve in Congress, and stated homosexuality should be illegal.

Moore, as a candidate, was as close to Trump as Republicans could get. In Pennsylvania, Republican state legislator Rick Saccone, a man who calls himself “Trump before Trump was Trump,” was trying to be.

Lamb and Jones were comparatively quite boring. They didn’t talk about about the Democratic party — other than to say they weren’t bound to it. They didn’t let Washington’s press corps in. Lamb, as The Atlantic’s Elaine Godfrey described him, was “pleasantly inoffensive — like vanilla ice cream or a pair of well-pressed khaki pants.” Jones, was the same, running on the less-than-rousing campaign messages of “quality, affordable health care,” and “discrimination cannot be tolerated.”

Being inoffensive, according to Jones’ campaign adviser Joe Trippi, a prominent Democratic strategist, it turns out, was key.

“I thought that Trump was actually driving people to want to end the chaos,” Trippi told Vox in December of last year after Jones won. “Even if you liked [Trump], you didn’t want more chaos in Washington than what he was already creating.”

The strategy is playing out across the country, from Rep. Jacky Rosen (D-NV) who is trying to unseat Sen. Dean Heller in Nevada, to Gretchen Whitmer in Michigan, who has been consistently leading the polls with her main message, “Fix the Damn Roads.”

In Tennessee, Bredesen is taking a page out of the same playbook: he’s keeping it to the “kitchen table issues,” his campaign aide said.

If being a boring Democrat is the model for flipping Trump-friendly states blue in 2018, it requires Democrats to correctly identify why Trump won. Trump won the Tennessee by 30 points in 2016; it’s a certainty that the state is conservative.

“There are two parts of Trump,” says John Geer, who directs Vanderbilt University’s political polling said. “One part is the anger in the rural areas about ‘Make American Great Again.’ The other part is [Trump’s] incivility — that part people don’t like.”

Tennessee’s Republican primary for the governor’s race was an early litmus test. Rep. Diane Black, a high-ranking, well established Republican politician was the early favorite, only to come third place, in what most Republican observers in the state saw as a failed attempt to out-Trump her opponents.

“Those that support Trump run a pretty wide ideological spectrum and what’s common about them is that they are frustrated voters that feel left out,” Ingram said.

Tennessee’s conservatism, in particular, has a more pragmatic streak. The current governor, Gov. Bill Haslam, and Sens. Lamar Alexander and Bob Corker are part of a dying breed of business-centric conservatives. Corker now-famously announced his retirement after vocalizing his deep concern about the direction Trump was taking the Republican party.

“We just always have been a state that has — minus me — not only elected more thoughtful folks, but also people that have been in many cases national figures,” Corker said. Former Vice President Al Gore — another notable bore — who very nearly unseated President George W. Bush in 2000, is from the state, as well.

Trippi explained the dynamic this way:

Trump’s creating energy among the Democratic base that wants to come out and wants to make the change and wants to do something to fight back against what’s happening. At the same time, he’s creating enough chaos and divisiveness and hostility that Republicans who would never ordinarily vote for a Democrat say, “Okay, well I’ve got all the chaos and hostility I can handle right now. I’ll vote for somebody who wants to try to find common ground and get things done for me, even if they’re a Democrat.”

As Blackburn rests on the notion that Bredesen has disqualified himself in Tennessee by simply having a “D” for Democrat by his name. Bredesen is making a very different bet: that Americans are tired of worrying about the fires being started in Washington.

“If Phil Bredesen is our next senator, people are angry about government,” Geer said.

Netflix and streaming TV were the biggest winners of the 2020 Emmy nominations
Mr. Robot’s final season is a brilliant argument for the show’s ongoing relevance
Trump’s “no panic” Woodward tapes spin would be easier to buy if his campaign weren’t all about pani...
What teen investors learned from the GameStop frenzy
Trump’s latest comments about the border indicate he doesn’t understand how trade works
Trump’s reelection polling is looking really bad