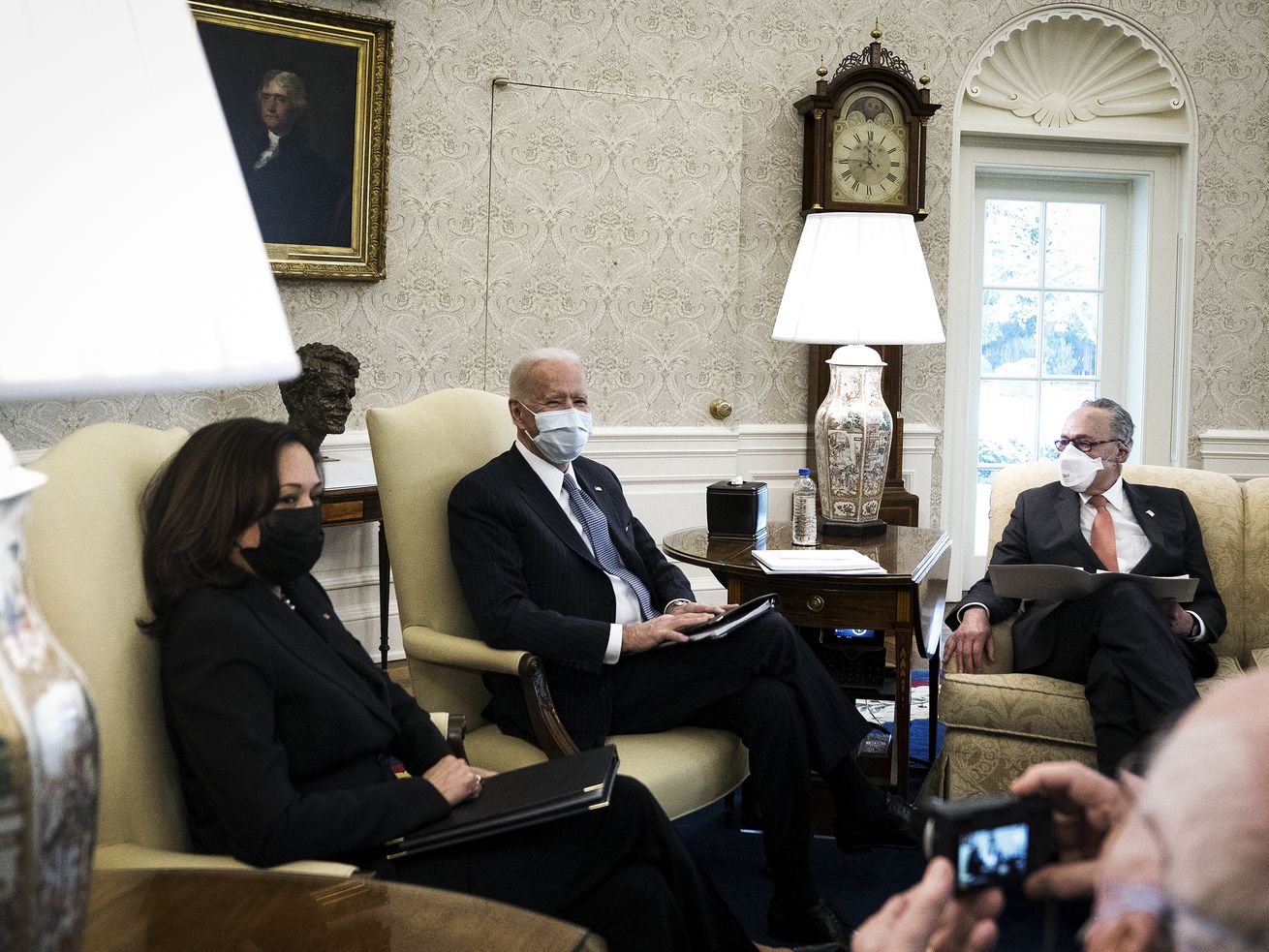 Democrats have unified political control in Washington. And so far, they’re acting like it.

Even as President Joe Biden negotiates with a group of 10 Senate Republicans on a potential bipartisan package, congressional Democrats are already teeing up budget reconciliation, a process by which they can pass Biden’s $1.9 trillion Covid-19 relief package with their 51 votes.

Those close to Biden say he deeply wants bipartisanship, but it can be a tough sell in a Democratic Party that has been burned over and over by Republicans.

The president “said basically I don’t want to go down the path in 2009 when we negotiated [with Republicans on the Affordable Care Act] for eight months and still didn’t have a product,” Sen. Joe Manchin (D-WV) said on MSNBC Wednesday morning.

Democrats have learned from the past. It’s not just memories of 2009; Republicans wielding budget reconciliation in 2017 to pass their tax bill and attempt to kill Obamacare are also fresh in their minds. In 2017, there was little attempt at bipartisanship from GOP. President Donald Trump and congressional Republicans rejected moderate Democrats’ attempts to work with them on their $1.5 trillion tax cut bill, after massive disagreement on the GOP’s plan to slash the corporate tax rate from 35 to 21 percent.

“That was a deal breaker; it was pretty much done,” former North Dakota Democratic Sen. Heidi Heitkamp told Vox in a recent interview. “Quite honestly, it was clear that the White House wanted to jam moderate Democrats like me, Claire [McCaskill], and Joe Donnelly.”

Working toward a bipartisan deal — or at least trying to — is part of Biden’s nature, but it’s also good politics. By negotiating directly with moderate Republicans, Biden is also trying to keep centrist Democrats like Manchin and Sen. Kyrsten Sinema (D-AZ) happy. Helping Senate Majority Leader Chuck Schumer keep his caucus in line may be just as important, if not more so, as finding areas of common ground with Republicans. Democrats are holding on to their Senate majority by a single vote; they have no room for error.

“Any senator who’s willing to act contrary to their leadership has power,” Heitkamp told Vox.

After four years of attempting to negotiate with Trump, a man who had little knowledge of or interest in how to deal with Congress, senators in both parties believe they have a savvy partner in Biden, a 36-year veteran of the Senate. So despite pressure from the base to charge ahead with a big package, a bipartisan deal — or, at the very least, a bipartisan amendments process on Democrats’ budget resolution — is still a live possibility.

“I believe that we have an opportunity here,” Sen. Chris Coons (D-DE), a close Biden ally, recently told Vox. “Not in 60 years have we had an incoming president who had as much experience in the Senate and as respect for the role of the Senate as Joe Biden.”

Democrats learned a lot about Republicans in the Obama era

From his time as Obama’s vice president, Biden understands well how difficult it was for the Obama administration to negotiate not only with Republican senators but with moderate Democrats as well.

There was a bigger group of moderate Democratic senators in the Obama era, including Kent Conrad (ND), Ben Nelson (NE), Max Baucus (MT), and Blanche Lincoln (AR) — all of whom strongly insisted on bipartisanship during pushes for stimulus and the Affordable Care Act. Some of them were in seats of power; Conrad chaired the Senate Budget Committee with purview over the budget reconciliation process. Baucus, meanwhile, presided over the Senate Finance Committee — where he had a hand in months-long negotiations with Republicans over Obamacare, which ultimately went nowhere.

Multiple former Obama administration officials told Vox that conservative Democrats concerned about the national deficit limited what was possible. Obama’s administration didn’t even entertain the idea of proposing a stimulus bill over $1 trillion, believing it was dead on arrival among Democrats.

“There was just a great political constraint, both from Republicans and also the Kent Conrad faction of the Democratic Party that didn’t want to see what it saw as excessive debt accumulation,” Larry Summers, director of the National Economic Council under Obama, told Vox. “Certainly, we would have preferred more stimulus.”

This is the context informing current Covid-19 stimulus negotiations. In retrospect, Democrats know the 2009 stimulus bill was much too small to really restart the economy. Economic growth was sluggish for years, giving Republicans an opening to retake Congress in the 2010 midterms. Democrats know the economic recovery coming out of the pandemic needs to be strong; Biden’s top economists have repeatedly argued the bigger risk is doing too little, not too much.

These days, Manchin is seen as the most conservative Senate Democrat. But Manchin’s “red line” is less fiscal responsibility, and more making sure the budget reconciliation process allows for input from Republicans and Democrats alike, he recently told CBS. He and other centrist Democrats seem to be at peace with the $1.9 trillion price tag on Biden’s plan (or something close to it), as well as the idea of passing it on a party-line vote if Republicans continue to withhold their support.

As long as Republicans are able to have their say, and no one asks Manchin to blow up the Senate filibuster, the West Virginia senator seems eager for more relief money. Plus, Manchin is already looking ahead to an infrastructure package down the road, which he’s suggested could be anywhere from $2 trillion to $4 trillion over a decade.

“We have come the last four years of doing a lot of paying for nothing,” Manchin told Vox recently. “Wouldn’t it be something if we had the vision of looking down the road for a 10-year infrastructure package?”

For all the Republican complaints about Democrats moving forward with budget reconciliation, it’s a legislative tool the GOP knows well.

After sweeping the presidential and congressional races in 2016, Republicans were quick to use budget reconciliation to do two things: attempt to overturn the Affordable Care Act in July 2017, and pass a massive tax cut in December 2017. Republicans attempt to use only GOP votes to overturn the health care law failed when three of their own — Susan Collins (ME), Lisa Murkowski (AK), and John McCain (AZ) — bucked leadership.

But when it came to their tax bill, Republicans were far more united.

In late 2017, the Senate’s red-state Democrats were, for lack of a better term, pissed off. The group of five Democrats including Manchin and Heitkamp represented states former Trump won overwhelmingly in 2016. They were staring down difficult midterm elections; indeed, just Manchin and Sen. Jon Tester of Montana survived their races.

These Democrats who hailed from states Trump won in 2016 had every reason to attempt to work with Republicans. After meeting with Trump and Republicans at the Library of Congress, they soon realized that Trump was laser-focused on lowering the corporate tax rate from 35 to 15 percent (eventually, Republicans settled at 21 percent). Trump’s White House had no interest in compromising with moderate Democrats; White House officials wanted to railroad them in the 2018 midterms instead.

“It was just a big giveaway to corporations who didn’t need a tax break,” Heitkamp remembered. “It was not strategic in any way, shape, or form; you knew it was going to be a budget buster.”

Back in November 2017, a visibly frustrated McCaskill told Vox that when she tried to engage Senate Republicans on the tax bill, she was met with radio silence.

“I’ve actually talked to Republican senators about working with them, and it’s very clear to me that Mitch McConnell and Paul Ryan decided they were going to do this the way they wanted to do it, which meant just with Republican votes,” McCaskill told me.

Now Democrats have the leverage.

“The amount of hypocrisy that I see today in Congress worrying about the deficit, when you’ve got people in food lines in this country and they want to preach austerity,” Heitkamp said.

Even though Democrats look ready to charge ahead with large relief packages, a bipartisan deal isn’t entirely out of the question. A group of Senate Republicans has been slowly laying the groundwork for deals with Democrats for months.

A group of eight Republicans and Democrats gathered around Murkowski’s Washington, DC, dining room table in November. Fed up with months of a leadership stalemate and a struggling economy, they began talking. They ended up being the catalyst for a $900 billion coronavirus aid bill in December.

“The silence from leadership in the House and Senate was deafening. There was no motivation for either side to move forward with a proposal” in November, Murkowski told Vox in a recent interview. “It was because we had built a sense of trust with one another; the dialogue was very direct, but people did not give up and walk away.”

This bipartisan group now has grown to 20 members and is the main faction that Biden’s White House is negotiating with on its massive Covid-19 relief package. It’s an open question whether they’ll continue to operate as a bloc. Over the weekend, 10 Republican senators including Murkowski and “Mod Squad” founding members Collins, Mitt Romney (UT), and Bill Cassidy (LA) struck out on their own, presenting Biden with a $618 billion Covid-19 relief counteroffer.

Biden spent over two hours talking with the Republican senators on Monday night, but the president wants to hear a much higher number than the opening bid Republicans presented.

“There’s obviously a big gap between $600 billion and $1.9 trillion,” White House press secretary Jen Psaki told reporters on Monday. “Clearly, he thinks the package size needs to be closer to what he proposed than smaller.”

The new president will also have to cultivate goodwill with moderate Republican senators for everything else he wants to do beyond budget reconciliation — which could be a lot. Biden has already introduced an immigration bill as another top priority of his administration, and there will likely be many more things that Democrats can’t pass using budget reconciliation.

“If they want to get it moving fast, work with us on a bipartisan solution, and then use your political muscle with reconciliation later on,” Murkowski told Vox. “But at least show evidence of the value of working together. If we move toward reconciliation, I wonder what signal that sends to those of us who want to try to advance solutions that might not be 100 percent solutions but are 80 percent solutions.”

One Good Thing: Vintage Nintendo games are good vibes made playable
Trump has passed on every chance to unite the country during the pipe bomb crisis
Is it safe for day care centers to be open right now?
Voters approve legal marijuana in South Dakota
Trump’s latest Syria announcement is the clearest articulation of his foreign policy doctrine
Mike Pompeo’s RNC speech will place him as the most partisan secretary of state in decades