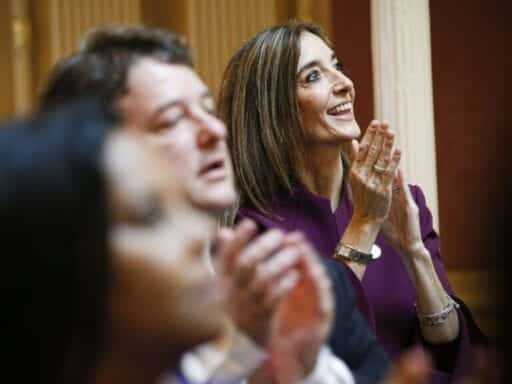 Share
Loading...
Virginia House of Delegates Minority Leader Eileen Filler at the start of the 2019 session of the Virginia General Assembly in Richmond, Virginia on January 9, 2019. | Steve Helber/AP

Democrats captured both the state House and Senate.

After 20 years of Democrats being out of power in the Virginia House of Delegates, a blue wave has swept the state capitol in Richmond.

Democrats pulled off a major win on Tuesday night, taking both the state House and state Senate. This ensures a trifecta: Democrats will have a majority in both legislative chambers, and the party is led in the state by Gov. Ralph Northam. Decision Desk called both races as of 9:30 pm Tuesday.

Tuesday’s elections were further evidence that once-purple Virginia is trending more and more solidly blue. Republicans have not won a statewide political office since 2009, but had hung onto power in the state legislature in part due to past redistricting that a court deemed a racial gerrymander. (The court ordered districts redrawn ahead of the 2019 election.)

It’s also evidence that Democrats are fired up and organized even on the state level. In the run-up to the 2019 elections, some grassroots activists told Vox they were seeing major enthusiasm, even for an off-year election where the biggest races on the ballot were for state lawmakers, instead of a governor’s or US Senate race. That could bode well for Democrats ahead of an all-important presidential election year.

Beyond the political implications for both Democrats and Republicans, tonight’s win also has some major policy consequences. Republicans in the House of Delegates had typically served as the stopping point for any Democratic legislation on a number of issues, including getting rid of right-to-work laws, raising the minimum wage, and passing gun safety provisions.

Even though Virginia passed Medicaid expansion last year when a handful of Republicans decided to support the bill, health care still ranks as a top issue for many Virginia voters — and the new majorities could bring sweeping changes.

Voters are still frustrated with the high cost of prescription drugs, and Democrats want their new majorities to fight back against Republican bills that would allow insurers to not cover those with preexisting conditions.

“They’re still feeling like there’s a heavy expense for prescription drugs, and they want to know how you’re going to try to get some of these costs down,” Virginia state Delegate Lashrecse Aird (D), who represents a predominantly minority district, recently told Vox about her constituents’ concerns.

Another huge issue that has come up both in Aird’s community as well as around the state is the issue of gun violence. In June, Northam called a special legislative session to address gun violence after a mass shooting in Virginia Beach claimed the lives of 12 people. Ultimately, the session didn’t yield any progress; Republicans adjourned it after just 90 minutes, without taking up a single bill. Now that his party controls the legislature, Northam may be encouraged to try again.

Democrats statewide are also eyeing a laundry list of other priorities that have been blocked by Republicans in the past, including raising the minimum wage to $15 per hour and passing a state Equal Rights Amendment that would give civil rights protections to LGBTQ individuals.

Tuesday’s election just paved the way for some of those ideas to potentially become law.

Why police encouraged a teenager with a gun to patrol Kenosha’s streets
Everything’s scary. What’s Halloween going to be like?
How Robert Pattinson transformed into a salty lighthouse keeper for his new movie
Midterms 2018: the battle for state legislatures
Kentucky’s new governor is giving the right to vote back to 140,000 ex-felons
3 winners and 4 losers from a very long Election “Day”