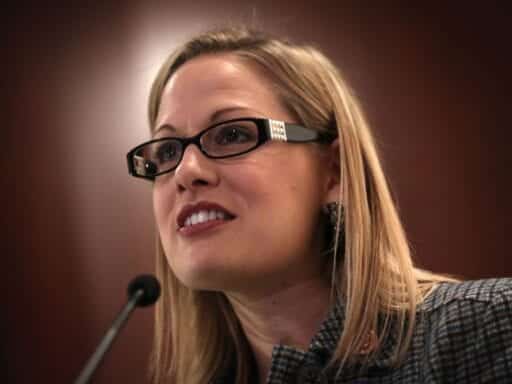 “I am not going to vote for him,” she told Politico in a recent interview, becoming the first potential Senate Democrat to withdraw support from Schumer. Even Senate Democrats running in states that Trump won haven’t gone this far.

Sinema isn’t the only Democrat running against her own party’s congressional leadership. A number of House Democratic candidates — from Pennsylvania’s Conor Lamb to New Jersey’s Mikie Sherrill — have started saying they won’t vote for House Minority Leader Nancy Pelosi if elected to Congress. Indeed, Sinema voted against Pelosi’s taking the speaker role in 2016.

Sinema is a rising star in the party and faces a tough Senate race in a typically red state in the contest to replace retiring Sen. Jeff Flake. It’s likely she hopes her independent streak will resonate with voters in a state where Republicans have an edge. The state’s population breaks down almost evenly into Republicans, Democrats, and unaffiliated voters, but still there are a few thousand more registered Republicans than Democrats.

Because Senate leadership elections take place behind closed doors with each person voting separately, a Sinema defection from Schumer poses no significant risk to his leadership. It would only be in jeopardy if he loses the confidence of a majority of the caucus.

Meanwhile, the divided Republican primary to choose Sinema’s opponent is messy. Though Rep. Martha McSally is the establishment favorite over the more Trumpian former state Sen. Kelli Ward and former Sheriff Joe Arpaio, so far, Sinema is leading each of her challengers in recent polling. A recent NBC-Marist poll has her up by 10 percentage points over Ward, 11 points over McSally, and 25 points over Arpaio.

Whether Sinema’s pledge to vote against Schumer is a deeply held belief or a savvy electoral move, it’s part of a broader trend of Democrats running in 2018. Democrats still face an uphill battle forretaking the House, and capturing the Senate — with so many endangered Democrats running in red state — looks near-impossible. But the energy and enthusiasm Democratic voters have shown in primaries and special elections this year suggests Democrats have a real shot at regaining power.

But much as that energy suggests Democrats are united against Trump, real trouble lies ahead. Superstar candidates like Alexandria Ocasio-Cortez ran and won on far-left platforms that include things like abolishing ICE and a federal jobs guarantee. Several candidates this year are running on Medicare for all, which some party leaders have considered too radical to seriously pursue. Now some of Democrats’ most promising candidates are saying they won’t support the existing party leadership if elected.

All this raises real questions about whether the party is truly ready for the transformation it is about to undergo.

Here’s everything you need to know about the November Democratic debate
Lockdown protests, Congress nears another stimulus deal: Monday’s coronavirus news
Immigration detention crisis: On social media, people ask #WhereAreTheGirls
Native American activists: The fire at Notre Dame is devastating. So is the destruction of our sacre...
The four crucial questions Jeff Bezos needs to answer about his $10 billion climate pledge
Photos: Uprisings across America over George Floyd’s death