Democrats to Trump: Russia is behind the 2016 hacks. Cancel your Putin meeting. 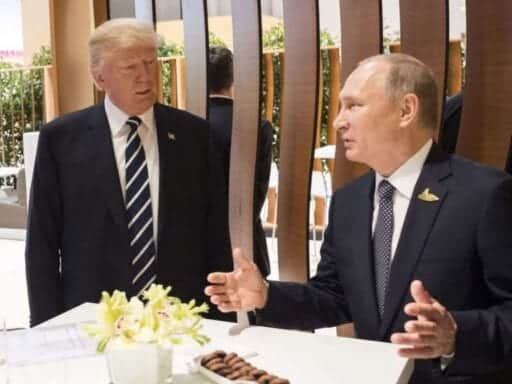 “Get your butt on a plane back to the United States.”

A growing number of Democrats are calling on President Donald Trump to cancel his meeting with Russian President Vladimir Putin on Monday in the wake of special counsel Robert Mueller’s indictment of 12 Russian intelligence operatives.

Mueller’s indictment alleges that Russian spies were behind high-profile hacks of the Democratic National Committee, the Democratic Congressional Campaign Committee, and the computer networks of Hillary Clinton’s campaign. It also explicitly accuses them of engaging in election interference.

Trump is scheduled to meet with Putin one-on-one in Helsinki on Monday. It’s a summit many Democrats would rather not happen, especially under these circumstances.

Senate Minority Leader Chuck Schumer (NY) argues that Trump should abandon the meeting unless Russia makes a clear commitment to steer clear of future US elections.

Sens. Elizabeth Warren (MA), Cory Booker (NJ), and Jack Reed (RI) were among the others to echo this sentiment, with Warren urging Trump to “cancel your ridiculous Putin summit and get your butt on a plane back to the United States.”

DOJ’s criminal charges provide hard evidence that Russian intel agents attacked America to boost their favorite candidates, undermine others, and influence our elections. @realDonaldTrump, cancel your ridiculous Putin summit and get your butt on a plane back to the United States.

“In light of this stunning indictment by the Justice Department that these Russian conspirators attacked our democracy and were communicating with Americans to interfere in our election, President Trump should immediately cancel his meeting with Vladimir Putin,” added Reed, the ranking member on the Senate Armed Services Committee.

Sen. Mark Warner, the top Democrat on the Senate Intelligence Committee — which has been conducting its own investigation into Russian election interference — asked Trump to press Putin on the subject and suggested that any meeting should be canceled if the president was unwilling to do so.

Warner also took issue with the way the meeting was set up. “There should be no one-on-one meeting between this President and Mr. Putin,” he said. “There needs to be other Americans in the room.” Warner expressed concern that the president’s penchant for “winging it” in meetings like this could enable Putin to take advantage of him.

“There should be no one-on-one meeting between this President and Mr. Putin,” Vice Chair of the Senate Intelligence Committee Mark Warner says following the latest Mueller indictments. “There needs to be other Americans in the room” https://t.co/RCB7YFOSv1

Booker, too, said that the meeting should either be canceled or turned into an “open meeting” so that Putin could be held accountable for the Russian government’s role in election meddling.

Pres Trump happily greeting Putin on Monday – the man who attacked our county – embracing him as a friend, should OUTRAGE all Americans.

Trump should cancel the meeting or make it an open meeting, confronting Putin on his aggression & taking measures to hold them accountable.

Both Reps. Adam Schiff (CA) and Ted Lieu (CA), meanwhile, were much more skeptical of whether Trump would actually turn up the heat on Putin. “Because it is abundantly clear that the president will not confront Putin on the charges laid out in this indictment and its predecessor … it is in the strong national security interests of the United States for the president to cancel any meeting with Putin,” Schiff said in a statement.

Despite the rising pressure for Trump call off the Putin meeting, however, press secretary Sarah Sanders has said that it’s still very much on, per a tweet from NBC’s Peter Alexander.

JUST IN: Despite calls for Trump to cancel Monday’s summit with Putin, Sarah Sanders tells me it’s “still on.”

As Vox’s Alex Ward writes, the timing of Mueller’s indictment announcement — just three days before the gathering — has prompted questions around whether the special counsel is, in fact, trolling the president. In the past, Putin has staunchly denied any Russian interference in the US election. Mueller’s indictment definitely makes it tougher for Trump to say he still believes Putin.

One of America’s worst acts of racial violence was in Tulsa. Now, it’s the site of Trump’s first ral...
Hurricane Florence: the danger of storm surge, explained
Kamala Harris’s mysterious Kasowitz question during the Kavanaugh hearings, explained
The best $40 I ever spent: A not-quite-tarot deck
A Trump appointee at the CIA urged the Justice Department to investigate Trump on Ukraine
Democratic women are picking up momentum in another 8 House races