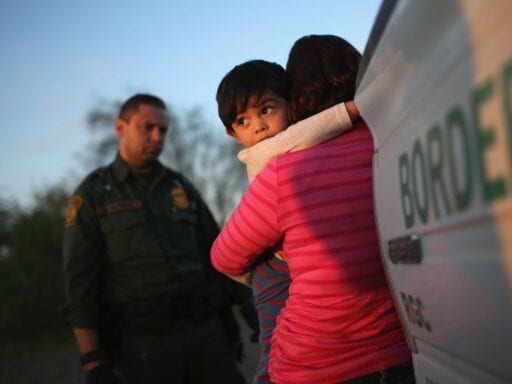 A 1-year-old from El Salvador clings to his mother after she turned themselves in to Border Patrol agents on December 7, 2015, near Rio Grande City, Texas. | John Moore/Getty Images

It’s just the Trump’s administration’s latest blow to the asylum system amid the pandemic.

The Trump administration is holding unaccompanied migrant children in hotels before rapidly expelling them from the US under a new policy that allows officials to turn away anyone who poses a risk of spreading coronavirus — even if they show no symptoms and are seeking asylum.

Lawyers from the American Civil Liberties Union asked a federal judge in Washington, DC, on Thursday to temporarily block the administration from enforcing the policy against unaccompanied migrant children nationwide. Instead, immigration officials must transfer the children to Department of Health and Human Services (HHS) shelters licensed to administer care to children and allow them to pursue claims for protection in the US with access to a lawyer and a full immigration court hearing, the lawyers argue.

And on Friday, Rep. Veronica Escobar (D-TX) called for an investigation of the policy and its effect on unaccompanied children, writing that they are “one of the most vulnerable populations in our immigration system and cannot be denied the protection they are entitled to under the law.”

The Department of Homeland Security doesn’t disclose where it is currently holding children subject to the policy. It also often moves children around from facility to facility, making them difficult to track. But acting Homeland Security Secretary Chad Wolf told Congress during a hearing earlier this month that the agency is continuing to contract with hotels to hold children, a practice that he said has been going on “for decades.”

The New York Times and the Associated Press reported that migrants have been detained at a Quality Suites in San Diego; Hampton Inns in Phoenix and in McAllen and El Paso, Texas; a Comfort Suites Hotel in Miami; a Best Western in Los Angeles; and an Econo Lodge in Seattle. But they are also being held in US Customs and Border Protection (CBP) facilities near the border, typically in cage-like settings, according to the ACLU’s lawsuit.

It’s just the latest in a long line of Trump administration policies designed to gut the asylum system on the southern border. Before the pandemic, officials were turning away tens of thousands of migrants at the southern border through the “Remain in Mexico” program, under which asylum seekers were forced to wait in Mexico, often for months at a time, for their immigration court hearings in the US. The new expulsion policy has largely replaced that program as a mechanism for keeping migrants out.

“They’re coming here because they have legitimate claims for humanitarian protection,” Steven Kang, an attorney for the ACLU, said Friday. “For this country turn them right around is not only wrong — it’s not what Congress wanted. This whole shadow deportation scheme bypasses and ignores all the important rights that Congress gave them.”

The government is skirting long-standing protections for migrant children

One of the plaintiffs in the lawsuit challenging the policy, a 16-year-old identified only as P.J.E.S. in court filings, had fled his home country of Guatemala after receiving death threats due to his father’s political opinions and because he refused to join a gang. He sought to join his father, who is currently living in the US and awaiting deportation proceedings. But when he arrived at the southern border, he was taken into custody by CBP in McAllen and subjected to the new rapid expulsion program.

Since the ACLU filed its lawsuit, the government voluntarily took P.J.E.S. out of the rapid expulsion program and sent him to an HHS facility. But many other unaccompanied children are still “regularly being held at hotels for multiple days—and frequently for more than 72 hours” or, alternatively, in CBP facilities near the border while officials arrange for their expulsion, according to the complaint.

The lawsuit argues that the children should be sent to an HHS shelter within 72 hours of their apprehension before being released to their family members in the US or a foster family. That’s required by a decades-old settlement agreement that the administration had unsuccessfully tried to amend such that children could effectively be detained indefinitely and in facilities that aren’t specifically licensed to administer care to children.

Though overcrowding of such facilities was a concern at the outset of the pandemic, HHS shelters are now operating at 5-10 percent capacity — well below normal, Kang said. That suggests that there is plenty of room to safely enforce social distancing and quarantine anyone who tests positive for Covid-19 or develops symptoms.

The lawsuit also argues that children have the right to an attorney and a full immigration court hearing to determine whether they are entitled to protections that would allow them to stay in the US, which is required by the Trafficking Victims Protection Act (TVPRA).

The government has argued that it has the authority to reject any migrant who poses a risk of spreading communicable disease under Title 42, a federal public health provision. Mark Morgan, the acting CBP commissioner, said earlier this month that the policy helps mitigate the risk of spreading the virus to anyone the migrants might come into contact with while being processed and in HHS shelters.

“We’re trying to remove them as fast as we can to not put them in our congregate settings, to not put them into our system, to not have them remain in the United States for a long period of time, therefore increasing the exposure risk of everybody they come in contact with to include the workforce of all those different entities that would be impacted,” Morgan said.

But those risks have to be weighed against the violations of children’s basic rights in immigration proceedings, attorneys say. The children being held in hotels have little means to challenge their own detention under the new policy. The children can’t effectively advocate for themselves, considering many of them don’t speak English and don’t have even a basic understanding of the US immigration system and their rights. They also have limited access to counsel — one Texas Civil Rights Project attorney was thrown out of a Hampton Inn in McAllen last month when he tried to gain access to the children and advocate on their behalf:

BREAKING: Our attorney was aggressively rejected from trying to offer help to immigrant children illegally detained at a Hampton Inn in McAllen, TX. He and another of our staffer were violently shoved into the hotel elevator and were told they could not offer help. #FreeThemALL! https://t.co/xSOxHOViKp pic.twitter.com/MEp7UmK6Gv

After the video of the attorney went viral, Hilton, which is Hampton Inn & Suites’ parent company, denounced the use of its hotels to detain migrant children, saying in a July 24 statement that it was “not activity that we support or in any way want associated with our hotels.”

“Our policy has always been that hotels should not be used as detention centers or for detaining individuals,” the company said. “We expect all Hilton properties to reject business that would use a hotel in this way. We are in the process of contacting all Hilton owners and management companies in the U.S. to remind them of our policy, and provide guidance on identifying and preventing this type of business.”

That suggests that DHS is no longer working with Hampton Inn & Suites and has found other contractors. But the agency hasn’t disclosed that information publicly or even to attorneys looking to represent the children.

“These locations are all secret so no one can gain access to them,” Kang said. “DHS has invested in keeping these locations hidden, which makes it really hard to offer the children legal counsel. And deportations happen so swiftly that by the time the kid contacts a relative, it’s too late and the kid has already been expelled.”