Dianne Feinstein at Kavanaugh hearing: Roe is about more than abortion 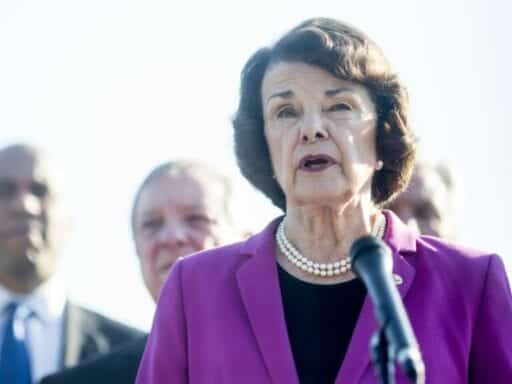 “The impact of overturning Roe is much broader than a woman’s right to choose,” the senator said.

If Judge Brett Kavanaugh’s confirmation as a Supreme Court justice results in the overturning of Roe v. Wade, women around the country could lose their right to an abortion. But as Sen. Dianne Feinstein (D-CA) pointed out at the confirmation hearing on Tuesday, that’s not all that’s at stake.

Much of the debate around Kavanaugh’s confirmation has centered on what the judge really believes when it comes to Roe. His comments so far have been vague and are likely to remain so. But, Feinstein said in her opening statement at Tuesday’s hearing, the judge’s record indicates he would likely be willing to overturn the landmark 1973 decision.

Doing so wouldn’t just strike an enormous blow to reproductive rights in America, she pointed out — because of Roe’s role in American law, overturning the decision could also threaten marriage equality and other freedoms.

Roe, Feinstein explained, isn’t just about abortion: “It is about protecting the most personal decisions we all make from government intrusion.”

Kavanaugh reportedly told Sen. Susan Collins (R-ME) last month that he considered Roe v. Wade to be “settled law.” But as Feinstein pointed out, that doesn’t mean much, since the Supreme Court has the power to unsettle the law.

In fact, the senator said, Kavanaugh may be perfectly willing to do just that. In his dissent last year in the DC Circuit Court case Garza v. Hargan, Kavanaugh opposed a ruling allowing an unauthorized immigrant teenager to receive an abortion while in federal care. He argued that since “the minor is alone and without family or friends,” she should be transferred to an appropriate sponsor before getting the procedure. In requiring the teenager to seek such a sponsor, Kavanaugh wrote, the government “is merely seeking to place the minor in a better place when deciding whether to have an abortion.”

This argument, Feinstein said at the hearing, “rewrites Supreme Court precedent. If adopted, we believe would require courts to determine whether a young woman had a sufficient support network when making her decision, even in cases where she has gone to court.”

Kavanaugh’s dissent, Feinstein argued, “demonstrates that you are willing to disregard precedent” — that is, that he’d be perfectly willing to unsettle “settled law.”

Moreover, she noted, President Trump has promised to “nominate someone who is anti-choice and pro-gun. We believe what he said.”

Overturning Roe would have wide-ranging consequences

Feinstein also spoke of her personal experience of the pre-Roe years. In the 1960s, as a member of the California Women’s Board of Terms and Parole, part of her job was sending women who had undergone illegal abortions to prison.

“What women have won through Roe,” Feinstein said, “to be able to control their own reproductive system and privacy rights, is extremely important to this side of the aisle and I hope the other side as well.”

And as she pointed out, “the impact of overturning Roe is much broader than a woman’s right to choose.”

Roe doesn’t exist in a vacuum. Instead, as Nancy Northup, president of the Center for Reproductive Rights, argued in the Washington Post earlier this year, “it resides in the middle of nearly a century of jurisprudence reaching backward and forward in time: expanding on the liberty protections that came before it and laying the groundwork for recognition of important future rights.”

Overturning Roe could have wide-ranging consequences for Americans’ personal liberty. “Roe is one in a series of cases that upheld an individual’s right to decide who to marry,” Feinstein said, as well as “where to send your children to school” and “the kind of medical care you can receive at the end of life.”

“I deeply believe that all these cases serve as a bulwark of privacy rights that protect all Americans from overinvolvement of the government in their lives,” Feinstein said. “To me, that is extraordinarily important.”

Quarantine cooking is about more than just feeding yourself
Amy Klobuchar drops out of the 2020 presidential race
America’s unique gun violence problem, explained in 17 maps and charts
FreedomWorks is supporting the anti-shutdown protests — and applying for government funding
A conservative critic attacked Alexandria Ocasio-Cortez’s credentials — and got a major fact wrong
Coachella 2019 fire: What we know