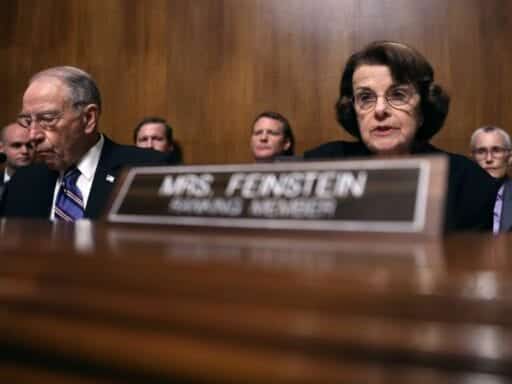 It’s not expected to hurt her in the midterms.

Move over, Nancy Pelosi, the right has a new boogeywoman.

In the wake of a bitter and contentious fight over Brett Kavanaugh’s Supreme Court confirmation, Sen. Dianne Feinstein has emerged as another key Democrat conservatives are using to rile up their base ahead of this November’s election. The top Democrat on the Senate Judiciary Committee and the senior senator from California, Feinstein has been on the receiving end of growing Republican ire ever since she referred a letter detailing sexual assault allegations against Kavanaugh to the FBI.

For much of Kavanaugh’s confirmation, Republicans refrained from directly attacking Christine Blasey Ford — the Palo Alto University professor who accused Kavanaugh of sexual assault — given the tricky optics of doing so. Instead, they trained their outrage on Democrats.

Since Feinstein not only leads the committee’s minority but also played a pivotal role in addressing Ford’s letter, she quickly became the focus of this onslaught. And that animus has only bled into the midterms.

During the confirmation hearings, Republicans accused Feinstein of using Ford as a political football and of leaking the letter to the press, something she’s denied.

With the Republican base fired up over Kavanaugh’s confirmation already, candidates for seats in both the House and the Senate appear determined to maintain that energy in the final weeks before the election. One way they’re trying to do it? Keeping up the attacks on Feinstein.

How Republicans have gone after Feinstein

In the same way that Republicans have historically framed individuals like Barack Obama, Hillary Clinton, Schumer, and Pelosi in order to suggest that specific candidates — especially those in red states — are more closely aligned with the Democratic establishment in Washington than they are with voters in their own districts, they are continuing to use that same playbook with Feinstein.

“It’s always been their game plan to attack Democratic leaders and say congressional candidate X or Y is just like them,” says Feinstein political strategist Bill Carrick. “Frankly, it feels like a big cliché.”

A recent ad opposing Jacky Rosen in Nevada attacks her for being “a Hillary person,” for example, and juxtaposes her likeness against clips of Clinton laughing. Many other ads have gone after candidates like Heidi Heitkamp and Joe Donnelly for supporting Pelosi and Schumer.

Feinstein has made an increasing number of cameos like this in various campaign ads.

“Using Feinstein puts a face on the argument, and that always makes it more effective,” says Cook Political Report’s Jennifer Duffy. In this case, Feinstein serves as a particularly fitting proxy for Republicans to call out as they seek to highlight remaking the federal judiciary as a key issue that candidates can campaign on. The NRSC did not immediately respond to a request for comment about the Tennessee ads in which she’s spotlighted.

And ads aren’t the only outlet where Republicans have been hammering this message.

Missouri Senate candidate Josh Hawley, who is up against vulnerable Democratic incumbent Sen. Claire McCaskill in November, has even called for a special counsel investigation into how Feinstein passed on the information about Ford’s letter, echoing congressional leaders like Sen. John Cornyn (R-TX) who have pressed for an ethics probe.

“They want to make this about something else than what’s happening in the states,” says Carrick.

In at least one place, it seems like this message is resonating

President Trump appeared to illustrate at a rally earlier this week in Council Bluffs, Iowa, that Feinstein has, indeed, proven to be an incendiary character who resonates with Republican voters.

During the event on Tuesday, Trump questioned how Feinstein approached Ford’s letter and the allegations she brought against Kavanaugh. “How about Senator Feinstein? That’s another beauty,” Trump said as part of remarks mocking the lawmaker’s response to inquiries about the leak. “Did you leak the documents? … ‘Huh, what? What? No, I didn’t …’”

As Trump spoke, the crowd began chanting a line that’s often been used to attack Hillary Clinton and her private email server. “Lock her up! Lock her up!” they shouted. This time, however, those chants were aimed at Feinstein.

The response seems to suggest that Feinstein has increasingly become somebody that at least some Republican voters view with hostility. Republican senators canvassed by the Hill broadly noted that they didn’t approve of Trump’s comments, in spite of their disagreement with Feinstein. “The president is responsible for his statements. I’m responsible for mine. It’s not something that I would say,” said Cornyn. Feinstein, meanwhile, said the remarks were simply part of Trump’s “technique of division.”

One area where experts say they don’t expect the increase in Republican attacks to make any dent is Feinstein’s midterms race in November, when she’ll face off against fellow Democrat Kevin de Leon in order to maintain her Senate seat. “Provoking harsh Republican criticism is not likely to prove harmful to her election chances,” says Robert Huckfeldt, a political science professor at UC Davis.