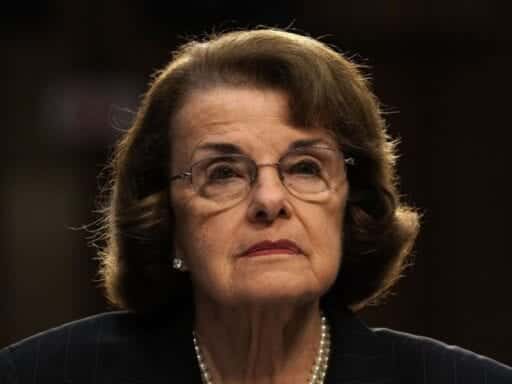 DiFi and other Democrats are stuck in an era that makes a false distinction between private conduct and public life.

Sen. Dianne Feinstein didn’t tell fellow Democrats on the Judiciary Committee that she’d received a letter accusing Brett Kavanaugh of attempting to force himself on a woman while both were in high school because, as the New Yorker reports, she didn’t want his confirmation hearings to be about his private life.

“Feinstein also acted out of a sense that Democrats would be better off focussing on legal, rather than personal, issues in their questioning of Kavanaugh,” Ronan Farrow and Jane Mayer write.

Her actions support Farrow and Mayer’s description. As the top Democrat on the Judiciary Committee, Feinstein spent the summer crafting her party’s line of questioning for the confirmation hearings that just ended. She omitted the allegations. She kept the letter from the FBI until the Intercept reported its existence. She never asked Kavanaugh about it, in private or in public. She did not even tell her fellow Democrats she had it.

Strategically, Feinstein could have had a valid reason to keep the allegations quiet. If the contents of the letter weren’t solid, the decision to go public could backfire if they fell apart under intense scrutiny. But that doesn’t seem to be her logic.

Feinstein seems to believe that what a powerful man has allegedly done in a bedroom, even criminal behavior, is irrelevant to what he might do in a courtroom. She’s stuck in an era that differentiated between “personal” and “public” conduct, even when the two clearly intersect, as they do in this case.

Whether or not Kavanaugh committed a serious sex crime is directly relevant to the job. If confirmed, he is sure to review laws on sexual assault, domestic violence, workplace harassment, and other women’s rights issues, including reproductive health, in the coming decades. Assuming these allegations are true, has he ever taken responsibility? Has he contended with his behavior? Or does he reject the legal standard for this type of crime?

The question of what is “private” conduct versus what is relevant to “public” life is one Democrats still grapple with when it comes to Al Franken. Some Democrats argue that too much weight was put on accusations by women who say he touched them inappropriately, rather than his contributions as a senator. Franken has said he’s unsure whether the accusations are true. He has denied some.

The politics of the Franken situation at least added up. Supporters see his departure as a huge loss to the party. He’s a rare liberal communicator who can go toe to toe with the big TV stars of conservative media. They also see ousting him as holding themselves to a higher standard than Republicans, who voted in Donald Trump.

But Kavanaugh is a liberal foil, a conservative with opposing views on nearly every legal question. Feinstein’s decision to keep the letter from public view through the hearings is a stunning example of how far the powerful will go to protect the status quo, even putting it above partisan politics, above other women, and above the politics of the #MeToo era.

For his part, Kavanaugh denies the incident ever happened: “I categorically and unequivocally deny this allegation. I did not do this back in high school or at any time.” Republicans are pushing to keep his vote on track, pointing out that Democrats had months to address this allegation but chose not to, not even during confirmation hearings that went on for days. Kavanaugh could very well be confirmed before the claim is ever considered.

On Friday, Feinstein’s office defended the senator’s decision to keep the letter under wraps, arguing that she’d had the alleged victim’s privacy in mind.

An office spokesperson released a statement saying: “Senator Feinstein was given information about Judge Kavanaugh through a third party. The Senator took these allegations seriously and believed they should be public. However, the woman in question made it clear she did not want this information to be public. It is critical in matters of sexual misconduct to protect the identity of the victim when they wish to remain anonymous, and the senator did so in this case.”

The woman in question asked for anonymity; she didn’t ask for inaction. Why would she write to Feinstein? Why write to her member of Congress, Democratic Rep. Anna Eshoo? For generic catharsis? No. She was asking for action. Feinstein is doing nothing with protecting her identity.

Feinstein could have kept the woman’s name private while investigating. For example, the New Yorker tracked down the friend who the woman said turned up the music during the alleged assault without ever releasing his name or hers.

Abusers rely on silence. They hope their victims will fear not being believed, that they’ll fear stigma, that they’ll feel too much shame to speak up. That’s why #MeToo is so radical. Its goal is to give voice to victims en masse.

But Feinstein is missing the moment. She chose silence. And we almost didn’t get to hear this woman at all.

Apollo 11 is a truly stunning new way to see the moon landing
All the near-total abortion bans passed this year have now been blocked in court
How to make sure Congress can still function if its members are quarantined
“Our calm is contagious”: How to use mindfulness in a pandemic
Trump’s “PRESIDENTIAL HARASSMENT” tweets are an insult to #MeToo
Vox Sentences: What happens in Finland stays in Finland