Did Brazilians vote against democracy on Sunday? 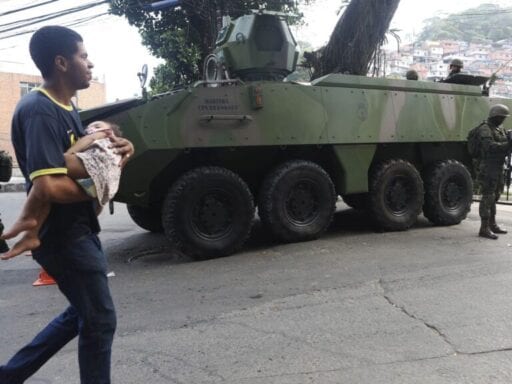 Bolsonaro supporters don’t object to democracy, but they really like the military. What will happen when the military and democracy conflict?

On Sunday night, Brazil’s military spontaneously paraded in the streets of Rio de Janeiro to celebrate the electoral victory of Jair Bolsonaro, a far-right politician who will become president of the world’s fifth-largest country. Earlier in the day, Bolsonaro had soundly defeated Fernando Haddad, a center-leftist politician from the Workers’ Party of former presidents Luiz Inácio “Lula” da Silva and Dilma Rousseff.

But while the military celebrated, international observers expressed dismay. Liberals have been shocked by Bolsonaro’s disparaging views of Brazil’s LGBT community, women, and minorities. Of greater concern to supporters of liberal democracy, Bolsonaro is a proponent of rescinding the human rights of criminals, vowed to prosecute his political opponents, and has voiced support for military dictatorship.

On Sunday afternoon, while military men celebrated, Harvard political science professor Scott Mainwaring told reporters that he couldn’t “think of a more extremist leader in the history of democratic elections in Latin America.” Academics have been issuing dire warnings for months. One of the most prominent prophets, Steven Levitsky — also a Harvard political scientist — predicted this summer that Brazil’s democracy may “die at the hands of an elected leader.”

Did Brazilians take these warnings seriously? How did citizens’ attitudes toward the country’s 33-year-old democratic regime affect Sunday’s election results? Did Brazilians intentionally vote against democracy?

Our new panel study, Brazilian Democracy in the Balance, reveals that support for democracy and trust in the military profoundly shaped election outcomes. For three waves between July 2018 and the beginning of October — ending right before the first-round election — we conducted an online study investigating what Brazilians thought about democracy. While our respondents are somewhat unrepresentative in social class (since the poorest Brazilians lack access to the Internet), they are representative by region and gender.

We found that people who planned to vote for Bolsonaro in the first round were very different from those who voted for other candidates. They were somewhat less supportive of the notion of democracy in the abstract than Haddad voters. But more alarmingly, there were very big differences between the two camps in support for the Brazilian armed forces.

Support for democracy is somewhat lower among Bolsonaro voters

Levels of support for democracy have been in decline in Latin America as a whole since 2014, and Brazil is not immune to this trend. Years of economic, security, and political crises have shown Brazilians that democracy is functioning poorly in their country. Yet regardless of their first-round vote, most Brazilians seem to support democracy as the best system of government, which is in keeping with high turnout numbers and widespread peaceful protests in recent months.

The enthusiasm that spilled into the streets Sunday night signals the military’s bond with the soon-to-be commander in chief. Our data show that Brazilians’ attitudes toward the armed forces played an outsized role in this election. As seen in the figure below, under 40 percent of Brazilians who planned to vote for Haddad or Gomes in the first round trusted the military. The percentage nearly doubled among Bolsonaro supporters, at 73 percent.

In a country where a military junta held power from 1964 to 1985, this is a big deal. While the military regime left power in the midst of an economic crisis, many Brazilians still view it positively. This is somewhat unusual in Latin America. In neighboring Argentina, for example, the military regime’s poor performance and human rights abuses delegitimized the institution for generations.

More alarmingly, Bolsonaro is a former military officer who was trained during the most repressive years of the military dictatorship. He launched his political career in 1988 after failing in a plot to detonate a series of small bombs on a military base in protest against perceived underpayment by the new civilian leadership. Recently, Bolsonaro has voiced support for military intervention in politics and has argued that the former military regime “didn’t go far enough” in eradicating leftists.

It goes without saying that military intervention and liberal democracy don’t go together. In the abstract, Bolsonaro voters are just somewhat less supportive of democracy than those who voted for his opponent. But the more pernicious force in the coming months and years might be the extent to which government supporters view military intervention as a solution to Brazil’s economic and security problems. While Bolsonaro’s rise has fueled comparisons to reemerging far-right nationalism in the United States and Europe, his advocacy for the military represents a different, and perhaps more dangerous, wrinkle in this global trend.

Why the very richest Americans are refusing to take sides in the presidential race
The decade, explained
A libertarian group is suing California for allegedly discriminating against men
The rise of Succession, TV’s new must-watch show
The litmus test for a Supreme Court nominee
Ilhan Omar, a progressive Muslim woman, wins Minnesota primary for Keith Ellison’s House seat