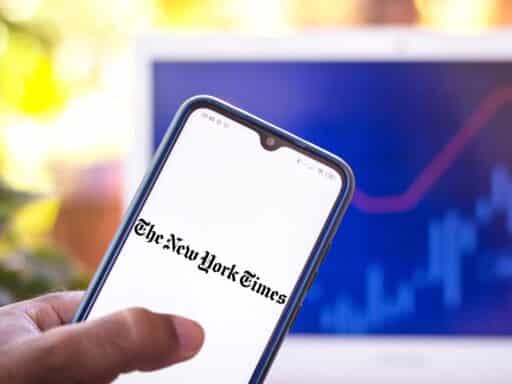 An editor for the New York Times tweeted that she had “chills” watching Joe Biden’s plane land.

Some 36 hours and a concerted campaign against the tweet later, Wolfe was no longer working for the paper of record. Her friends and several other journalists allege that this is because of said tweet.

Other members of the media have come to Wolfe’s defense, saying that this could open a door for journalists to be targeted with the threat of unemployment based on perceived or overblown offenses.

The Times disputes the narrative around Wolfe’s employment, saying in a statement that the paper didn’t “end someone’s employment over a single tweet.”

Lauren Wolfe, who was an editor on contract for the NYT, has had her contract canceled after she tweeted what’s on the left.

Wolfe also tweeted what’s on the right, but deleted when she learned Biden chose to take his own plane.

Whatever happened between the paper and Wolfe, the response to her social media post has become the latest flashpoint in an ongoing conversation about how media organizations apply ethical and objectivity standards, and how they should respond to attacks on reporters in a post-Trump era.

That question was pertinent during the administration of former-President Donald Trump, of course. He regularly sowed mistrust in credible media sources, referring to the press as “the enemy of the people,” and directed vitriol from his supporters at journalists covering his rallies and other events.

But even with him out of office, his loyal base remains intent on making known their dissatisfaction with perceived liberal bias in the media, and prominent news organizations are left having to respond to well-orchestrated targeting of the press.

The fallout also points to the lack of labor protections facing many American workers, including those in so-called prestige fields like journalism, and has also led some to point out disparities between Wolfe’s alleged circumstances and how the Times has responded to other reporters in their employ who have been accused of wrongdoing.

Here’s what we know: Wolfe is an award-winning journalist and editor whose work has largely focused on women’s rights and sexual violence. She had worked with organizations and outlets like the Committee to Protect Journalists and Foreign Policy.

In partnership with the nonprofit Women’s Media Center (WMC), she directed Women Under Siege, which documented and mapped instances of sexual violence during conflicts, including the Syrian civil war. A story of hers about war crimes in eastern Congo is credited with leading to the perpetrators’ arrests.

More recently, she was editing the Live section of the Times, primarily working with breaking news, according to the journalist Yashar Ali. However, a Times spokesperson told Vox that Wolfe was not working there full-time, and did not have a contract.

On Tuesday afternoon, the day before Biden’s inauguration, Wolfe tweeted out a photo of his airplane landing at Joint Base Andrews outside of Washington, DC. “I have chills,” she wrote. (She’s since deleted the tweet).

She also called the administration of former President Donald Trump “childish” for not sending a plane to bring in the new administration. According to Ali, she deleted that post after learning that Biden had chosen to use his own plane.

The journalist Glenn Greenwald, a prominent warrior against so-called “cancel culture,” responded by screenshotting and criticizing the sentiment.

If you’re in the national press and will be on TV at any point today and being to feel the need to weep joyously, just hold it in until you find a private place. Nobody is expecting any adversarial coverage over the next 4 years, but it’s just a matter of personal dignity. pic.twitter.com/FNKcFRPF56

Critics began flooding the Twittersphere with criticism of Wolfe and allegations of wider-spread anti-conservative bias among journalists.

Ali reported on Thursday, Jan. 21, that according to two unnamed sources, Wolfe had lost her work at the Times following a concerted campaign against both her and the Times.

In a statement, Times spokesperson Danielle Rhoades Ha disputed that version of events.

“There’s a lot of inaccurate information circulating on Twitter. For privacy reasons we don’t get into the details of personnel matters but we can say that we didn’t end someone’s employment over a single tweet. Out of respect for the individuals involved we don’t plan to comment further,” Rhoades Ha wrote.

She added that Wolfe was not, as Ali had written, on contract, but declined to respond to a follow-up query about the exact nature of Wolfe’s employment at the Times.

The online campaign against Wolfe also included severe harassment against Wolfe personally. On Twitter, Wolfe has shared examples of some of the online harassment she had received, much of which used obscene, misogynistic and homophobic language.

Wolfe did not respond to Vox’s requests for comment. She has not publicly commented on her separation from the Times. Throughout the day on Sunday, she retweeted other journalists’ messages of support, some of which say she was fired over the tweet, before shuttering her account. The account was offline as of Sunday afternoon.

In a lengthy tweet thread, Wolfe’s friend, Josh Shahryar, said that Wolfe has been stalked outside her home and received death threats. Shahryar also said that Wolfe’s sentiment had not been about Biden specifically, but rather about the successful transition of power just two weeks after a mob of Trump supporters had stormed the U.S Capitol in an attempt to halt the certification of the election.

But on Twitter, Wolfe also defended the Times, saying that people should not cancel their subscriptions in response to the incident:

Hi all. I truly appreciate everyone’s support but I need to ask you a favor: PLEASE don’t unsubscribe from @nytimes. I have loved this paper and its mission my whole life. Their journalism is some of the most important & best in the world, & they need to be read widely. Thank you

On Twitter, a #RehireLauren hashtag began trending, as other big names in journalism and elsewhere, including W. Kamau Bell, Alyssa Milano, and MSNBC’s Ali Velshi, came to Wolfe’s defense.

Felicia Sonmez, a national political reporter at the Washington Post who’s had her own brush with her paper’s management over tweets, said that capitulating to online campaigns against reporters would “put ALL journalists at risk.”

NYT should not have fired Lauren @Wolfe321, especially when other journos at the paper have done far worse recently and kept their jobs.

Knee-jerk firings in response to online harassment campaigns only further embolden harassers — and put ALL journalists at risk. https://t.co/GB6O1VMMQo

And Jeremy Scahill, Greenwald’s former colleague at the Intercept, pointed out that other journalists have publicly expressed personal reactions to political moments without incident:

I think it’s absurd and wrong that the NYT fired Lauren Wolfe. Also, does anyone remember how MSNBC’s Chris Matthews literally cried over an Obama speech, compared him to Jesus and said he “felt this thrill going up my leg” when Obama spoke? https://t.co/ZA6iZ6892t

It’s not clear what, exactly, happened between Wolfe and the Times, or why her employment ended. But it’s far from the first time a journalist (particularly a woman) has faced online harassment over a story or a tweet, and far from the last time a news outlet’s handling of it will be subject to scrutiny.

This incident has shined a spotlight on a question facing media companies as they transition from a White House that was openly antagonistic towards the press to one with a more traditional relationship with journalists. News outlets are sensitive to accusations that they will not hold the Biden administration as accountable as they did the Trump administration.

While Wolfe’s sentiment was relatively benign, some reporters covering Wednesday’s inauguration festivities did fawn over the incoming administration, heralding it as a supposed “return to normalcy.”

But targeting a journalist for apparent bias by challenging their employment has become a depressingly successful mob tactic, at a time when reporters face routine threats, both online and in real life.

The sociologist Katherine Cross, who studies online harassment, compared this strategy used to target Wolfe with harassment campaigns waged during the height of #GamerGate:

Wolfe, who was fired from the NYT for a tweet where she said she had “chills” after Biden landed in DC ahead of the inauguration, is the latest victim of a playbook perfected by the likes of GamerGate and similar harassment campaigns. https://t.co/cVP3psguiG

While we do not know the exact reasoning behind Wolfe’s loss of employment, this episode raises questions about the Times’ personnel decisions, and specifically whether it applies a uniform standard to all of its employees.

Just weeks ago, the newspaper weathered a significant crisis after its award-winning podcast, Caliphate, was found to contain substantial inaccuracies. The newspaper retracted the core of that show, and returned a Peabody Award that the show had won.

In spite of the fact that the main character of that show was discredited, the journalist behind the project, Rukmini Callimachi, remains at the newspaper, although she was reassigned.

Her partner on the project, producer Andy Mills, was not publicly disciplined for his part in that scandal. But Mills has been subject to numerous allegations of mistreating women, a fact that his former employers at the WNYC program Radiolab have acknowledged, but the Times has not.

Elsewhere in the Grey Lady newsroom, the reporter Glenn Thrush was suspended after Vox first reported allegations of predatory behavior towards young reporters. Although he no longer covers the White House, Thrush remains employed at the Times.

Moreover, while the exact nature of Wolfe’s relationship to the Times is unclear, the termination of it underscores the shaky system of labor protections facing most American workers — even those in prominent or prestigious positions. Shahryar, Wolfe’s friend, said that this loss of income will immediately harm Wolfe and her longtime pet, a rescue dog.

Wolfe has the benefit of famous friends and allies, and a story tied to a compelling and emotional public moment. While her friends have so far said they will not fundraise on her behalf, her Venmo account has been made public, and editors at other publications have publicly Tweeted at her with offers of work.

That kind of crowdsourced safety net is not available to most American workers, who also do not have much of a social safety net outside of their employment. And in a country governed by at-will employment laws, and in the midst of a pandemic that has seen tens of millions of Americans out of work, Wolfe’s predicament is taking place across the country – just outside of the public eye.