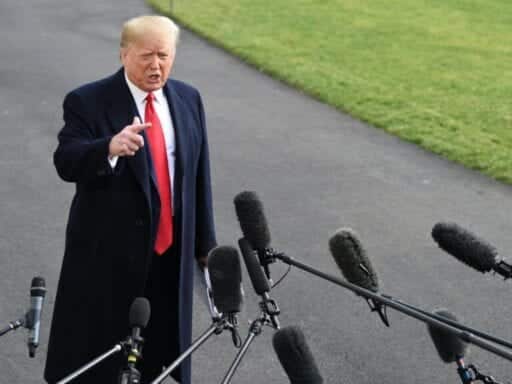 Share
Loading...
President Donald Trump speaks to members of the media on the South Lawn of the White House on November 20, 2019, in Washington, DC. | Chen Mengtong/China News Service/VCG via Getty Images

In the articles of impeachment introduced last week, Democrats deliberately avoided “bribery” and “obstruction of justice” charges and instead folded everything under the umbrella of “abuses of power.” The inclusion of bribery in the report is a new development, and one that raises a legal question: Did Trump’s actions meet the bribery threshold?

I put the questions to seven legal experts. Their responses, edited for clarity and length, are below.

There wasn’t a consensus, but most agreed that there is plenty of evidence for the bribery charge. However, it’s notoriously difficult to prove bribery since doing so involves establishing someone’s “intent.” In any case, because Democrats are framing the impeachment case around “abuses of power,” it’s not imperative that Trump’s actions actually violate federal bribery statutes. It’s enough to show that abuses occurred.

Paraphrasing a bit, the statute would require that President Trump “corruptly” asked for or obtained a thing of value for him personally (like dirt on a political opponent), that he asked for that in exchange for performing an official act (like releasing military aid). The most difficult thing to prove will likely be that President Trump acted corruptly.

However, in this case it appears that he did, it must be shown that he had the specific intent to get the information on Vice President Biden and his family (the thing of value) in exchange for the official act. This is the quid pro quo we hear so much about.

The House Judiciary presents a solid case that Trump’s conduct constituted bribery. I would add two observations: Many people were puzzled by why the first article of impeachment was titled “Abuse of Power,” and not “Bribery,” did not cite the federal bribery statute, and did not allege bribery explicitly, even as the article deliberately laid out each element of federal bribery.

And yet this committee report spends six pages (p. 120-126) going step by step through the bribery statute: an exchange of a “thing of value” for “an official act” for “corrupt” purposes. As the “thing of value,” The report wisely highlights that Trump was seeking merely “announcement” of an investigation into the Bidens, because it shows Trump was not sincerely interested in a real investigation, and an announcement would usually be counterproductive for starting a background investigation under the radar, to prevent tipping off witnesses to start coordinating their stories.

So why not spell out this felony in the article of impeachment? The House Judiciary Committee was making a crucial point now and as a clear precedent for future federal officials: high crimes and misdemeanors do not require a statutory felony. They are more fundamentally about the officer’s abuse of power. This argument notably can cut the other way. If a president cheated on his or her taxes many years before taking office, that would be a felony but probably not a “high crime or misdemeanor” in these terms of “abuse of power.” He or she may have used his office to cover up these crimes, but that abuse would be the impeachment trigger, not the past crime.

The report quotes the conclusion from our historical study (with Andrew Kent and Ethan Leib) of “faithful execution”: The Constitution’s “faithful” language imposes a duty on Presidents “to exercise their power only when it is motivated in the public interest rather than in their private self-interest.” There are many ways for presidents to self-deal and betray the public interest without committing a felony. The Judiciary Committee wisely made this point in the articles and in its reports, while also bolstering its case with a thorough explanation of several felonies including bribery, too.

Of course Trump committed bribery, which, as the report correctly concludes, encompasses the corrupt solicitation of something of personal value to influence an official act.

What Trump sought in exchange for a visit to the oval office and release of funds for Ukrainian defense was an official statement from Ukraine announcing an investigation of Joe Biden and Hunter Biden. That solicitation was “corrupt” for several reasons, one of which is that it contemplated foreign involvement in our elections.

Even so, as the House Judiciary Committee report outlines, it appears that the president has also committed federal crimes. Bribery under Title 18, Section 201 of the U.S. Code occurs when a public official corruptly demands anything of personal value in exchange for an official act.

The White House’s own record of the conversation with President Zelensky contains the “ask.” As several fact witnesses confirmed, the president sought the “favor” of the announcement of investigations into a political rival. And campaign benefits count as “things of value” within the meaning of the statute. In exchange, the president agreed to perform the “official act” of releasing the aid appropriated by Congress. Because the president was pursuing his personal interests and had no public justification for withholding the aid, he did these things “corruptly” within the meaning of the statute.

I think the case for characterizing Trump’s actions as bribery is fairly weak, and the Judiciary Committee was probably wise to frame the first article of impeachment around the much more appropriate charge of abuse of power rather than inviting an argument over the applicability of the details of the criminal code regarding bribery.

It is perfectly reasonable to think that the president abused the powers of his office by withholding congressionally appropriated military aid from a foreign ally in an attempt to extract from that ally an act that would solely serve the electoral interests of the president. Such an action would be an improper use of public power for the sole purpose of benefiting the president’s private interests and without regard to the national interest, and it would reflect the kind of corrupt behavior of an incumbent government official that the constitutional framers feared would undermine the effectiveness of electoral checks on government power.

Trying to squeeze something like a public announcement by the Ukrainian president into the terms of the federal bribery statute seems like an unnecessary and dangerous effort to criminalize a host of fairly ordinary political activities. One can corruptly abuse power without giving or receiving bribes.

The Judiciary Committee report does a serious and thoughtful job of alleging bribery. Two points. First, to be guilty of bribery the president’s actions must satisfy the requirement that he acted with a “corrupt” motive, which the report seeks to prove. Of course, in actual federal trials, this would an issue for the fact-finder — typically a jury — to decide.

In the impeachment trial, the senators are the jurors. It should come as no surprise that we can expect their “fact-finding” as to the president’s motives will likely synchronize with their political affiliation. But, certainly a reasonable, open-minded juror could find such corrupt motive.

Under the US Constitution, the House’s impeachment power reaches more than mere criminal activity. As the House Judiciary report states on page 61: “The Framers were not fools. They authorized impeachment for a reason, and that reason would have been gutted if impeachment were limited to crimes.”

However, Article II, Section 4 of the Constitution says: “The President, Vice President and all civil Officers of the United States, shall be removed from Office on Impeachment for, and Conviction of, Treason, Bribery, or other High crimes and Misdemeanors.” Thus, the plain text of the Constitution is crystal clear that bribery is a proper ground for impeaching a president.

So has President Trump committed bribery? Typically bribery boils down to the exchange of a public good for private gain. Set aside all of the potentially unconstitutional emoluments flowing from foreign governments through the Trump Organization and into the president’s pocket, which could also be considered bribes.

The House’s impeachment inquiry is more narrowly focused on President Trump’s actions vis-à-vis the president of Ukraine. When President Trump froze $391 million in military aid to Ukraine that was a public good paid for by my and your tax dollars, and moreover, putting a hold on that aid by the president was an official act. And then what President Trump asked for in exchange during the July 25, 2019 phone call with President Zelensky was “a favor” of Ukraine investigating the Bidens. That “favor” is quite arguably only for Trump’s personal gain — e.g. the injury of a likely political opponent in the 2020 election.

House Republicans release their impeachment inquiry witness wish list
What a second Trump term could mean for LGBTQ people
Would a female candidate be treated like Pete Buttigieg? Amy Klobuchar sees a double standard.
It’s all up to Trump now
How Lana Del Rey’s career explains a huge shift in the way we think about pop stars
Odd Job: the professional gift wrapper who’s having a “really lucrative” holiday season