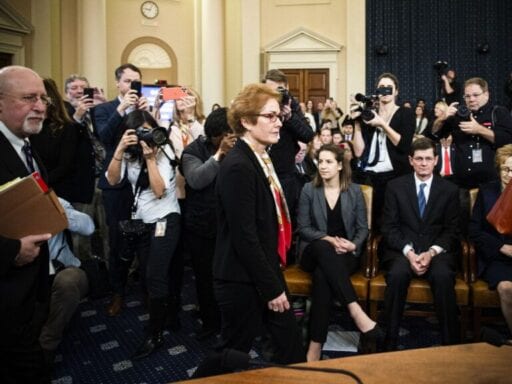 Probably not, but here’s why it likely doesn’t matter anyway.

When Marie Yovanovitch, the former ambassador to Ukraine, testified on Capitol Hill Friday morning during the second day of impeachment hearings against President Donald Trump, it didn’t take the president long to send a tweet attacking her.

“Everywhere Marie Yovanovitch went turned bad,” Trump wrote. “She started off in Somalia, how did that go? Then fast forward to Ukraine, where the new Ukrainian President spoke unfavorably about her in my second phone call with him. it is a U.S. President’s absolute right to appoint ambassadors.”

Yovanovitch was ousted from her ambassadorship back in April after she apparently got in the way of Trump’s efforts to persuade the government of Ukraine to investigate Joe Biden.

Her testimony on Friday was clear, calm, and mostly unflattering to the Trump administration. “As Foreign Service professionals are being denigrated and undermined,” she told members of Congress, “the institution is also being degraded. This will soon cause real harm, if it hasn’t already.”

Trump has a habit of blasting critics on Twitter. But some observers — including some loyal to the president — said this tweet was, at best, a very bad idea.

But did this tweet really cross a legal line into witness tampering?

I put this question to seven legal experts. Their responses, edited for clarity and length, are below.

There wasn’t a perfect consensus, but most experts agreed that Trump’s tweet falls pretty clearly within our understanding of an impeachable offense. As to whether or not it constitutes a crime, the question is almost irrelevant since prosecution is all but impossible.

According to the Department of Justice, intimidation of witnesses testifying before Congress is a crime under 18 U.S.C. § 1515(a)(1). However, in this case it is the president who is allegedly doing the witness intimidation and an OLC opinion (see Indicting a President Is Not Foreclosed: The Complex History – Lawfare) states that a sitting president cannot be indicted.

To be guilty, Trump would need to actually intimidate the witness from testifying, which he didn’t, and it would have to be proven that it was his intention to intimidate. He could easily argue that he is just informing us of how bad the witness was at her job or he even could say, “you know I bad mouth people, witness or no witness. That’s just my ugly habit.”

Trump’s tweet is a stone cold thug move. Let’s say I am federal prosecutor investigating a mob boss. A witness testifies that she felt intimidated by the mob boss. As she speaks, the mob boss denigrates the witness in a tweet.

I would halt the proceeding — for the safety of the witness — and ask the judge for a warrant for the arrest of the mob boss. The United States Criminal Code makes witness intimidation a felony. The fact that a mob boss lives in the White House should not excuse him from being brought to justice.

Impeachment is a legal process, in that the US Constitution provides for charging of “high crimes or misdemeanors” by the House, followed by trial in the Senate. Impeachment is not a federal criminal proceeding, however.

For this reason, evaluation of the president’s statements — in tweets, in phone conversations, at press gaggles, and the like — should turn not on whether the precise elements of a federal crime like witness tampering have been met, but rather on whether the statements constitute, or contribute to, abuses of the public trust that justify the president’s impeachment and removal from office.

If Trump were a criminal defendant charged with witness tampering, I assume his defenses would be: (1) he couldn’t have been intimidating Ambassador Yovanovitch because she was already testifying, and (2) his tweets were not directed specifically at any other witness.

Because I am not a criminal law expert, I do not know if (2) would or would not be a legally cognizable defense. (If a mob boss tweets, “Bad things are gonna happen to anyone who testifies about my kid,” I don’t know if it’s a defense that he would not have explicitly targeted a specific witness.)

Putting that aside, however, it must be said for the gazillionth time that impeachment is not a criminal process. For the president of the United States to seek to interfere by intimidation with testimony before a congressional hearing plainly falls within Alexander Hamilton’s understanding of an impeachable offense: “an abuse or violation of some public trust” that amounts to an injury “done immediately to the society itself.”

In Federalist No. 66, Alexander Hamilton envisioned impeachment as a political process run by Congress. That means Congress can impeach a president even if the executive actions at issue are not literally crimes but are abuses of power, as in the presidential phone call that triggered the Ukraine impeachment inquiry.

But Hamilton and the rest of the framers knew that politics is sometimes unfair; with the rise of political parties early in the Republic, all of the major players during the founding era were subject to scurrilous charges on a daily basis. For example, supporters of Jefferson attacked President Washington as a supposed lackey of Hamilton and Hamilton as an agent of Great Britain. Washington wisely didn’t see fit to respond to these allegations himself, but criticizing his accusers would not have been witness tampering, even if Washington’s opponents had sought to impeach him (as they came close to doing with Washington’s successor, John Adams).

The “abuse of power” theory of impeachable offenses allows the President and his supporters the right of reply in the political realm. Criticism of a witness’s past is part of that political process. It may show that the president doesn’t “get it” and will continue to abuse his power, making impeachment all the more imperative. But it’s not witness tampering.

High crimes and misdemeanors are not limited to felonies. In its articles of impeachment, the House should add Trump’s repeated practice of witness intimidation over three years as an abuse of power and as high misdemeanors. In context, this behavior is clearly impeachable.

But many legal commentators argued explicitly that Trump’s tweets this morning were crimes of witness intimidation, tampering, and obstruction, and I think that’s a mistake. Such an interpretation runs the risk of creating a slippery slope to infringe on the free speech of potential defendants to criticize witnesses and make public their own defense. They run the risk of communicating an overly aggressive scorched-earth approach to criminal law by Trump’s critics, who have no shortage of stronger legal arguments.

The content of the tweets were not threats. One statement that commentators focus on is the following: “They call it ‘serving at the pleasure of the President.’” They suggest it’s a threat to fire a current employee. But in context, it was an explanation for his power to have removed her earlier. There is a valid question about whether a boss needs to be more careful than even a remote implication about firing in retaliation, but a fair reading of context suggests this didn’t cross that line.

Jim Carrey returns to TV on Showtime’s Kidding. It’s a messy triumph.
LaCroix sparkling water CEO accused of “unwanted touching” by 2 male pilots
Hate crime or hoax? The drama behind the Jussie Smollett case, explained
Bernie Sanders’s campaign is over, but his legacy is winning
Walmart+ will finally launch in September. Can it compete with Amazon Prime?
The UK’s Brexit crisis, explained in 500 words