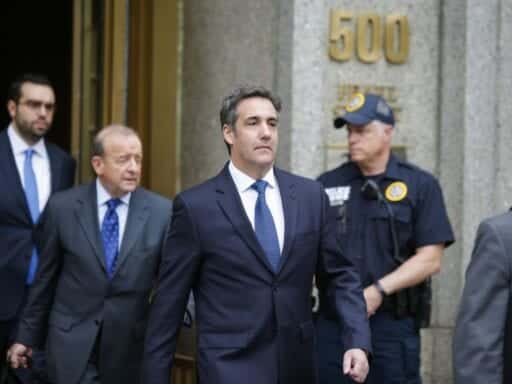 Newly appointed Donald Trump lawyer Rudy Giuliani dropped a bombshell on Wednesday night when he said on Fox News that Trump had repaid his attorney Michael Cohen for $130,000 in Stormy Daniels hush money.

Even Sean Hannity, who was interviewing Giuliani, seemed surprised by the admission. It was a shocking moment because it contradicted Trump’s previous claim that he didn’t know anything about Cohen’s payment.

Before last night’s revelation, the big question was whether the Daniels payment was technically campaign-related, or if it was merely personal. If it’s the former, Trump is in trouble. And if the payment was made without Trump’s knowledge, then he would be off the hook.

But now we know, thanks to Giuliani, that Trump did know about it — and Trump later confirmed Giuliani’s account on Twitter.

So what does the legal picture look like for Trump now? To find out, I reached out to 11 legal experts. Their responses, edited for clarity, are below.

Giuliani has made things much worse for Trump. First, he’s confirmed that Trump repaid the money, meaning Cohen potentially made an unreported loan to the campaign. If this was campaign-related, and Trump failed to report the loan and the repayments of the loan, that is a campaign finance violation. And willful violations can lead to criminal liability. Much turns on Trump’s motive. On Fox News, Giuliani suggested Trump’s motivation was indeed campaign-related.

Rudy Giuliani’s recent comments in interviews seem both unhinged and unhelpful. And in typical fashion, the Trump team appears to be doubling down on his claims in the aftermath. At a minimum, Giuliani has flatly contradicted the president’s earlier statements and exposed his arrangement with Cohen.

More dangerously, the awkward theory of “reimbursement” via retainer fees over time does not solve the problem of an illegal campaign contribution in 2016.

It’s easy to argue that when Michael Cohen used $130,000 of his own money to pay Stormy Daniels not to reveal her affair with then-candidate Trump, that payment was made for a campaign purpose.

The reasoning is fairly straightforward: The payment was made to help Trump’s campaign because if Daniels revealed the affair, that would hurt the campaign. So Giuliani’s argument that Trump reimbursed Cohen doesn’t hold up if the payment was still, ultimately, designed to help the campaign.

This argument is bolstered by the possibility that the Trump campaign is paying Michael Cohen’s legal fees because the payment Cohen made to Daniels was related to the campaign.

So if the payment was indeed made for a campaign purpose, then it is a loan to the campaign, and that is something which must be disclosed and reported to the Federal Election Commission. President Trump would also need to disclose and report the repayment. Failure to report such a loan could be considered to be a false statement.

Also, if Trump was repaying Cohen in increments of less than $10,000 to avoid reporting to the Treasury Department, this could be a violation of federal banking laws. It’s called “illegal structuring,” and it’s the same crime that Dennis Hastert was convicted of in 2016.

Giuliani was not going off script. This was a deliberate strategy by Trump and his lawyers, now that they know Mueller and the Southern District of New York have the financial records and that Cohen is probably going to flip — to admit and spin. The problem is that these admissions open up even more legal trouble.

Before last night, Trump’s official story isolated Cohen for campaign finance and bank fraud felonies. Now, Trump is on the hook for failing to disclose campaign donations and debts and for conspiring to evade detection with deliberately small reimbursements, as Giuliani said, “funneled through a law firm.” That’s the language a prosecutor, not a defense attorney, would use to explain illegal activity.

One overlooked point: Giuliani also strengthened the case for obstruction of justice when Trump fired [FBI Director James] Comey. The official reason was based on Comey’s handling of Clinton’s email. Of course, Trump already told [NBC News anchor] Lester Holt and Russian diplomats that the real reason was the Russia investigation.

We know Trump told Comey to “let go” of [Michael] Flynn while admitting that he knew Flynn had lied to the FBI. But Giuliani further confirmed this corrupt purpose when he said on Fox News that Trump “fired Comey because Comey would not say that he wasn’t a target of the investigation. He’s entitled to that. Hillary Clinton got that. And he couldn’t get that. So he fired him. And then he said, ‘I’m free of this, guys.’” This is one more piece of evidence of “corrupt intent,” the mental state required by federal obstruction statutes.

Giuliani’s comments appear to be part of a strategy to help Michael Cohen, who is under investigation for campaign finance violations relating to the Stormy Daniels payment.

Giuliani’s statements open Trump up to new liability for campaign finance violations and potentially for submitting a false financial disclosure form. Giuliani and Trump are betting that the public won’t care, and Congress won’t impeach for these potential violations, while Cohen remains in the fold. All of this begs the question: What does Michael Cohen know? He must know something important to warrant this kind of exposure from Giuliani and Trump.

The $130,000 payment to Stormy could violate campaign finance laws in a number of ways. If the donation is deemed to be a contribution to the candidacy of Mr. Trump, then it is way too big. At most, Mr. Cohen could give $2,700 to Mr. Trump’s campaign for the general election. It also appears to be an unreported contribution, which is another violation.

There is no serious criminal case against Trump for a campaign finance violation relating to the Daniels payoff. It would, at most, be a technical violation that no sane prosecutor would base criminal charges on (assuming that such charges could be brought against the president).

Although I have zero sympathy for Trump, I am puzzled by the CNN and MSNBC pundits’ apparent unanimity that Giuliani’s statement that Trump reimbursed Cohen was an admission that Trump lied, when he previously said he had not known of the Daniels payoff. There is no necessary contradiction here.

Trump’s story now is that he knew nothing about the payoff when it occurred, but since it was made on his behalf by his lawyer, he felt obliged to reimburse Cohen for the payment. If in fact Trump reimbursed Cohen, that could only have been hidden for a short time before becoming undeniable. I don’t believe that Giuliani did Trump any serious harm in revealing the reimbursement.

Giuliani seemed to enjoy his chats with Fox News on Wednesday evening and Thursday morning. Even apart from the unseemly spectacle of watching your lawyer speculate about the state of your marriage on national television, no client would want his or her lawyer to highlight even more questions relating to more money from unidentified sources, thereby fueling even more speculation about a payment made shortly before election day.

What did Giuliani mean by his reference to money having been “funneled” through a law firm? Why were reimbursements made in $35,000 increments over time?

Giuliani told American voters that $130,000 was such a small, insignificant sum that his client could have paid it from his own funds at any time. So why didn’t he do so? There was, apparently, far more money than $130,000 involved, perhaps an amount approaching $500,000. Where did this come from? What was it used for? What path did it take?

All of this creates new interest in previous suggestions of a fund used to deal with unfortunate behavior by Trump. The only thing Giuliani’s narrative lacked was an express reference to one or more exempt entities providing nondisclosure and a tax deduction.

Perhaps if we stay tuned, Giuliani will tell us about this as well.

The importance of Giuliani’s admission of repayment is that it indicates Trump and his campaign had knowledge of Cohen’s hush payment on Trump’s behalf. Cohen’s hush payment, for purposes of campaign finance law, might have been a contribution to the Trump campaign even if it were a loan.

The Trump campaign would have been required to disclose such a contribution. Giuliani’s admission therefore suggests that Trump and his campaign willfully failed to disclose it, which could trigger criminal liability under campaign finance law. Having said all that, the case against Trump for willful failure to disclose is still not a complete slam-dunk.

The circumstances and context here are suspicious, but it is not entirely clear that Cohen’s hush payment in fact constitutes a campaign finance contribution. Cohen and Giuliani seem still to maintain that the hush payment was purely personal, not campaign-related, which remains a gray area in campaign finance law.

Giuliani’s admission, though, concedes that Cohen did not act on his own and acted with Trump’s understanding. This not only contradicts Trump’s earlier positions but also opens the door wider for suspicions about obstruction of justice and use of Trump Organization resources in facilitating these transactions, among other things.

Giuliani’s comments are obviously inconsistent with what has come before. If the history of this presidency is a guide, then the latest rendition will last only a few news cycles before it too is clarified into some new version. All this is exhausting, dispiriting, and bizarre. But it is not illegal. Presidential confabulation may offend or not, but it is not constrained by law as such.

Now that we know President Trump authorized the payment during the campaign period, legal questions do emerge, despite all the “nothing to see here” pronouncements. There are many reasons to suspect that the finances and persona of Trump the individual and Trump the candidate were intertwined, just as the separation between the executive branch and the Trump administration has been anything but airtight.

An expenditure of this size at the heart of the campaign raises immediate questions of where the money came from and how it got paid. Legally, it makes a difference if it came from Trump himself, or from some private fund of contributions from friends. It makes a difference if the payment through Cohen was funneled through the campaign or privately.

Giuliani created some problems in acknowledging the money trail leads to Trump. “Follow the money” is always a useful guide. But whether this particular version of events is meaningful, or even around after a day or two, remains to be determined.

Last night’s revelation by Giuliani changes the political landscape much more than the legal one. The central legal question has not changed: When Michael Cohen wired $130,000 to Stephanie Clifford, was he trying to prevent Melania from learning about Clifford’s allegations or trying to prevent voters in Michigan from hearing these allegations?

Trump’s acknowledgment that he was personally involved in the payment may actually help his legal argument. I think the defense that this was about protecting Trump’s marriage would be very weak if Michael Cohen had acted alone. Why would Cohen care about Melania’s perception of Trump more than Trump himself? The Melania defense is much stronger now.

A new Amazon feature should make it easier to get a grocery delivery slot this winter
Gun laws were loosened in Texas the day after the state’s second mass shooting in a month
The big winner of the NATO summit? Putin.
Sri Lanka suffered from decades of violence before the Easter Sunday bombings
No, Biden did not call Black people “superpredators”
Vox Sentences: This newsletter is not a draft, a mistake, or unsigned