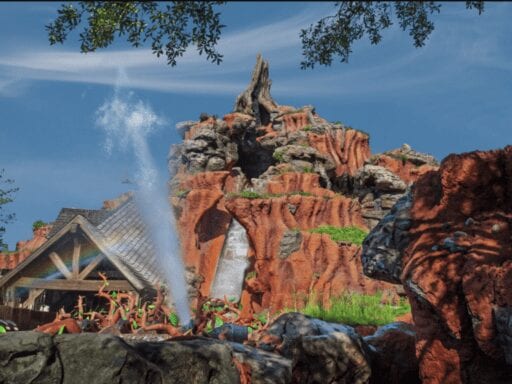 The popular log flume attraction will be redesigned around the 2009 film The Princess and the Frog.

Disney’s Splash Mountain ride, the famous log flume that’s popular at both the Disneyland and Disney World theme parks, is getting a facelift. And not just any ol’ facelift, but a major one that will finally scrub Splash Mountain of its ties to Walt Disney’s infamously insensitive 1946 film Song of the South.

The Walt Disney Parks division announced Thursday that a project to “completely reimagine” Splash Mountain began last year, and that the ride’s new theme is inspired by Disney’s 2009 animated film The Princess and the Frog. The film notably stars Disney’s first black princess, Tiana, who arrived 72 years after Snow White kicked off the Disney Princess canon. Disney did not reveal when Splash Mountain will relaunch with its new theme, or how long the ride will be closed during the retooling process, and has not responded to Vox’s request for comment.

Replacing Splash Mountain’s current look with the characters and setting of The Princess and the Frog feels like a pointed response to longstanding complaints over Splash Mountain’s association with Song of the South. Splash Mountain, which opened in 1989, features woodland creatures and stars the character Br’er Rabbit on his adventure to avoid the clutches of Br’er Fox and Br’er Bear. Visitors sit in log boats that move slowly through these scenes, until their journey culminates with the boats sliding down a steep waterfall, landing in a “briarpatch.”

Although it’s not obvious from looking at the ride, Splash Mountain borrows directly from Song of the South. The story of Br’er Rabbit is told in the film by the character of Uncle Remus, a black man who works on a plantation in the Reconstruction-era American South. Uncle Remus was a storybook character created in 1881 who told Aesop’s Fables-esque folk tales, intended by white author Joel Chandler Harris to convey the difficulties of Black life in the Deep South. But Harris’s characterization of Remus as speaking in stereotypical Black Southern vernacular has not stood the test of time, and Uncle Remus is now seen as an unquestionable example of racist entertainment.

When Song of the South was released in 1946, the Uncle Remus character had largely been forgotten. The film told an original story based on some of Harris’s Uncle Remus stories, bringing the character into a wider public consciousness. Walt Disney made few changes to Uncle Remus himself, preserving the character’s deference to the white plantation owners for whom he worked and their families, as well as his use of stereotypical Black Southern vernacular.

Despite criticisms from black writers hired to consult on the screenplay’s racial sensitivity — setting benchmarks the movie largely failed — Song of the South received positive reviews and performed well at the box office. It even went on to win the 1948 Oscar for Best Original Song, for “Zip-a-Dee-Doo-Dah.” But Hollywood in 1940s was still heavily segregated, as was the rest of the pre-civil rights era United States, and Black anti-racism activists critiqued the film after its release as helping “to perpetuate a dangerously glorified picture of slavery.”

Disney disowned Song of the South decades ago, but it has lived on through Splash Mountain

Disney rereleased Song of the South in theaters multiple times in the years after its release, as it did with many of its popular movies throughout the mid- to late 20th century. Song of the South’s last public theatrical screening was for its 40th anniversary in 1986 — three years after production had started on Splash Mountain, a ride inspired by the film. Back in 1983, Disneyland theme park ride designers (known as Imagineers) had been asked to come up with a log flume ride; Song of the South came to mind, and the Imagineers centered the different animal characters from Uncle Remus’s tales in its design. (This history is discussed in the excellent podcast You Must Remember This, which devoted an entire episode to how Song of the South influenced Splash Mountain.)

But after Song of the South’s 1986 theatrical run, then-Disney CEO Michael Eisner said that the company would shove the film into its so-called vault, due to its dated racist stereotypes. But the still-in-progress Splash Mountain did retain its Song of the South elements, including its animal characters and the use of two songs from the film: “Everybody’s Got a Laughing Place” and the classic “Zip-a-Dee-Doo-Dah.”

Song of the South has never been released on home video, and by the time Splash Mountain opened in 1989, Disney had effectively disowned the film. But since the link between Splash Mountain and Song of the Sign remained, critics have often called out Splash Mountain for its connection to the film over the years, including as recently as earlier this month — a petition began circulating online in mid-June that demanded Disney redesign the ride. As Black Lives Matter protests, campaigns, and awareness ramp up nationwide, many companies have been forced to deal with their histories of racism. For Disney Parks, that includes the origins of Splash Mountain.

Disney said as much in announcing that the ride will be reworked, albeit in much more ambiguous terms.

“With [Disney Parks’] longstanding history of updating attractions and adding new magic, the retheming of Splash Mountain is of particular importance today,” reads the announcement. “The new concept is inclusive — one that all of our guests can connect with and be inspired by, and it speaks to the diversity of the millions of people who visit our parks each year.”

Neither Disneyland nor Disney World has reopened since the coronavirus pandemic forced both parks to close in March. Maybe that makes now the perfect time for renovation work to begin righting Splash Mountain’s course.