Disneyland is closing amid Covid-19 fears 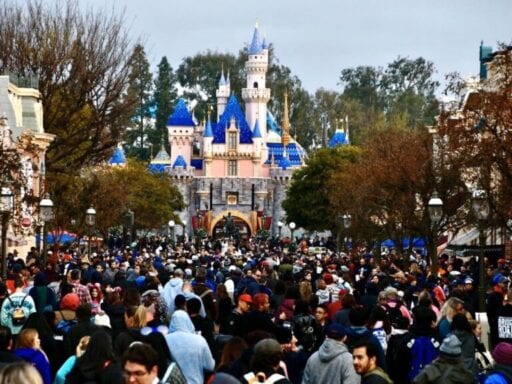 With more than half its theme park resorts closed, what comes next?

When a pandemic sweeps the globe, making large gatherings of people incredibly dangerous, how does the Walt Disney Company respond? At first, with copious amounts of Purell, but as of March 12, the operators of the world’s largest theme parks announced that California’s Disneyland would close on March 14 for only the fourth time since it opened in 1955.

Earlier in the day, California Gov. Gavin Newsom announced that Disneyland was exempt from a general order limiting groups of 250 or more people, citing the situation as “complex” and “unique.” However, by early afternoon, the company issued a statement saying:

While there have been no reported cases of COVID-19 at Disneyland Resort, after carefully reviewing the guidelines of the Governor of California’s executive order and in the best interest of our guests and employees, we are proceeding with the closure of Disneyland Park and Disney California Adventure Park, beginning the morning of March 14 through the end of the month.

The company is currently making decisions on a park-by-park basis. Walt Disney World Resort in Florida says it is monitoring the situation closely but remains open to the public with enhanced safety precautions in place.

Disneyland is not by any means the first Disney theme park to close. The company closed Shanghai Disneyland and Hong Kong Disneyland in succession on January 25 and 26 to contain the spread of Covid-19, as the danger of the virus and the disease it causes quickly became clear, and both have remained closed since. However, Shanghai’s Disneytown, the outdoor mall attached to the park, began welcoming guests this week — 45 days into the closures — in what could be an optimistic sign. As “the first step of a phased reopening,” as reported by CNN, the mall is allowing guests to visit specific locations after undergoing temperature screenings, requiring them to wear masks throughout and present health records when entering a dining area. But, even as promotional videos of furry characters play on social media, the rides stand still.

When Japanese Prime Minister Abe Shinzo requested to postpone large gatherings for two weeks last month, Tokyo Disney Resort announced it would close temporarily starting February 29. This past Monday, March 9, the park extended that closure through early April — pushing the opening of its new Beauty and the Beast ride and Fantasyland expansion at least one month later than intended. Its hotels remain open but with limited services, as character dining with Mickey Mouse and gift shops remain closed and buffets have been amended to table-service dining.

Tokyo Disneyland and Tokyo DisneySea — a locale that many theme park aficionados consider the holy grail — closed for 34 and 47 days, respectively, following the 2011 Tōhoku tsunami and earthquake, a threshold that could be exceeded if the closure lasts past April 15. A new opening date has not yet been announced, but Universal Studios Japan, located a few hours away in Osaka, has extended through March 22 with the possibility of being pushed further, a far shorter window than Disney’s park.

Disneyland Paris, the most-visited location in France, also remains open, despite three employees having tested positive for coronavirus. The staff worked “backstage,” the company term for not guest-facing, and are confirmed not to have had contact with guests, according to the Financial Times.

Today, in an effort to enhance safety protocol, the Paris park announced a temporary suspension of parades and a large portion of its in-park entertainment through mid-April, and has limited capacity within lines, theaters, and larger indoor restaurants. Disneyland Paris has also apparently restricted face-to-face contact with Disney princesses, replacing them with Mickey and Minnie — whose faces are not exposed — at character meals and shuttering their meet-and-greet location in favor of a parade-style cavalcade, performed at a distance.

With the majority of Disney’s theme park portfolio on pause, it’s worth noting that domestic resorts like Disneyland and Walt Disney World are closer to home in ways less obvious, too. Hong Kong Disneyland Resort and Shanghai Disney Resort both serve as a joint venture between the Walt Disney Company and local government — which owns the majority share — while Tokyo Disney Resort is overseen by the Oriental Land Company, a Japanese business that owns and operates the resort. Disneyland and Walt Disney World, however, are singularly owned. (The Walt Disney Company also regained ownership of Disneyland Paris back in 2017.)

For a fantasy-filled destination whose brand is “the happiest place on earth” — open 365 days a year, come Floridian rain or humid shine, on all major holidays — theme park fans are watching and watching Walt Disney World to see what happens next.

Historically, Disney World and Disneyland have only closed for impending natural disasters or in the wake of a national tragedy (like 9/11 or JFK’s death); while other businesses may close up shop for Christmas and New Year’s Eve, here, it’s the busiest days of the year. (It’s worth noting that both of Disney’s Chinese theme parks closed days before Lunar New Year — which typically sees a boom in park attendance.)

The Florida theme park resort is still functioning normally, with standard safety precautions like increased cleaning of high-touch surfaces and recommended hand-washing procedures for safety and contamination amid the pandemic. The California park was open until March 12, using the same precautions. Antibacterial hand gel dispensers have been placed in key locations throughout Disney World, and earlier this week, the park added mobile hand-washing stations. (If that sounds too minimal, remember: The viral video of that kid licking a pole? It’s taken inside Magic Kingdom’s Tomorrowland.)

According to Travel Pulse, US Disney parks went as far as to add hand sanitizing and Covid-19 information locations to its virtual resort maps within the Disneyland and Walt Disney World apps — a prominent and worthwhile addition, given that both are used frequently throughout the day for entertainment schedules and FastPass ride return time reservations.

Disney Cruise Line — yes, the mouse has his own fleet — is still in service despite warnings from the Centers for Disease Control and Prevention, but with enhanced measures. No guest or crew member who has traveled from, to, or through China, South Korea, Iran, Italy, or Japan or has had contact with anyone from those regions, including connecting flights, are able to board.

All eyes are on the Magic Kingdom, a cultural beacon of our current state and predicament, as Florida reports more than 30 confirmed Covid-19 cases.

As preventive measures ramp up within the parks, crowds don’t seem to have taken too much of a downturn. According to guests of the Florida resort, and per attraction wait times, there are still plenty of people in the parks — likely a result of Disney’s new Star Wars attraction that requires a first-come, first-served “boarding pass” to ride, and its first Mickey Mouse ride, which opened just last week. The New York Times reported that Disney-affiliated companies had seen “business as usual,” with one park-goer saying, “If I’m going to get sick and die, I might as well do it at Disney World.”

That attitude seems to be changing, though. Even before Disneyland’s closure, Walt Disney World Resort and Disneyland resort began to offer temporary adjustments to package deals, waiving the $50 change fee for guests who have purchased theme park admission and a hotel room as a bundle. For Disney World guests, package bookings can be delayed to later in 2020, as the Orlando Sentinel reports cancellation fees will not be waived; individual Walt Disney World hotel booking guidelines and ticket policies remain intact.

For Disneyland guests, the company pledged in its statement to work with guests “who wish to change or cancel their visits, and will provide refunds to those who have hotel bookings during this closure period.” With travel increasingly discouraged, and more and more reactions and shutdowns from the entertainment industry, there could be further changes in the coming days.

Disney Parks are, after all, an escape, but the severity of the pandemic continues to grow.