Disruption has come for toilet paper 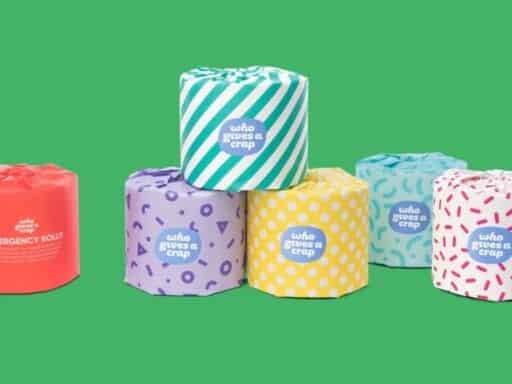 Share
Loading...
Who Gives a Crap? was one of the first DTC T.P. companies on the market. | Who Gives Crap?/ Sarah Lawrence for Vox

There’s a joke in Seinfeld where George Costanza thinks he’s come up with this amazing conversation starter: that toilet paper hasn’t changed appreciably in his lifetime. “It’s just paper on a cardboard roll,” he says. “And in 10,000 years, it will still be exactly the same. Because really, what else can they do?”

Over the past five years, a host of startups, searching for something, anything, to disrupt, have decided that toilet paper is ripe for change. (The older companies, like Charmin, are trying new things too, sort of. At least bigger things.) These new companies have names like Who Gives a Crap, Tushy, Cheeky Monkey, and No. 2. Their paper is design-forward, made of theoretically sustainable materials, and available in more modern ways — namely, a subscription-based web purchase, sold through a direct-to-consumer model. Toilet paper is sold the same way as millennial-focused makeup, reusable straws, and foam mattresses.

The push for new toilet paper became more intense with the release of a semi-viral report from the Natural Resources Defense Council (NRDC) in February 2019. That report, titled “The Issue With Tissue,” looked at several of the biggest-selling toilet paper brands, issuing them a sustainability scorecard. The NRDC’s report was designed to make people aware that toilet paper does in fact come from somewhere: usually, mature trees, cut down from Canadian forests. Some brands did okay, but major brands like Charmin, Quilted Northern, and Kirkland Signature all scored an F.

The new toilet paper revolution is one of those specifically odd 2019 things. It’s an industry full of copycats and irritating influence-entrepreneur speak, of cutesy videos and banana-leaf designs, of claims to sustainability that don’t always hold up to inspection. It’s born from people, sometimes lazy or opportunistic or gullible but generally trying to do the right thing. They are, on the whole, making an improvement. Mostly. Probably.

The big toilet paper companies — Procter & Gamble (Charmin), Kimberly Clark (Cottonelle, Scott), and Georgia-Pacific (Quilted Northern, Angel Soft) — use primarily, sometimes exclusively, freshly cut trees. Some of those come from the boreal forests of Canada, which are exceedingly old trees that, when cut, leave the forest bare and unable to recover, a major problem for the ecosystem there. The best, softest toilet paper comes from softwood trees like pine and spruce, which Canada has plenty of. It takes a tremendous amount of water and energy to process trees into toilet paper, along with a startling amount of bleach, formaldehyde, and various organochlorines to increase strength, softness, and color.

It’s probably worth stating here that a couple of people who work for these startup companies repeated an old thought to me — that toilet paper itself is an inferior tool for the task of wiping. “Would you clean your dishes with a piece of dry paper? Of course not,” say Jason Ojalvo, the CEO of Tushy. Many parts of the world don’t bother with toilet paper, opting for water solutions like the bidet instead.

The United States is the largest consumer of toilet paper in the world; Germany and the UK are close behind in per capita use. But toilet paper is not, if used properly, any less sanitary than a bidet. Poop is gross, but it’s not dangerous just sitting on your own skin. The only real danger, aside from somehow getting it in your mouth, is from the moisture content causing fungal infections, which toilet paper is very good at combating.

Toilet paper is generally bad in other ways: bad for the environment, bad for plumbing, bad for energy consumption

Anyway, toilet paper is generally bad in other ways: bad for the environment, bad for plumbing, bad for energy consumption. This is not new information, and products designed to be non-bad are not new. Seventh Generation has been making toilet paper from 100 percent recycled paper since the early 1990s, and has achieved wide success with it. But the aesthetics of Seventh Generation are stuck in the 1990s, relying on a boring green leaf and dull fonts.

The first of the new generation of toilet paper companies is Who Gives a Crap. Founded by mostly Australians, the company launched with an Indiegogo campaign in July 2012. But Who Gives a Crap is, at its core, an advocacy company. The co-founders had all worked in nonprofits before and founded the company explicitly as a means to gain enough profit to donate to sanitation infrastructure. They started with 100 percent recycled paper, like Seventh Generation, and eventually introduced a bamboo paper line.

Who Gives a Crap is a certified B corporation, which means it has to meet certain criteria of environmental sustainability, fair employment, and transparency. Who Gives donates half of its profits — about $1.7 million US so far — to a variety of organizations around the world. “We give unrestricted funding to organizations that we think are doing the highest-impact work,” says Danny Alexander, one of the company’s co-founders. Those organizations might dig pit latrines, install septic systems, or maintain clean and safe toilets, whatever’s needed in their area.

The company’s toilet paper is available online, via either subscription or à la carte purchases. It has pretty designs. The website is well designed. The company has essentially eliminated plastic from its supply chain. It’s slightly more expensive, with maybe a 5 or 10 percent premium over other toilet paper. Who Gives a Crap’s recycled paper currently costs $48 for 48 rolls of recycled paper, or $52 for the same number of bamboo rolls. Amazon’s best-selling toilet paper, a house brand called Presto, sells for about $45 for 48 rolls.

That model was swiftly copied, sometimes mutated. Tushy, which started out selling bidets, began selling bamboo toilet paper in early 2018. No. 2, which has been featured on Goop, launched in April 2019. Other companies crowded the space, some offering offensively masculine wipes, some selling paper made from sugarcane, some not doing anything particularly different at all. All of them tout their eco-friendly paper. None besides Who Gives a Crap bothered with that whole giving-away-half-your-profits thing.

Samira Far, who founded No. 2, was looking for a new idea in 2017. She had sold her last company — a chain of eight nail salons called Bellacures that were created to be cleaner and nicer than competing salons. “I guess I have a passion for seeking out areas of improvement in both products and services,” she says.

She landed on toilet paper, seeing it as “a very outdated industry,” and started looking into it. “Initially I looked at it as: The branding is super old, the packaging is super old, there’s a way to do this better so it’s cute for the bathroom,” she says. “But in my research I actually started to see that there’s actually a way to do it so it’s environmentally friendly and doesn’t have as many chemicals inside of the paper as it usually does.”

No. 2’s first priority is in its design and the quality of the product. The environmental stuff seems to have been a happy accident. “I’m not a 100 percent zero-waste-living kind of person. I try to be as eco-friendly as possible whenever the option is available, but I’m not, like, taking jars to the supermarket and filling them with beans and nuts,” Far says.

No. 2’s bamboo is certified by the Forest Stewardship Council, which, though really the only trustworthy option for assessing sustainable forestry, is pretty limited. “FSC’s standards are a floor, not a ceiling, for responsible forestry, and still need to undergo significant improvements before they can fully protect forests, species, and Indigenous rights,” says the NRDC. I asked Far a bit about where the bamboo is sourced from and what type of bamboo it is. “The bamboo plant, I don’t know that there are different species,” she said. (There are well over 1,000 species of bamboo.)

No. 2’s bamboo toilet paper is probably as ecologically responsible as any other bamboo toilet paper. But it’s not motivated by environmentalism; it feels more like a standard-issue startup that’s pleased things worked out in a greenish way. No. 2 is certainly not more egregious than anyone else; there’s a Silicon Valley vibe to most of the companies in this space. I just feel like someone at some point described it as “Uber for toilet paper,” and that grosses me out.

The new toilet paper companies sell, generally, three types of paper. There’s the 100 percent bamboo, like No. 2 and Tushy sell. Some companies, like Pure Planet Club, sell toilet paper made from a mixture of bamboo and sugarcane fibers. (Sugarcane fibers are left over after the cane is squeezed for its juice in the process of making sugar.) Who Gives a Crap started with, and still mostly relies on sales from, its 100 percent recycled toilet paper. Recycled paper is by far the best option from an environmental standpoint, requiring much less energy especially in transportation needs.

But bamboo is a fascinating alternative. It’s a grass, grows incredibly quickly, requires little water and no pesticides, and can be chopped down multiple times — it’ll just grow back. One problem is that the only sizable bamboo producers are in China, where environmental and labor concerns are sometimes tossed aside. (This could change; bamboo grows just about anywhere.) That FSC certification becomes vital, and its limitations become a problem.

Switching away from your standard Charmin is good, objectively. Despite issues with bamboo production and processing, it’s still far and away a superior environmental option to cutting wild forests. The idea — from Seventh Generation to Who Gives a Crap to the countless copycats — is a basically sound one.

That doesn’t mean that the copycats aren’t annoying. “The companies who are taking our donation approach, and making sure they’re shifting people away from virgin paper and ideally donating some of their profits? I think that’s great, and if one of them succeeds and beats us, more power to them,” Alexander says. “It’s the companies that are copying our model and either not shifting people towards a more sustainable option or delivering an inferior sustainable option, those hurt us and hurt the whole movement, and those are the ones I really get frustrated with.”

Few companies are actually incorporating any donation elements. Better Planet plants trees, and the venerable Seventh Generation — the original in the space — donates 10 percent of its profits.

For Far, this is just another disruption enterprise. Copying is not really a concern; none of the companies that came before hers achieved massive success, so there’s still room in the market. “Of course anybody can do what I’m doing, but I think that branding is just like, no matter if somebody copies you, there’s just a different energy behind it, because who’s leading the brand has a specific voice, specific energy, a specific feel, and it either speaks to you or it doesn’t,” she says.

Like other well-intentioned disruptions, the new toilet paper makers are, probably, doing some good. On the one end of the scale is the possibility of actual, positive change. On the other end: consumerism, greenwashing, pandering millennial marketing. It feels impossible to avoid the joke, so here: The toilet paper industry is messy.

Which charities do the most good? Charity Navigator joins the effort to answer this crucial question...
What we learned from the BuzzFeed News report that Trump told Cohen to lie to Congress
In Dave Chappelle’s surprise new special, he drops the comedy to meditate on black America
What Justice Ginsburg’s death means for the future of abortion rights
The horrible celebrity biographies of Amazon are impossible to explain
How you can keep thousands of people from getting coronavirus, in one GIF