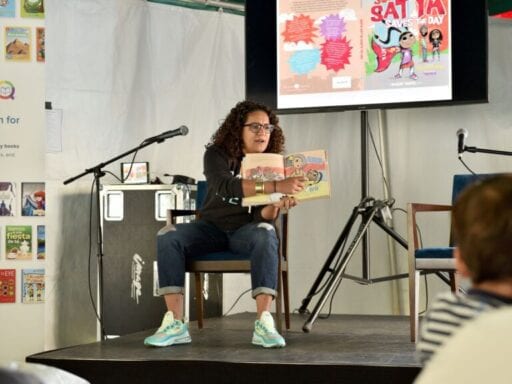 Welcome to Vox’s weekly book link roundup, a curated selection of the internet’s best writing on books and related subjects. Here’s the best the web has to offer for the week of December 22, 2019, and our last book link roundup of the decade.

Many authors mocked RWA for thinking they could get away with dropping this news during Christmas and having nobody notice.

Best-selling romance novelist Alisha Rai tweeted, “I’m sure RWA thought delivering this news right before the holidays would blunt its reach and it’s like SURPRISE BITCHES WE CAN BE MAD AND WRAP.”

For a group of minority authors and publishing insiders, it was high time to confront the unbearable whiteness of being. Using the hashtag #WeNeedDiverseBooks, they launched a social media campaign that led to the creation of a nonprofit organization dedicated to increasing the representation of minorities in young people’s books. Publishers and librarians expressed new resolve to feature books and authors that look more like America as a whole. Data released last month by the University of Wisconsin indicates a fourfold increase in the number of children’s books about black people and similar increases in the number of books by and about Latinos. #WeAreGettingThere.

Our culture’s sentimental attachment to stories of young women about to bloom is strong. Jo’s anger — at her own powerlessness, at her culture’s obsession with marriage, at others’ assumptions about what shape her life should take — is legible; Marmee’s is not. A subtext of “Little Women” is that the explosive potential of these four girls is not, and will not be, realized; this is why Marmee belongs at the heart of the story. Gerwig’s adaptation is too committed to the idea of Jo as a transformative feminist hero to plumb these depths. The story that Gerwig’s film wants us to own — the story that so many redemptive, individualist readings of the novel push us toward — is the one where there are survivors, singular women who somehow escape. I don’t think this was the story Alcott was telling.

Jo is angry, above all, because she gets the bitter tragedy of Little Women as no one else in the novel does. It tells a story about the bonds that knit together a family of women — of love nurtured with exquisite care — only to break up that family and transfer its bonds to an array of frankly disappointing men. (Even Mr. March’s return from the Civil War must be counted among these intrusions, although Alcott does her best to recover by more or less forgetting him.) Alone, Jo recognizes what Brian Connolly describes as the “erotic excess” that suffuses the nineteenth-century sentimental family as it devotes itself to the cultivation of love within the home circle. If they were “all boys, then there wouldn’t be any bother,” she observes; homosociality and endogamy would be on their side. But as girls, their love is manufactured only for export, to enrich the emotional lives of men.

The list is a mixed bag in terms of quality, which should come as no surprise at all: It’s a list of bestsellers, not the best novels, and therefore reflects what people actually buy and read, not what we think they should buy and read. But the story it tells is much more complex than one of women as victims. In fact, what stands out from this list is how active and complex the women in many of these novels are, in sharp contrast to the popular books of many previous decades.

Amazon has brick-and-mortar locations now, also, and they are a nightmare. I visited one with a frankly dystopian number of books and plenty of Hulk action figures for sale. Barnes & Noble did a lot wrong, and a lot of their best people have been paying the price, but I have the urge to protect what’s left of it now from the algorithmic freeze of what comes next. I’ve started to quietly root for them, and to like the booksellers I meet.

It’s like ‘Profiles in Thinking About Courage’ … It is not clear why, if Anonymous has concluded that the quiet resistance is powerless, the author remains in the administration … We don’t need a secret administration insider to tell us to pass the torch of liberty; we need that person to detail whether and how the torch is being doused … parlor game? Maybe. But without a clearer sense of who Anonymous is and what this person has seen, done and is still doing, A Warning does not cut through the noise. It just creates more of it.

As a genre, the detective story has often found popularity at moments of great social upheaval, as if it somehow helps to make overwhelming trauma more manageable. The wild popularity of Agatha Christie novels in England followed swiftly the deaths of hundreds of thousands of young British soldiers in the First World War. Detective Hercule Poirot, who first appears in a Christie novel in 1920, is a Belgian refugee from the war, arrived to the English countryside. Of her Tommy and Tuppence detective duo, introduced in her 1922 novel “The Secret Adversary,” the reader learns that Tuppence and Tommy both served in “the Great War” and that Tommy was injured. Christie herself famously disappeared — when her first husband was having an affair. She left the disappearance out of her autobiography, though at the time it was an international news story. Her husband attributed it to amnesia.

We need to talk about the fact that Trump seriously considered invading Venezuela
Teen Titans GO! to the Movies is a candy-colored cure for superhero-movie fatigue
Parasite absolutely deserved to win Best Picture. I didn’t think it could.
Andrew Yang recommends 3 books on why the economy is failing Americans — and how to fix it
These laws were meant to protect people from HIV. They’ve only increased stigma and abuse.
Social distancing can’t last forever. Here’s what should come next.