Do you burn more calories exercising in the cold? Here’s what the science says. 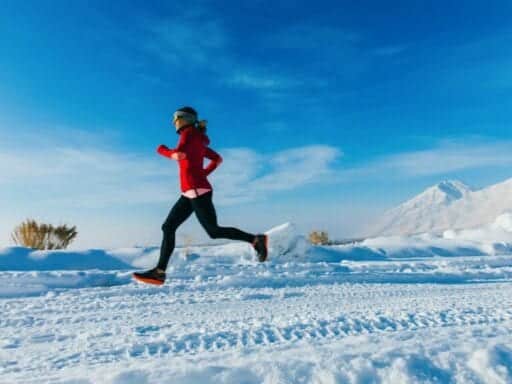 Share
Loading...
Exercising in the cold is refreshing — but it’s not going to burn off many extra calories. | Getty Images/RichVintage

Bodies do burn fuel to stay warm — but it’s complicated.

As the temperature drops this time of year, the rich, comfort foods of winter seem just right. But as we lay about, full from our heavy winter meals, we may also dream about how to quickly burn off those extra calories.

One idea that gets bandied about is that all you have to do is exercise outside in the cold. You can find it in magazines, newspapers, and maybe your email inbox — we once got a press release from the University at Albany titled, “Winter Exercise Burns More Calories, Especially for Women.”

It is true that a cold body uses more energy to keep itself warm than a warm body. But alas, exercising in the cold isn’t the fabulous calorie burner we may think it is. Before we get to why, let’s look at the reason this idea seems so intuitive and appealing.

First, a word about a process called thermogenesis. Your body creates heat when it’s cold (usually below 32 degrees Fahrenheit but in a person wearing light clothes, it can start at temperatures as high as 70).

One way is by shivering — where the muscles involuntary contract to generate warmth, and defend your body temperature (98.6 degrees Fahrenheit). Or you may begin to activate “brown fat,” the kind of fat tissue whose main function is heat production. Unlike white fat, which stores heat to keep you warm, brown fat burns calories to generate heat.

“The analogy might be a oil tanker that drives on the highway compared to a sports car,” explained Aaron Cypess, a metabolism and brown fat researcher at the National Institutes of Health. “They both have fuel, or fat, but the oil tanker stores it for use later, and that’s the white fat. The sports car stores fuel to burn it, and that’s the brown fat.” The process of breaking down these lipids to release heat, and warm you up is called “non-shivering thermogenesis.”

Both shivering and brown fat activity increase your energy expenditure, causing you to burn more calories in cold temperatures.

“You don’t even know its happening,” Herman Pontzer, an associate professor at Hunter College who studies energetics, told Vox in 2017 (when we first published this piece). “It’s below the radar of your conscious thought, but it’s there ticking away.”

Exercise can produce a lot of heat on its own

Now here’s the rub: These processes only kick in to keep you warm when you’re truly cold. But once you start exercising — running or cross-country skiing, for instance — outside, you’re going to start generating heat from the physical activity. And the exercise alone may give you enough heat that your body wouldn’t burn any extra calories through shivering and brown fat.

That’s why you can go running in very cold temperatures wearing a light sweater and pants, but if you were just sitting around outside in the same cold climate, you’d need to bundle up in a heavy jacket and hat, or you’d start to shiver, to stay warm, Pontzer explained.

“The best way to use the cold to burn more calories would be to not exercise while you’re outdoors,” Pontzer added. “You’d get your brown fat cooking and making heat, and might even start shivering, all of which burns calories.”

Now, it is possible to get those energy-burning heating processes going while exercising. Cypess imagined a scenario where a person is exercising in subzero temperatures, and wearing light enough clothes, that the exercise alone isn’t keeping him warm, and thermogenesis kicks in.

But even in that case, you’d only burn a few additional calories at best, Cypess said. In studies where he’s put participants in cold rooms for entire days, they burned off an additional 150 to 200 calories. Again, that’s a full day of cold — not an hour’s worth of outdoor activity.

Of course, the most important thing to remember if you’re trying to make up for heavy meals is that physical activity makes up a surprisingly small portion of your total energy burn.

There are three major components to how many calories you burn off in a day: 1) your basal metabolic rate, or the energy used for basic functioning when the body is at rest; 2) the energy used to break down food; and 3) the energy used in physical activity. For most people, the basal metabolic rate accounts for 60 to 80 percent of total energy expenditure. Digesting food accounts for about 10 percent. That leaves only 10 to 30 percent for physical activity, of which exercise is only a subset. Thermogenesis is an even more minor player, Cypess said, usually accounting for less than five or 10 percent of your total energy expenditure (depending on how much time you’ve spent in the cold).

When I asked Cypess if he had any advice about exercising and temperature, he said he’d recommend against the extremes — even extreme heat. In very hot temperatures, during activities like hot yoga, all the sweating you do is simply losing water, and that the sweating process doesn’t burn off extra calories. “Exercise at a temperature where you’re not sweating too much,” he summed up.

So if you overeat, the best thing to do is probably focus on having smaller meals later to make up for your indulgences. Exercising, even in cold weather, isn’t going to cut it alone.