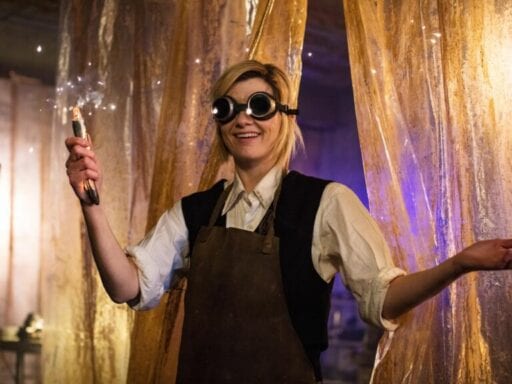 The Doctor’s new gender is just the most notable of many changes a new showrunner has made to the program.

The question raised by every new iteration of the Doctor — the central character of the long-running, 55-year-old British sci-fi franchise Doctor Who — seems simple, but offers endless variations on a single theme: Will the latest version of the show focus on the alien Doctor? Or will it pay more attention to the humans who join the newest Time Lord on the TARDIS?

Prior to now, Doctor Who has had two showrunners in its modern era, which began in 2005 with the relaunch of the series by the first of those two showrunners, Russell T. Davies. And during their respective tenures, Davies and his eventual replacement, Steven Moffat, took the show in opposite directions.

Davies’s Doctor was a whimsical madman, to be sure, but Davies was far more interested in the humans who became entangled in the Doctor’s orbit over the four seasons he ran the series.

Moffat, who took over the show in season five, was far more interested in the Doctor’s ability to solve any puzzle; while the humans on the TARDIS were frequently fascinating, it was clear his sympathies were always with the Doctor. And over the course of Moffat’s six seasons as showrunner, that approach became exhausting, at least to me.

Thus, the most welcome element of “The Woman Who Fell to Earth” — the first episode of Doctor Who under its new showrunner Chris Chibnall and the first to star a woman in the role of the Doctor — was how both Chibnall and new Doctor Jodie Whittaker pushed the focus just a little bit more back toward the people who are pulled into the Doctor’s orbit.

It takes a while for the Doctor to show up in the season 11 premiere. That’s a good call.

In the case of the former, the story similarities were obvious; both that episode and this one involve the Doctor struggling to stop an alien menace while in the process of regenerating into a new form. But I was also struck by how Whittaker’s gleefully altruistic spin on the Doctor immediately felt more akin to Tennant’s version than that of her immediate predecessor, Peter Capaldi (who imagined the character as a sort of gruff but good-natured building superintendent for the entire universe).

“The Eleventh Hour,” however, came to mind in terms of its contrast. That episode started with a human being — Amy Pond, a woman who first met the Doctor as a young girl — but it barely left the Doctor’s side as he tried to work out a mystery that kept drawing him back to Amy over the years. It was a sign that Moffat, who took over as showrunner with that episode just as Chibnall did with this one, was making a break from Davies’s sometimes cheesy but always humanistic approach to Doctor Who, in favor of elaborate structural games and puzzle-solving.

I haven’t seen any episodes of season 11 beyond “The Woman Who Fell to Earth,” but based on Chibnall’s approach to it, I’d wager that he’s going to write the show as a kind of workplace ensemble drama that just happens to be set across all of time and space. It takes the Doctor around 15 minutes to show up, and when she does, she’s discombobulated, dropping from the sky into a train where humans are being threatened by an alien. Before that, his focus is squarely on those humans.

Throughout the episode, he fully develops four different human characters, in addition to Whittaker’s new Doctor, then gives all of them their own storylines to pursue, which dovetail in the group’s final confrontation with the alien. It’s closer to Davies’s approach than Moffat’s, but it’s also not quite like either man’s spin on the material. I’m surprised Chibnall found a way to thread the needle.

Some of the episode’s human characters get a bit less shading than others — Yasmin (Mandeep Gill), the cop called to the scene of an alien spacecraft landing, is defined largely through what other characters say about her — but that’s likely because the hour is more focused on the familial bonds between a young man named Ryan (Tosin Cole), his grandmother Grace (Sharon D. Clarke), and her new husband Graham (Bradley Walsh), whom Ryan has a strained relationship with. It’s not as if future episodes won’t bring more shading to the others as well, and Chibnall’s strength building out an ensemble cast on his earlier series Broadchurch promises dividends for this approach.

Ultimately, “The Woman Who Fell to Earth” is more of a statement of purpose than anything else. Yes, there will be aliens and monsters and classic Doctor Who adventures. But this latest iteration of the show is also going to be a story that positions the humans who board the TARDIS (presuming they eventually board the TARDIS — it’s missing as of episode’s end) as an ad hoc family, with the Doctor as the matriarch.

So, then, how is the new Doctor? Quite wonderful, I’d say.

The very pointed makeup of Doctor Who’s new cast — a white woman, an older white guy, an older black woman, then two younger actors of color — is perhaps easy to read in light of the Brexit vote, which was driven, in part, by anxieties over the cultural shift that immigration brought to the United Kingdom (and, okay, also a healthy dose of outright racism).

Indeed, the Doctor all but makes this explicit in the closing moments of the episode, when she says that her own regeneration is a symbol of what human beings have to do to keep their nations and institutions fresh. You can honor the past while still evolving into something new in the present, she says; it’s not hard to imagine her unfurling a banner reading, “REMAIN” and cavorting it around the set.

But at the same time, there’s a much more immediately obvious reason for her to give this speech: Whittaker is the first woman to play this part, after 12 men got the chance. There are still concerns over just how much ground is being broken by giving a role that was previously held by a bunch of white men to a white woman, a tactic that many shows have used to appear diverse without even beginning to deal with all of the other systems of oppression built into society (as outlined in this article for TV Guide by Mo Ryan). But the fact remains that some people are hopping mad to see Whittaker play the Doctor, and yet if they want to keep watching Doctor Who, they’re going to have to keep watching Jodie Whittaker.

It’s impossible to conclude much of anything about a given Doctor from one episode — I dearly missed Christopher Eccleston for Tennant’s first few hours, but Tennant eventually became my favorite modern Doctor — but Whittaker’s first outing as the character is a promising start. She’s hampered a bit by the curious decision to have her regeneration result in at least partial amnesia for much of the episode, but that makes her ultimate statement of purpose near the end, when she reclaims the mantle of Doctor and vows to help, heal, and fix the universe, all the more powerful, so I’ll allow the initial confusion.

And that initial confusion mirrors what I’ll imagine certain portions of the audience are feeling too, especially viewers who might be missing Moffat’s Doctor or a male Doctor or [insert descriptor of choice] Doctor, or who might long for some earlier era of the show. (Maybe they hope it will once again become the children’s educational program it was initially meant to be.) Chibnall knows he can’t simply treat this change as business as usual, even if his storytelling instincts keep guiding him back to the Doctor Who tried and true.

He still does the bit where the new Doctor expresses surprise and excitement at her new form, where she chooses her new costume (after running around in Capaldi’s for almost the entire episode), where she rediscovers her sense of purpose. These are all hallmarks of the “first episode with a new Doctor” subgenre of the show.

However, both Chibnall and his star intuitively understand how these tropes shift, ever so slightly, when there’s a woman at their center. There is not, for instance, a montage of Whittaker trying on new outfits. Instead, she just emerges in her new, slightly geeky get-up. (She’s wearing suspenders??)

But the biggest change from Moffat’s Doctor is something much harder to spot, something ingrained in the storytelling from the very first scene, on Earth, with a young man trying to understand the course of his life so far, instead of out in the cosmos with a superhero trying to save the world. It signals that Chibnall is intent on making this story instantly understandable to you, even if all you know about Doctor Who is that the Doctor’s name isn’t literally Who. Season 11, all involved realize, is a great chance for the Who-curious to hop on board, to discover why this franchise is so beloved across the entire planet.

The cynic in me says it is simply a chance to put new packaging on very old stories. But the part of me that loves Doctor Who but always got a little bogged down by the sheer weight of trying to follow Moffat’s many convolutions felt a simple happy gratitude at a clean story, well-told. Moffat’s Doctor Who was for the hardcore. There’s nothing wrong with that, but there’s a whole universe of people who’ve never seen the show but who might also want to plunge headlong into the cosmos alongside a geeky, empathetic hero who always, always saves the day.