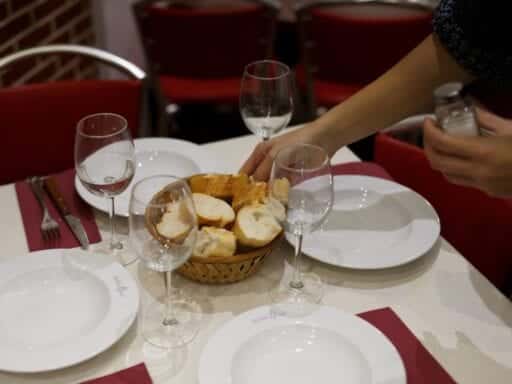 Washington, DC, voters are considering the question at the polls on Tuesday.

The impact of increasing the minimum wage has been the subject of long-held debates among economists. Although higher wages should theoretically benefit workers, researchers have also found that a spike in labor costs could lead to companies curbing the number of employees on their payroll, ultimately harming workers who end up out of a job.

For voters in Washington, DC, this question is no longer abstract. They are considering a more complicated version of this policy as they head to the polls on Tuesday. The question on the DC ballot asks whether workers who depend on tips, like restaurant servers, should see a boost in their base salary so that their hourly pay eventually matches the city’s minimum wage.

If this ballot measure, dubbed Initiative 77, is passed, the tipped minimum wage would gradually be phased out until all DC workers have the same minimum wage by 2026. It’s a question that’s divided tipped workers and businesses alike.

Restaurant Opportunities Centers United, a labor advocacy group that’s spearheading the campaign to do away with the tipped minimum wage, argues that reliance on tips can be too unpredictable for workers and force them to kowtow to the whims of customers. More than 100 restaurant owners, meanwhile, have banded together to oppose Initiative 77, asserting that soaring labor costs could hurt their already fragile bottom lines and lead to higher prices for customers and possible layoffs.

Certain workers also fear that an increase in their base wage could affect how much customers opt to tip them or the proportion of their tips that restaurants and bars let them keep. “To tell me all of a sudden we need a change when we’ve been thriving is backward thinking, truly,” bartender Frank Mills told the Washington Post.

I talked to seven labor experts about whether increasing the tipped minimum wage benefits workers. Here’s what I learned.

In a strong economy like this one, workers have more to gain

Especially in times like the present when unemployment is low and employers are often raising wages to attract workers anyway, I think the increase in the minimum wage is helpful to workers. I don’t think many will become unemployed by the change, and if they are, they will be able to find another job.

The most recent research suggests that tipped workers benefit from this change, experiencing increased take-home pay and little to no change in total employment. The restaurant industry does not appear to be harmed by increased minimum tipped wages, similar to findings for other low-wage industries. Research finds lower poverty rates, higher take-home pay, and unchanged employment after such changes, suggesting positive net effects on the broader economy.

The National Employment Law Project is a workers’ rights group that has advocated in favor of raising the minimum wage.

As director of the Seattle minimum wage study, I’ve heard many in the restaurant industry worry that doing away with the tip credit would move owners to a “no tipping” model where servers can no longer count on bringing home lots of money at the end of busy shifts. The evidence we’ve seen in the Seattle restaurant industry doesn’t show any decrease in pay. We do see some evidence, though, of hours being cut back in low-wage jobs. If you can keep your hours, and customers can still tip if they want to, then you’ll come out ahead. It all depends on what owners do about hours and what customers do about tipping.

As best we can tell, Seattle’s restaurant industry as a whole is doing well with a higher minimum wage. We do see evidence that they are cutting back on hours for low-paid workers.

So imagine a counter service restaurant where an employee brings your order to the table and buses the table for you when you are done. You might imagine the owner switching to a model where your name is called out when your order is ready and you bring it to the table, then you bus your own dishes when you’re done. That’s a way to serve you the same meal using fewer worker hours — you’re doing the work for free rather than an employee doing it for pay. It’s just one of many tweaks that business owners have told us about in adapting to a higher minimum wage.

A few workers have voiced concern that eliminating the tipped sub-minimum wage will mean no tips, or fewer tips. The former seems to be an incorrect interpretation of what Initiative 77 would do: It would phase out the sub-minimum wage for tipped workers, but it would not eliminate tips.

Regarding the latter, there is no evidence that customers tip significantly less in One Fair Wage states than they do in tip-credit states. The Bureau of Labor Statistics does not separate tips from base wages in their annual estimates, but 2017 data from the payment processing company Square suggests that restaurant customers throughout most of the country tip roughly the same: between 15 percent and 17 percent. DC is one of three jurisdictions that tips the lowest, at 14 percent.

However, in my earlier research with David MacPherson, we found that when the tipped minimum wage is increased, employers reduce the number of tipped workers they employ. As a result, some workers will benefit from the higher tipped minimum, but others will lose their jobs. Clearly, there are some winners and some losers.

The other important point is that employers might respond by changing the way their workers are compensated. For example, some restaurants have responded by raising prices to cover the higher tipped minimum wage and eliminating tipping altogether.

Here’s a story about some restaurants switching to a no-tipping policy, though it also describes how some have switched back because workers were unhappy without tips. Another possible response is to force workers to pool tips so that the employer can reallocate them across workers, though federal law does place limitations on which workers can be included in a tip pool.

Increasing the minimum wage for tipped waitstaff is necessary since the federal level of $2.13 per hour is woefully inadequate. Most states peg it at 40 to 60 percent of the minimum wage, which is reasonable. The problem with the DC proposal is that it would eventually impact the tipped minimum at the full minimum wage. If this happened, many restaurants would probably go to a no-tipping pricing where the waitstaff would become salaried.

The more modest increases in tipped minimum wages have not had an adverse impact, but … DC’s long-term making plan to make the tipped wage equal to the full minimum wage is risky.

Census Bureau economist Maggie Jones found that increasing the minimum wage for servers enables restaurants to hire more workers. This larger supply can have the effect of lowering the overall tips available to each worker when the amount of tips per shift stays the same.

I would argue, however, that there should not be exemptions for any category of workers to the Fair Labor Standards Act, which requires employers to pay at least the minimum wage. The largest category of exempt workers is tipped employees. Overall, minimum wages need to be raised so that they are livable, self-sufficiency wages that enable workers to live above the poverty level. Higher pay would benefit the economy through its stimulus effects on other businesses and provide increased tax revenue.

Given that tipped workers are disproportionately women and people of color, these policies may also reduce inequality. Moreover, given that being dependent on customers for subsistence makes tipped workers acutely vulnerable to discrimination and harassment, reducing the share of wages that comes from tips may also improve workplace climate and worker experiences.

There are roughly 2 million workers with wages at or below the federal minimum wage. (They made up 2.7 percent of all hourly paid workers.) Raising the minimum wage for tipped workers would primarily benefit women for several reasons. Seventy percent of restaurant servers are women, and these women are disproportionately women of color.

Our economy has had rising inequality, and wages are not rising enough even as unemployment thaws for a variety of reasons. There’s an impetus on the part of workers and organizations that support them to alleviate that situation and provide people with higher incomes — to pay for rising costs.

Miscarriage comes out of the shadows
Eric Greitens' nonprofit was 'criminal enterprise,' but committee must end: Mo. lawma...
A Trump judge ordered Biden to reinstate one of Trump’s cruelest immigration policies
All Senate Democrats now support a bill that would prohibit border separations
American motherhood vs. the American work ethic
How a professional dungeon master keeps his games fun