Does the USA need a new national anthem? 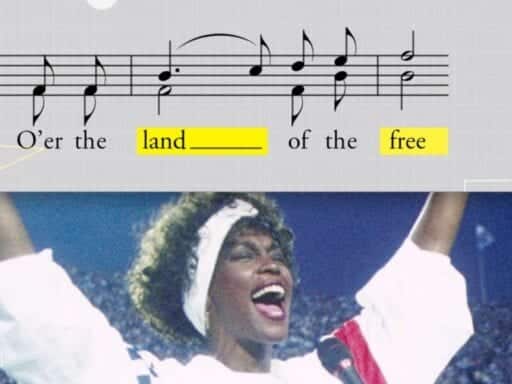 A debate on the merits of “The Star-Spangled Banner.”

In a 1906 editorial, the North American Review asked for a replacement for “The Star-Spangled Banner” as the United States’ national anthem because “the American people have been trying in vain for nearly a century to sing it.” With bizarre lyrics and a 12-note range, the song has always been a controversial choice. There’s no doubt that it’s hard to sing, but in the video above, we debate whether that’s a feature or a bug.

The music itself was not written by an American. Rather, like “My Country, ’Tis of Thee,” “The Star-Spangled Banner” was adapted from the British (and given lyrics about a war against the very same British). It’s often said that the tune was originally a “drinking song,” but that connotation is not quite right. It was composed in the 1770s by an elite men’s club of amateur musicians in London. They called themselves the Anacreontic Society after the Ancient Greek poet Anacreon, and their meetings included hours-long concerts by professional performers. The song was most likely intended for a trained soloist, and it would have sounded something like this:

As the song became popular in both Britain and in the newly independent United States, people borrowed the tune liberally. There were dozens of versions of the lyrics, including a powerful parody by an abolitionist writer. “The Star-Spangled Banner” was not even Francis Scott Key’s first go at it. So when he witnessed the resilience of Baltimore’s Fort McHenry in the War of 1812, he had “To Anacreon in Heaven” in mind as the vehicle for his poem.

The War of 1812 is perhaps an odd choice as a historical anchor for our national hymn. The war is probably better remembered as a devastating turning point for native peoples than as a great victory for the United States. That may be part of why the lyrics are so hard to remember.

As literary critic Richard Grant White wrote in 1861, “They are almost entirely descriptive, and of a particular event … they paint a picture, they do not embody a sentiment.” Instead of a statement of values that we can hold ourselves to, the lyrics describe a flag that was “still there” after a night of bombardment from the British navy. (A flag, by the way, that was not especially hard to see, as it was ginormous.)

The stanzas that we sing today are composed of a series of oddly worded questions, and singers routinely stumble over the second of those:

Whose broad stripes and bright stars through the perilous fight, O’er the ramparts we watched, were so gallantly streaming?

But the descriptive, localized content of “The Star-Spangled Banner” meant that it had something that its competitors (“America, the Beautiful,” “Hail, Columbia”) lacked: A constituency. As historian Marc Ferris wrote in his fascinating book about the song, “Many Marylanders count the land and sea battles that began on September 12, 1814, and lasted for two days as the proudest legacy in the state’s history.” The 1931 law designating it the official anthem passed after being introduced by Maryland Rep. John Linthicum six times. It had also garnered the support of the Army, the Navy, and the Veterans of Foreign Wars.

Now, after several waves of immigration, a Civil War, the abolition of slavery, two World Wars, and multiple transformative civil rights and social movements, we’re still singing about the Battle of Baltimore, but the way we sing it has changed completely. “The Star-Spangled Banner” has become a national sport.

We throw performers Gladiator-like into the ring with the song, put them on national television, and mock the vanquished. But without failure, there is no glory. And when the song is beautifully or creatively rendered by a skilled performer, it can be transcendent.

Whether a national anthem should be singable by the masses or a stage for the exceptionally talented is the crux of our debate in the video at the top of this post, in which we enlist a vocal coach and a music theory expert to explain what it takes to properly perform this song.

Infants and pregnant women will soon pay the price for Trump’s wall shutdown
Trump wants to get back to the Oval Office. He may still be contagious.
Former eBay employees allegedly used spiders and swingers to cyberstalk newsletter authors
Here’s how Facebook plans to make decisions about controversial content it’s taken down
The best $193 I ever spent: A mountain of detective fiction when my wife was pregnant
“Abolish ICE” shows how far left Democrats have moved on immigration