Dominance and reputation: How Trump thinks about Iran 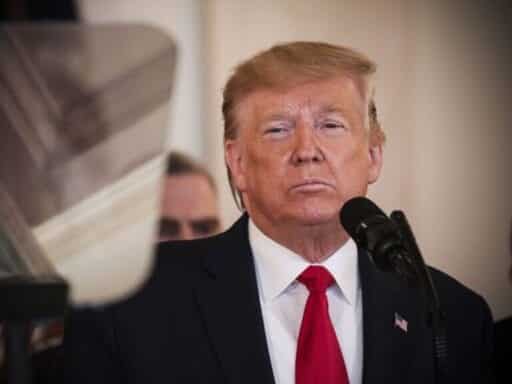 Share
Loading...
President Trump addresses the country regarding the situation with Iran, on January 8, 2020. | Yasin Ozturk/Anadolu Agency via Getty Images

What was President Donald Trump thinking when he made the shocking decision to order the killing of Iranian Maj. Gen. Qassem Soleimani?

One interpretation of Trump, popular among some of his critics, is that he lashes out wildly without any calculation whatsoever. But having covered Trump for years, I believe that assessment is incomplete. The killing could well have been reckless and poorly thought-out, and could well lead to disaster. But it does fit fairly coherently into Trump’s worldview and a pattern of his calculated behavior as president — in that it seems to have mainly been a dominance play.

Trump views the world in terms of zero-sum conflict, dominance vs. weakness, leverage, and reputation. He believes that by making threats, the US (the most powerful country in the world) can intimidate other countries into changing their behavior at least somewhat.

He’s spent years making wild threats against foreign rivals. But he mostly hasn’t followed through on them, hoping the threats will be enough. The problem was that, after the recent Iranian-backed violent protests outside the US embassy in Iraq, Trump appears to have concluded that his reputation — at home and abroad — was at risk. He feared being humiliated, and looking weak.

So he decided it was time to show he wasn’t all bark and no bite. And he did so by doing something truly unexpected and risky — ordering the assassination of an extremely powerful Iranian military leader (a step rejected by the two previous administrations, though reportedly proposed earlier this year by Trump administration officials).

Many quickly speculated that Trump was now eager for war or had chosen it for political reasons. But while Trump did follow up the strike with more extreme threats, he also made sure to insist he does not support war or “regime change” in Iran. And when the Iranian response came in the form of missile strikes on US facilities in Iraq that produced no deaths, Trump deemed it sufficiently nonthreatening, and declared victory.

It’s a dangerous game. But Trump’s behavior, though it may well be hideously irresponsible and misguided, should be understood not as a deliberate stampede toward war but as an attempt to assert his dominance over Iran. He wanted to make sure Iran thought twice before further humiliating him with stunts like the embassy attacks, or by killing Americans — by proving that, sometimes, he does indeed follow through on his threats of retaliation.

Trump has long made wild threats. But he often hasn’t followed through.

What does Trump actually want? In my view, he’s chiefly concerned with his own political interests and reputation. He truly doesn’t want to start a new war in the Middle East (he’s said George W. Bush’s Iraq War was an utter disaster that only weakened the US). But he also doesn’t want to look weak, be humiliated, or “lose” in his dealings with foreign adversaries.

Trump doesn’t particularly care about establishing a reputation for the US as a morally upstanding actor in the world. (“We’ve got a lot of killers,” he famously said shortly after assuming the presidency in 2017. “What, do you think our country’s so innocent?”)

Both at home and abroad, Trump is obsessed with strength, weakness, and dominance. He also fancies himself a master negotiator and “dealmaker,” and often uses extreme tactics in the hopes that they will improve his leverage or convince his opponent to back down.

Trump followed this playbook by threatening to bring “fire and fury” to North Korea in 2017 — but he followed that up with the first-ever direct top-level talks between the two nations. Also, in June of last year, Trump came very close to striking Iran (in retaliation for Iran’s downing of a US drone) but called it off at the last minute, saying he wanted to avoid a broader war.

In theory, what Trump wants is to just make the threats, and get what he wants — or at least, to get something that could let himself declare victory — without having to follow through on them.

But this doesn’t always work out. What’s been happening lately, to Trump’s ire, is that other nations have concluded these threats are in fact empty — and they’ve called Trump’s bluff. Kim Jong Un, for instance, has signaled he may soon restart long-range missile or nuclear tests.

Regarding Iran specifically, the US has for some time been locked in a shadow conflict with Iran for influence in Iraq and elsewhere in the region.

The US foreign policy establishment cares deeply about combating this Iranian influence campaign, but Trump cares little about it in and of itself. Again, he is mainly concerned with his own political interests and reputation. He knew he wanted to rip up the nuclear deal with Iran, but mainly because it had been made by President Barack Obama. As far as broader ambitions for the region, Trump would prefer the US to cut back its involvement.

The US-Iran shadow conflict has often been violent but it has proceeded under certain understood “rules of the game” (involving, for instance, deniable operations or proxy groups rather than direct combat).

But Trump’s hawkish advisers, particularly Secretary of State Mike Pompeo, have made the case that Iran started pushing the envelope more and more since the US pulled out of the nuclear deal — for instance, by attacking Saudi ships in the Persian Gulf and downing a US drone this June. That latter incident led Trump to threaten major reprisals (though, as mentioned, he backed down).

According to the Washington Post, Pompeo has long insisted that Trump’s well-understood desire to pull out of the Middle East has emboldened Iran — and that this was exacerbated when Trump backed down from the planned June strike. Iran did indeed seem to conclude Trump’s threats were largely empty, with the country’s supreme leader tweeting at him, “You can’t do anything.”

That guy has tweeted that we see Iran responsible for the events in Baghdad & we will respond to Iran.
1st: You can’t do anything.
2nd: If you were logical —which you’re not— you’d see that your crimes in Iraq, Afghanistan… have made nations hate you. https://t.co/hMGOEDwHuY

According to the New York Times, the key turning point — the thing that finally seems to have convinced Trump to see things Pompeo’s way — was Iranian-backed attacks on the US embassy in Baghdad in late December.

Why? Because Trump’s political reputation was at risk.

You see, some Trump critics had begun referring to those attacks as “Trump’s Benghazi” (a reference to the 2012 attacks on American diplomatic facilities in Benghazi, Libya, that Republicans harshly criticized the Obama administration for failing to prevent).

So after the attacks, per the Times, Trump approved the “extreme option”: a strike on Soleimani. And the decision left top Pentagon officials “stunned.”

Trump likely intended this as an attempt to try and assert his dominance, and to prove that he really will act in outrageous and shocking ways sometimes. His reputation for dangerous unpredictability (which he evidently sees as an asset) had waned somewhat since he took office. And this was indeed a stunning move that appeared to violate norms against targeting foreign leaders. And Trump then threatened that he was ruthless enough to go even further, by saying he’d overwhelmingly retaliate against a response from Tehran he deemed unacceptable, including against Iranian cultural sites.

Yet Trump accompanied this by saying he did not support “regime change” and doesn’t want war. So he seemed to be sending a message — that Iran had gone too far with the embassy attacks, and that they should show more restraint in the future, or else — but, if they did show more restraint, this wouldn’t be the start of a larger US war.

It was a dangerous gamble. But for now, at least, it appears that Iran doesn’t want war — the regime responded, but in a way that didn’t kill any Americans. Yet in asserting his dominance in the short term, Trump could be creating more problems for the US in the longer term.