Donald Trump and the crisis of elite impunity 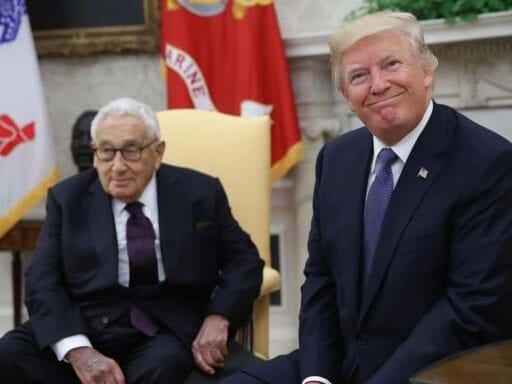 The Russia scandal is about more than collusion. It’s also about the corruption of America’s elites.

As seemingly every national political figure not already hopelessly in the tank for President Trump rushed Monday to denounce his disastrous press conference with Russian despot Vladimir Putin, few condemnations received as much attention as this one from former CIA Director John Brennan:

Donald Trump’s press conference performance in Helsinki rises to & exceeds the threshold of “high crimes & misdemeanors.” It was nothing short of treasonous. Not only were Trump’s comments imbecilic, he is wholly in the pocket of Putin. Republican Patriots: Where are you???

I don’t know why Trump and his team accepted, and at times actively solicited, the help of Putin and Russian intelligence in winning the 2016 election, and why they have appeared at times to actively serve Putin’s interests once in office. Maybe they were just taking whatever help they could get; maybe the pee tape is real; maybe Jon Chait is right and Trump has been a Soviet/Russian agent for three decades.

But I think I know why Trump thought it was okay to do what he did — why he could get away with it. The reason is a culture of elite impunity, where business and political leaders face absolutely no accountability for misdeeds. And it’s a culture which Brennan, and many political elites like him, have fostered, and from which they have personally benefited.

It’s much bigger than collusion. It encompasses many decades during which political officials have evaded accountability for broken laws and illicit foreign contacts, and business and corporate elites have skirted punishment for outright fraud. It’s a problem that, ironically, Trump hammered home in the campaign: that there’s a different set of rules for elites than for normal people. It just happens that Trump knows that because he, for decades now, has been taking advantage of elite impunity.

And unless critics are willing to target the problem of impunity, a problem in which some of them may be implicated, stuff like the Russia scandal will just keep happening, again and again.

The culture of impunity

We don’t punish white collar criminals in this country. Not really, and certainly not by comparison to how we punish poorer, less white people for less severe offenses.

Only one Wall Street executive ever served jail time for the financial crisis. Rampant foreclosure fraud during the crisis, in which mortgage companies illegally forced millions of families from their homes on the basis of false evidence, went largely unpunished. Lanny Breuer, Obama’s assistant attorney general for the criminal division of the Department of Justice, was so notoriously lax that Obama’s White House counsel Kathy Ruemmler once jokingly asked him, “How many cases are you dismissing this week?”

And no one knows how easy it is to get away with complicated financial crimes better than Donald Trump. For decades, he was able to dodge any consequences for his routine collaborations with the Mafia, even though his relationship with (to give just one example among many) the mob-linked union official John Cody prompted the FBI to subpoena Trump. His real estate businesses are routinely entangled with corrupt officials abroad, with the Trump International Hotel & Tower Baku in Azerbaijan and the Trump office towers in India looking particularly fishy. (Under the Foreign Corrupt Practices Act, even unknowingly profiting from corrupt activities in a foreign country is a federal crime.)

And the people around him have similarly checkered histories. His longtime personal attorney Michael Cohen is, of course, currently under federal investigation from the US Attorney’s office for the Southern District of New York and has been linked to various insurance fraud schemes, including one involving recent Russian immigrants falsely claiming they were hit by cars. Ivanka and Donald Trump Jr. were nearly charged with fraud for their conduct in marketing the Trump SoHo hotel and condo development in 2012.

Jared Kushner is facing lawsuits for his role as a slumlord in the Baltimore area and for overcharging rent from his New York City tenants; we know that his company falsified rent control paperwork in New York. Kushner stands out among Trump’s associates in that his father is the rare person actually prosecuted for and convicted of serious financial crimes, which doesn’t seem to have made the younger Kushner any more cautious. If anything it appears to have made him more committed to the family trade.

Donald Trump, Ivanka, Donald Jr., Michael Cohen, and Jared Kushner aren’t under criminal indictment just yet. (Of course, Paul Manafort, Trump’s former campaign chairman, is, and for serious financial crimes that are so far largely unrelated to his work for Trump.) Maybe it’s all just a series of awful coincidences. Or maybe they have correctly perceived that you can get away with truly massive white-collar crimes, and have lived their lives accordingly.

Political crimes are basically never punished, even with a body count

This same culture exists, perhaps to an even greater degree, for political wrongdoing. The Russia scandal should have, but largely hasn’t, reminded us that a presidential candidate has collaborated with a foreign government against the American government before, and gotten away with it. In the summer of 1968, as biographer John A. Farrell has demonstrated, Republican nominee Richard Nixon and his aides actively sabotaged efforts by Lyndon Johnson’s administration to negotiate an end to the Vietnam War. They got away with it, prolonging a war that wound up killing over a million people in the process. It’s barely even on the list of Nixonian wrongdoing that people remember. Henry Kissinger was at the time a Johnson adviser leaking information for Nixon to use in his efforts. Today he remains a broadly respected elder statesman, even in Democratic administrations.

It wasn’t even two decades later that the next Republican administration conspired with a foreign government, namely Iran’s. This time the actions weren’t just horrendously immoral but illegal as well; elongating the Vietnam War was, alas, not a crime, but funding the Contras with Iranian arms deal money was. So was lying to Congress about it. Fourteen members of Reagan’s administration were indicted, and 11 were convicted.

Lawrence Walsh, appointed independent counsel to investigate Iran-Contra, would later write, “What set Iran-Contra apart from previous political scandals was the fact that a cover-up engineered in the White House of one president and completed by his successor prevented the rule of law from being applied to the perpetrators of criminal activity of constitutional dimension.”

And because the rule of law wasn’t applied, many of the perpetrators remain members in good standing of DC’s foreign policy establishment. Poindexter returned to government to run the George W. Bush administration’s Information Awareness Office and “Total Information Awareness” program, leaving after a public controversy around a betting market he wanted to create where bettors would’ve profited if a terrorist strike occurred. Abrams, whose far worse transgressions in the Reagan years involved his support for El Salvador’s brutal military dictatorship and his efforts to cover up the El Mozote massacre, worked as a senior National Security Council official for the entirety of the George W. Bush administration.

In that administration, of course, dozens of policymakers collaborated to systematically violate US and international law forbidding torture. While low-ranking Army soldiers and officers were court-martialed in certain cases, like Abu Ghraib, the people ultimately responsible for the policy regime got away with it. John Yoo and Jay Bybee, who put together memos authorizing systematic torture of detainees without trial, escaped all prosecution. Yoo is a tenured professor at UC Berkeley. Bybee is a federal judge with life tenure.

The Obama administration not only declined to prosecute CIA officials who tortured detainees in accordance with the torture memos, but failed to prosecute them even in numerous cases where those guidelines were exceeded. As Vox’s Andrew Prokop explained in 2014, the Justice Department didn’t even bother to bring charges in the cases of Gul Rahman and Manadel al-Jamadi, who were literally tortured to death. Nor did they bring any charges against Jose Rodriguez, who authorized the destruction of 92 tapes showing the CIA torturing detainees, or against anyone who assisted Rodriguez. Gina Haspel, who Rodriguez has said drafted the order to destroy the tapes, and who herself ran a CIA black site for torture in Thailand, is now the director of the CIA.

Impunity means we will only get more wrongdoing

With that history — with such a clear record that neither businesspeople engaged in systematic financial wrongdoing, nor political officials involved in criminal activity and illicit deals with foreign powers will ever face any consequences — why on earth wouldn’t someone like Trump, a man who lacks any willingness to sacrifice his self-interest in order to do the right thing, work with Russia? Why wouldn’t he feel okay asking Russia to hack Hillary Clinton’s emails? Why would Donald Trump Jr. have any reservations at all about accepting help from the Russian government, declaring, “If it’s what you say I love it”? People like them, in their shoes, have done the same or worse before, and gotten away with it. Henry Kissinger even got a Nobel Prize.

The obvious rebuttal here is that the Trumps are different. They’re distinctly immoral, uniquely willing to fly in the face of decency and patriotic duty and basic morality to make money and gain power. They don’t need a culture of impunity to do horrible things. To which I’d respond: yes, obviously. That’s who they are. But there will always be people like that, and there will be more as long as we maintain a system that gives them total immunity from criminal or even professional consequences for their actions.

Donald Trump Jr. himself, in his typical “say the loud part quiet and the quiet part loud” way, laid all this out pretty clearly in an interview with the Senate Judiciary Committee. “What about the thing that says, ‘It is part of Russia and its government’s support for Mr. Trump,’” Heather Sawyer, a Democratic counsel for committee, asked him. “Did you also love that?”

“Did you understand that that would be problematic?” Sawyer pressed. Trump answered: “I didn’t think that listening to someone with information relevant to the fitness and character of a presidential candidate would be an issue, no.”

Donald Jr. was coached meticulously before that hearing, so it’s hard to read too much into what he’s saying. But I believe him. I believe he genuinely didn’t think that collaborating with the Russian government to get his father elected would be an issue.

That’s what impunity means: it means not thinking that grievous wrongdoing will one day be an issue. It helps explain why even decorated civil servants like John Brennan at best remained silent about, and at worst participated in, the CIA’s torture regime. It wasn’t an issue for him, ultimately; he eventually became director, where he could defend torturers at greater length.

But that’s exactly the problem. It should be an issue. We’ve set up a system where the baseline assumption is that nothing short of, I don’t know, full-on in-person murder can disqualify an elite political or business figure from their posting. And that means that people like the Trumps will continue to believe that criminality and collusion are just fine. Unless we’re willing to break down that system, and interrogate the role that even Trump’s enemies have played in building it, we will get two, three, many Trumps in the future.

How sex toys made their way to the shelves of Walmart
Trump pushes out head of largest immigration agency — and wants Ken Cuccinelli instead
Trump just ended HealthCare.gov in Georgia
Senate Republicans have officially passed rules for the impeachment trial. Here’s what comes next.
A warning sign for House Republicans in 2018: Democratic challengers are out-fundraising them
Will the government shutdown affect tax refunds and returns? Maybe not.