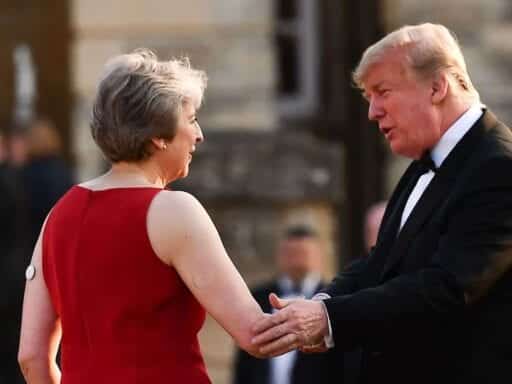 Just in time for the president to arrive in London after a tense NATO summit.

President Donald Trump just wreaked havoc at the NATO summit, and he’s keeping up his streak as he arrives in the United Kingdom.

Trump gave a combative interview to the Sun, a (Rupert Murdoch-owned) British tabloid. Trump blasted Prime Minister Theresa May for her handling of Brexit, complicating an already dicey political situation for May who’s dealing with an unfolding political crisis of her a split within her party over negotiations to leave the European Union.

Trump sided with the “Brexit” hardliners, saying that those who want to see a “soft Brexit” — basically continued access to the EU’s single market — saying it would “kill” any deal with the US.

This really isn’t what May — who hosted Trump and his wife, Melania, for what seemed like a congenial dinner — needs right now, as her party threatens to fracture over Brexit negotiations.

Indeed, Trump couldn’t help throwing a few bombs into the UK’s fraught domestic politics. He complimented Boris Johnson — the former London mayor who quit his post as foreign secretary in protest over May’s Brexit negotiations — saying he was saddened that he was leaving government. “Well I am not pitting one against the other,” Trump said, when asked if Johnson could ever be prime minister. “I am just saying I think he would be a great prime minister. I think he’s got what it takes.”

What’s more, May faced some pressure for hosting Trump, including protests for inviting the US president for a formal state visit. Even now, Trump isn’t getting the warmest welcome in the United Kingdom. Mass protests are expected tomorrow in London — complete with a giant “Trump baby” balloon. And even though Trump is avoiding the city, the public opposition is clearly on his mind.

Which gets brings us to the rest of Trump’s wild interview with the Sun. It hits on pretty much every controversial topic, with Trump happy to opine.

The full interview of Trump kicking dirt into the face of the UK prime minister is up while she hosts him for a state dinner. Why would any western leader (or a staunch ally) open themselves up to this level upon level of insult? https://t.co/tFX8XiYWdV pic.twitter.com/sY0gD8XzDW

But perhaps most notable was Trump’s bashing of London mayor Sadiq Khan. Trump has a long-running feud with Khan, and the US president escalated it in the pages of the Sun.

Trump accused Khan of being soft on crime and terrorism — picking up on the theme that helped instigate his feud after London was hit by terror attacks in 2017.

But what seemed to upset Trump most was London’s general rejection of the president. Trump is trying to avoid the city, as massive protests are expected. Khan approved the permit for protesters to fly the giant “Trump baby” balloon. He seemed to blame his less-than-warm reception on the mayor himself:

“I think he has not been hospitable to a government that is very important. Now he might not like the current President, but I represent the United States.

Trump’s comments are likely to fuel, rather than tamp down protests on Friday. It’s also likely to make an awkward day of meetings with May, who now has one more political problem to deal with.

A majority of House Republicans voted to reject results from Arizona and Pennsylvania
11 questions about the Covid-19 coronavirus outbreak, answered
Even worse than Jeffrey Goldberg’s sexist quote was his gaslighting of a journalist
Hurricane Florence: what we know about the powerful storm heading for the Carolinas
November 2019 Democratic debate
The winter solstice is Saturday: 9 things to know about the shortest day of the year