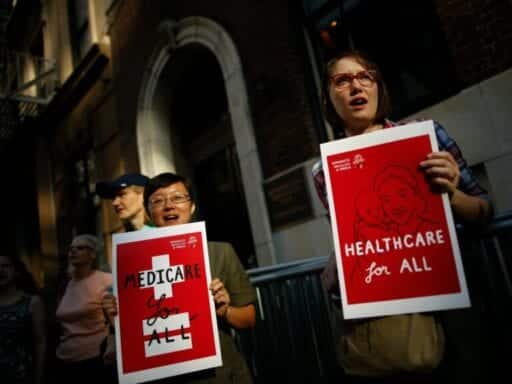 A market-based solution can’t work if Republicans won’t let it.

Medicare-for-all — a government-run insurance program that everyone is either covered by or at least eligible for — is unequivocally the future of progressive health care policy.

True, there are many unanswered questions about what “Medicare-for-all” really means, how much it would really cost, how you would finance it, and, critically, how you would transition from point A to point B while restructuring the health care system. But whether the Democratic Party should pursue it is no longer in doubt.

That’s in part thanks to the work of activists and organizers who’ve been working in the single-payer trenches for years.

But it’s also thanks to the Trump administration, which, having failed to repeal the Affordable Care Act, has undertaken a nearly unprecedented campaign of regulatory malfeasance that aims to prevent it from functioning and minimize the number of people on whom it bestows comprehensive health coverage.

Republicans are, of course, entitled to act like this if they want to. But their determination carries a powerful lesson for Democrats. If they believe that universal health insurance is a moral imperative — as they have since at least Franklin Roosevelt’s time — then only a very heavy-handed government program is going to get the job done.

There are lots of alternatives based on subsidies and regulations that work in principle and are used in practice in many European countries. But in a democracy, a workable regulatory system needs to be able to survive the regular alternation of parties in power. The lesson of the Trump era is that the Obamacare approach can’t do that. It’ll take a big, dumb program that just keeps trundling along unless Congress actually repeals it — like how Social Security checks keep going out no matter who’s president.

As a candidate, Donald Trump promised to replace the Affordable Care Act with something “terrific” and vowed to create a system that would “take care of everyone.”

More conventional Republicans were less explicit, but virtually all of them from Mitch McConnell and Paul Ryan on down were clear in their criticism of the high premiums and deductibles facing many people on the ACA exchanges and their desire to “replace” the Affordable Care Act with something that would still protect patients with preexisting conditions. When it came time to write actual repeal laws, it turned out they were all lying — the idea was to enact a big tax cut and pay for it by giving fewer people lower-quality health insurance.

It proved to be politically toxic, but Republicans almost did it anyway — passing a hideously unpopular bill through the House and securing 49 votes for a Senate bill so terrible that many Senate Republicans denounced it even as they voted for it. But it didn’t pass, Doug Jones won a Senate special election in Alabama, and Republicans moved on to their true passion of just cutting taxes with no offsets at all. Then came the time for Trump and his administration to govern, and they’ve consistently done so in ways that degrade the quality of insurance available to middle-class exchange buyers:

All of this has the effect of pushing Obamacare premiums higher, because it undermines the core regulatory bargain at the heart of the law. The ACA vision was to create a well-functioning market of competing private insurance plans based on the concept that if everyone bought insurance, then insurers could be forced to cover patients with high levels of medical needs without charging exorbitant premiums. On average, costs would be contained across the population, and everyone would get the peace of mind and preventive care that comes with being enrolled in a comprehensive health insurance plan.

Democrats’ assumption in putting together this system was that no administration would be so politically reckless as to take steps to deliberately make insurance more expensive and less accessible. But Republicans are really sticking to their guns on this. They want to tear down the Obamacare regulatory framework, and they are going to do it whether or not they have the votes in Congress to formally pass repeal. So if Democrats want to pursue the dream of universal health care, they’re going to have to do it through old-fashioned government programs.

Government-run health insurance is the future

Way back in January 2007, I wrote a column arguing that if Democrats couldn’t get a single-payer health plan enacted post-Bush, they should just expand Medicare and Medicaid as much as they possibly could and then try again to expand them more sometime later.

Instead, the party chose another path — hoping to get all at once to universal coverage while only incrementally changing the structure of the American health care system. The hope was that doing it this way would get buy-in from important stakeholders in the health care system — doctors, hospitals, nurses, pharmaceutical companies, etc. — and perhaps even garner some votes from Republicans. This worked well enough to get a bill passed (which, frankly, is more than I expected it would achieve), but the other benefits have been elusive. No Republicans voted for the bill, and though interest groups really did oppose repeal measures last year, the political onslaught is not exactly ferocious.

Republican members, in other words, aren’t facing “Harry and Louise”-type ads from industry, and what campaign contributions they may have lost out on are more than made up for by support from ideological right-wing donors.

But they also don’t have anything constructive to say on the subject. As Jonathan Chait writes, “having spent years insisting they had an army of wonks who could design a better alternative to the Obamacare ‘train wreck,’ the Republican plan of attack has dissolved into a rearguard sabotage campaign with no pretense of doing anything to help the poor and sick afford medical care.”

The simple fact is that though they don’t like to admit it, they just disagree with the moral premise that the government has an obligation to ensure that people get the health care they need. And that’s going to mean doing it the old-fashioned way — by enrolling as many people as possible, including, ultimately, everyone in government programs that keep operating unless Congress actually repeals them.

The notion of a compromise strategy that would allow Democrats to achieve their basic goals while being flexible and industry-friendly with the means was appealing on a number of levels, but it depended fundamentally on the notion that Republicans would treat such a compromise as stable. The reality is they won’t, so Democrats will have to choose — either abandon a generations-long principle (which isn’t going to happen) or move forward into the single-payer future.

Vox Sentences: We’re on a bullet train toward 3D-printed guns
How Mama Jan, the vocal coach behind Justin Bieber and Drake, creates superstars
Instagram’s co-founders just quit. That could be bad news for Facebook.
How “kombucha girl” revolutionized internet fame
Why the coronavirus may be killing more Americans than the government data says
2020 ties for the hottest year on record