Donald Trump is trying to steal the 2020 election. America is ignoring him. 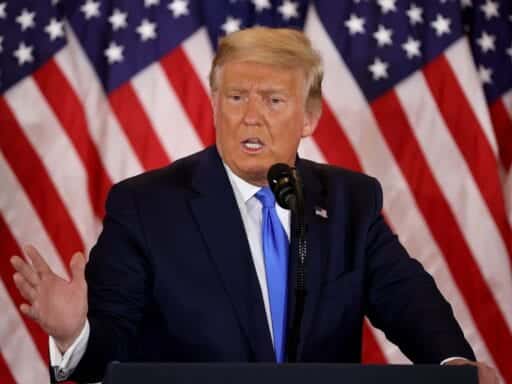 Share
Loading...
President Donald Trump speaks on election night in the East Room of the White House in the early morning hours of November 4, 2020, in Washington, DC. | Chip Somodevilla/Getty Images

What’s most noteworthy — and oddly hopeful — about the 2020 election is how people are ignoring Trump’s antics.

President Donald Trump is actively trying to stop votes from being counted in the 2020 presidential election and making false claims that Democrats are stealing a win from him.

It would all be so damn terrifying if we weren’t all, well, used to it.

Let’s be clear about what’s happening: As his opponent Joe Biden edges closer to victory, Trump is launching tweet after tweet after tweet in an attempt to delegitimize the election. He’s filed lawsuits to stop the vote count in Pennsylvania and Michigan without evidence of wrongdoing. And he gave an early Wednesday address in which he prematurely claimed victory even though there were millions of votes to be counted in battleground states.

Seeing a leader aim to subvert the electoral process in an attempt to maintain power is the kind of behavior the US government would condemn if it were happening in any other nation. But it’s not. It’s happening here.

While Trump’s behavior is troubling — and make no mistake, it’s deeply troubling — what’s most noteworthy is how almost everyone is ignoring it.

States are continuing to count votes, as they are legally bound to do, despite the president’s wishes. Trump-friendly networks like Fox News are denouncing Trump’s proclamation of an election win as “extremely inflammatory.” Basically, everyone is carrying on with the election even as Trump openly wars against it.

Perhaps it’s not so surprising. Trump has spent the last five years claiming elections have been rigged against him, that the press is the enemy of the people, and that a “deep state” conspires against him. He has had no problem sending militarized law enforcement around the country to dole out punishment to those ideologically opposed to him.

That Trump would say and act in such a way isn’t a bug, it’s a feature. In that sense, one would think the US would be in crisis, inching toward a democratic finish line it may not reach, all because Trump keeps pushing it back or erasing it altogether.

But it’s not. It’s moving forward with an election that, as of Wednesday evening, looks likely to have former Vice President Joe Biden legitimately replace Trump. The only people Trump has successfully rallied to his cause are those in his very immediate orbit, not the broader public and not even most of his allies.

Directly following Trump’s claim that he won on Wednesday morning, Vice President Mike Pence hedged with a simple, “We are on the road to victory,” and said that the campaign was confident Trump would win reelection after all votes were counted. The usual process, then, not Trump’s heavy-handed method.

The oddly hopeful message of the 2020 election so far may therefore be the abject failure of Trump’s authoritarian machinations to keep the country stuck where it is. If anything, it looks like the country is swiftly moving along despite him.

How the Supreme Court revived Jim Crow voter suppression tactics
A year of protest, as seen through street art
This year’s Super Bowl ads are dominated by nostalgia
More companies want to be “carbon neutral.” What does that mean?
Photojournalism needs to face its #MeToo moment
One Day at a Time