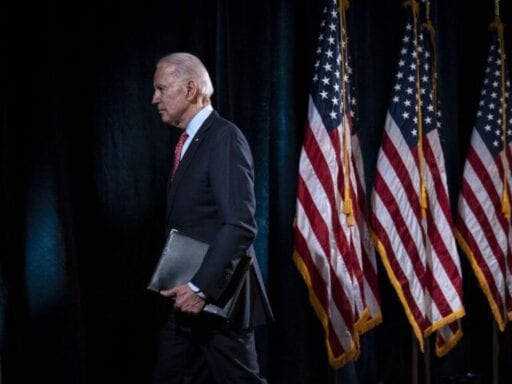 Joe Biden isn’t a pedophile, but the truth may not stop right-wing extremists from weaponizing “Creepy Joe.”

The meme, which has been circulating online in right-wing meme forums as well as communities and hashtags devoted to the “Creepy Joe” meme, highlights the fact a number of women have said the presumptive nominee touched them inappropriately. It depicts Biden saying, “See you later alligator,” with an alligator responding, “In a while, pedophile.” On Instagram, Trump, Jr. initially framed the meme as a joke, and later repeated the claim on Twitter.

But even as he insisted that he was joking, Trump, Jr. pushed the idea further, commenting that the Democratic presidential candidate should “stop the unwanted touching and keep his hands to himself,” comparing Biden’s public appearances with children to his heavily criticized interactions with women.

1. The 3 emojis in the caption should indicate to anyone with a scintilla of common sense that I’m joking around.

2. If the media doesn’t want people mocking & making jokes about how creepy Joe is, then maybe he should stop the unwanted touching & keep his hands to himself? https://t.co/Jy98aq6yWD pic.twitter.com/Kcr9jdPSbC

There is, of course, no evidence anywhere that Joe Biden has ever had inappropriate contact with children. But that hasn’t stopped the “Creepy Joe” meme from proliferating all over the internet, as a nagging but persistent thorn in the side of Biden’s campaign.

The “Creepy Joe” meme was born out of media images of Biden apparently standing much too close to a litany of women at public appearances. Such images have floated through the media for years, usually framed as jokes.

In 2019, several women came forward to say they felt Biden’s behavior was nonconsensual. However, one woman depicted in the memes, Stephanie Carter, has objected to the meming of the photo she appeared in, writing in March 2019 that “The Joe Biden in my picture is a close friend helping someone get through a big day, for which I will always be grateful. So, as the sole owner of my story, it is high time that I reclaim it – from strangers, Twitter, the pundits and the late-night hosts.”

The meme has seen increased popularity in recent weeks, after former Senate staffer Tara Reade filed a criminal complaint against Biden for a sexual assault she alleges Biden committed in 1993; Biden has denied the allegation. (President Trump has similarly denied accusations made by 22 women of sexual assault or misconduct.)

This is all a stark contrast to the caricature of Biden that dominated the internet during the Obama administration: that of a fun-loving, relatable sidekick. But even as Biden’s campaign has remained focused on drafting policies and building coalitions, the “Creepy Joe” caricature has only grown stronger over the months. Trump, Jr. didn’t have to look hard to find a handy example of the meme: they’re everywhere. The image he used in his follow-up tweet, for instance, has been circulating broadly since at least 2018.

For his part, Trump, Jr. has constantly joked about Biden’s unfitness for president on his social media, with most of his cracks taking aim at Biden’s alleged senility or lack of intellect. He has also referenced the “Creepy Joe” meme a number of times, as recently as a month ago:

Honestly I’m not sure if this is real or fake at this point. I would not even be a little bit surprised if it was real. Everyone has their priorities and Joe’s definitely involve uncomfortably sniffing other people. Creepy Joe.

Of course, there’s a huge leap from “hair-sniffing” to “child molester” or even “inappropriate behavior” to “child molester” — at least there should be. But in a world where the “creepy uncle” stereotype, in which an older man can’t help but engage in socially unacceptable behavior, is one we have been conditioned to accept (and make light of), that leap becomes an easier one for Trump, Jr. to make. And the image the president’s son used — just one of a cavalcade of “Creepy Joe” memes — uses that conditioning to make its assertions seem at least possible to casual observers, if not true.

It shouldn’t be necessary to say that it’s unconscionable for a member of the sitting president’s family to make such a grim assertion about a presidential candidate without any evidence whatsoever, even as a joke. But the truth is that we’re well past the point at which such flagrant accusations make a dent in a media cycle that’s constantly inundated with President Trump’s anger and attacks on his opponents, especially given that studies have found Trump fans don’t care that such accusations aren’t true.

In fact, in the strange disinformation-saturated culture of 2020, it’s not only useless to say that the meme isn’t true — it’s probably perversely useful. That’s because Trump, Jr. has a history of sharing such memes, serving as “dad’s ambassador to the fringe.”

And on the fringe, ideas that initially read as false tend to attract true believers.

Trump, Jr. used a tactic often seen at the beginning of a false idea’s adoption by fringe groups, particularly extremists.

Facing backlash over the meme, the president’s son claimed he was “joking” while semi-seriously promoting preposterous and unfounded ideas. This echoes the strategies of the right-wing extremists and white supremacists whose content he routinely amplifies, some of which are ultimately amplified by President Trump himself. Perhaps nowhere is this technique seen as often as with the spreading of racist memes and conspiracies — it has long been the cornerstone of the alt-right playbook. The strategy is essentially a three-step process:

That might sound brazen and overly simple, but it’s proven an effective tactic to spread everything from genocidal white supremacy to actual neo-Nazi propaganda. As one neo-Nazi YouTuber bluntly put it when asked how to convert people to his ideology: “Pretend to joke about it until the punchline /really/ lands.”

It’s tempting to assume Trump, Jr. was just making a joke and that anything beyond that is an overreaction — but that’s exactly the purpose of memes like these, and exactly the type of dismissal that allows them to foment public reaction and spread further. It doesn’t help that Instagram itself, where Trump, Jr. initially posted, has evolved into a platform where extremist memes proliferate.

Trump, Jr. chose to drop the “pedophile” meme just days after the New York Times reported that President Trump’s staff is worried about his dwindling support among voters over 65. And while it’s unlikely that voters over 65 are checking Instagram for dank memes, it is possible that a completely unfounded meme that begins as a “joke” could evolve into a conspiracy theory, one that could get enough attention to warrant serious “debate” from platforms senior voters do pay attention to, like Fox News. After all, we’ve seen such conspiracies get mainstream air time before — and by “before” I mean just last week, when the nonsensical conspiracy theory “Obamagate” became a topic of discussion.

So, whether or not Trump, Jr. was really joking, his sharing of the “pedophile” meme could give the idea a push into the mainstream right, despite being unfounded. With so much on the line in an unprecedented election year, even a totally baseless accusation like this against the presumptive Democratic presidential candidate is a messy, nasty complication that could derail more salient topics along the campaign trail.

After all, President Trump is still amplifying social media that promotes Pizzagate, the false pedophile conspiracy against his 2016 opponent which, along with innumerable similar extremist memes, arguably helped him win the election.

Given how well that strategy turned out for the president, it’s highly unlikely he’ll let a false pedophilia accusation against his 2020 opponent go to waste.