Donald Trump seems fine with Nazis gathering on his lawn 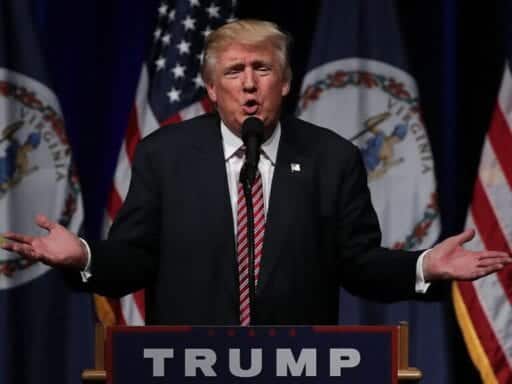 A year after Charlottesville, the president still doesn’t call out white supremacy by name

If Donald Trump was home Sunday afternoon, he could peel back a curtain and watch Nazis gather in a park so close to the White House it might as well be his lawn. But instead of yelling what a typical old man might (“get off!”), he’s gone with a much more tolerant message.

Members of the same alt-right and white nationalist groups who stormed Chatlottesville, Virginia a year ago, marching with tiki torches and chanting slogans from the Third Reich are descending on Lafayette Square in the second “Unite the Right” event.

The tweet is arguably better than his performance a year ago, though the bar is low. Last year Trump stood in the lobby of his tower in Manhattan and argued that the left is equivalent to Nazism: “there is blame on both sides.”

Despite Nazis literally planning to gather outside his window, Trump still refuses to speak to or acknowledge them directly. And while presumably white supremacy would fall under his umbrella rejection of “all types of racism,” the language is the kind used by groups who don’t believe racism uniquely harms people of color, but is as bad or even worse for whites. The notion of “all types of racism” is itself a rejection of what racism really is.

Over the last year, there’s been a fair amount of hand-wringing over when Trump will just say the right thing: Nazis are bad. White supremacy is bad. Maybe it’s time to accept that there’s a reason, a year later, he hasn’t.

Even years into the Trump era, there’s still a reluctance to take the president’s word at face value. When he says something patently racist about a group of people (whether describing a “shit hole country” or an entire nationality as “rapists”), maybe that is actually what he thinks.

There’s still time for @realDonaldTrump to put out a better statement. Here’s a suggestion:
“I repudiate white nationalism. The sentiments expressed by the organizers of Sunday’s rally are repulsive. I will re-examine my own deeds and words to ensure I give bigotry no comfort.” https://t.co/NoUUVy7Ahv

Of course Trump could release another statement. He just doesn’t want to. His remarks are consistent with what he said a year ago. As CNN reported at what felt like a baffling event last year:

“I think there is blame on both sides,” Trump said during a contentious back-and-forth with reporters in the lobby of his Midtown Manhattan building.

This isn’t unfolding in a political vacuum. Trump’s path to victory was the white vote. He can’t afford to lose any of it. When it comes to the alt-right, Trump relies on his son as an emissary. Don Jr. retweets alt-right users and sends his own dog-whistle tweets.

Don Jr. once posted an Instagram photo of himself as the alt-right meme Pepe the Frog, surrounded by other members of the Trump team (and Trump himself).

A friend sent me this. Apparently I made the cut as one of the Deplorables All kidding aside I am honored to be grouped with the hard working men and women of this great nation that have supported @realdonaldtrump and know that he can fix the mess created by politicians in Washington. He’s fighting for you and won’t ever quit. Thanks for your trust! #trump2016 #maga #makeamericagreatagain #basketofdeplorables

Trump isn’t uncomfortable with dealing with controversy personally. My colleague Emily Stewart notes “he has criticized plenty of individuals and groups by name — including NFL players for peacefully protesting during the national anthem and NBA player LeBron James just in the last week alone.”

To Trump, that seems like good politics. For some reason, he believed calling out the protesters would not be. If there was one thing this polarized country could actually agree on, it was that we crushed the Nazis and it was great. Now? Who knows. Regardless, his stance on Charlottesville didn’t measurably shift his base’s attitudes toward him.

Trump has said again and again what he thinks. He’s had a year to change his mind. He hasn’t. If Trump wanted to indict the alt-right, he could. He just doesn’t want to.

2 winners and 4 losers from Trump’s 2020 reelection campaign launch
The untold story of the migrant “caravan”: how Trump’s border crackdown endangered immigrants’ lives
How K-pop fans are weaponizing the internet for Black Lives Matter
10 legal experts on the future of Roe v. Wade after Kennedy
Recode Daily: WeWork might be worth just half of what it once was
How to (temporarily) close a restaurant