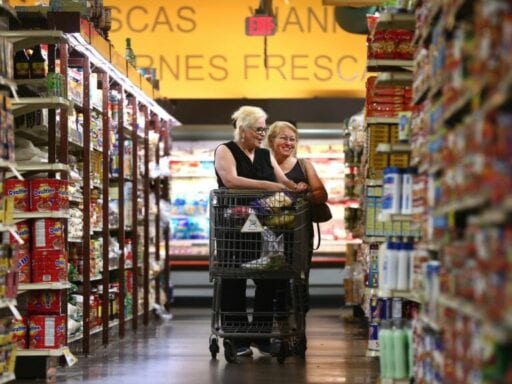 That’s even more people than the previous year.

The US Census Bureau dropped its annual load of statistics on American poverty and income, and the data shows Americans weren’t much better off in 2018 than they were a year earlier.

On the upside: 2.3 million more people snagged full-time jobs and the official poverty rate fell half a percentage point.

On the downside: Fewer people have health insurance and women earned about 82 cents for every dollar a man earned. Middle-class incomes hardly budged.

But one of the most interesting data points released each year shows the massive economic impact that federal “entitlement” programs, such as food stamps and housing subsidies, have on low-wage workers.

During President Donald Trump’s second year in office, income from these safety net programs directly kept 47.7 million people out of poverty. That’s 2.8 million more people compared to 2017. So far, Trump and congressional Republicans have been unable to gut spending on the safety net programs, facing resistance from Democrats whose votes they needed to pass a budget deal.

Of all these programs, Social Security had the biggest impact last year, keeping 27.3 million people above the poverty level, which was $25,100 for a family of four in 2018. Refundable tax credits, such as the earned income tax credit, helped another 7.9 million people. Food stamps (a.k.a. SNAP), disability insurance, and housing subsidies each kept about 3 million people from falling into poverty.

That good news, however, was (partly) canceled out by one of the most persistent drivers of economic hardship: health care costs. In 2018, out-of-pocket medical costs, which includes health insurance premiums, copays, and prescription drug costs, pushed the incomes of 8 million people below the poverty threshold. That’s still an improvement from last year, when 2.9 million more people were impoverished by medical bills.

This chart sums it up well:

Republicans want to chip away at the social safety net

It’s no secret that Trump and Republican leaders in Congress want to gut the government’s anti-poverty programs. The president’s budget proposal for fiscal year 2020 would slash spending on Medicare, food stamps, and housing assistance over the next 10 years. It includes a $220 billion cut to SNAP and $25 billion taken from Social Security. And Republican leaders on Capitol Hill would love to help him do so.

But Congress is still trying to hammer out a spending bill to fund the government for the rest of the year and Republicans will need to get some Democrats on board to avoid a potential shutdown. So they might not be able to squeeze the social safety net as much as they are hoping they can.

Up until now, though, Republicans have been toughening up work requirements, hoping it will knock people off welfare.

In January 2018, the Trump administration let states to impose work requirements for Medicaid, which provides health care to Americans who are poor and disabled. Then in April 2018, Trump told his Cabinet to find other social services on which they could add work requirements or make existing rules harsher.

This popular GOP solution to deal with poverty conveniently leaves out an important fact: Millions of full-time workers qualify for welfare because businesses pay them poverty wages and wages are hardly rising. These social welfare programs could be the only reason millions of low-wage workers have food on the table.

That doesn’t seem to concern the Trump administration. The White House is more focused on taking money from government programs to beef up immigration enforcement and to build his border wall. While Republicans don’t seem interested in stopping him, they do have to pass a spending bill with Democrats this month to keep the government open, so there’s chance that funding for food stamps and Social Security could become part of the budget fight.

A Prince Andrew interview has renewed questions about his relationship with Jeffrey Epstein
The Trump administration’s new move to undercut affirmative action, explained
The impeachment hearings went public. Here are the most important takeaways.
The Russian bounties on US troops in Afghanistan scandal, explained
Aberdeen, Maryland, shooting at Rite Aid distribution center: what we know
After Trump supporters surround a Biden bus in Texas, the FBI opens an investigation