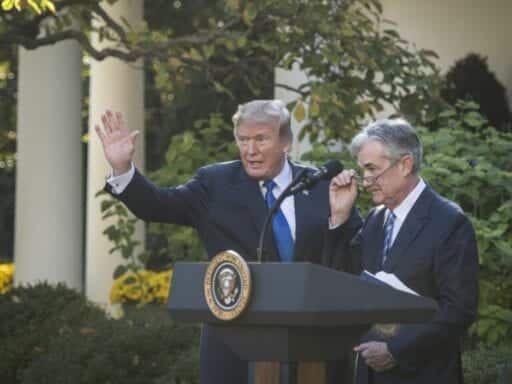 He wants lower interest rates and doesn’t know how to get them.

Trump also appointed three of the other four sitting members of the Fed’s Board of Governors. It is, in other words, very much Trump’s Fed. And there are two more vacancies on the Fed board that Trump can fill (there are seven seats in all). Republicans control the Senate, and it’s no longer possible for the minority party to veto presidential appointees.

Yet rather than be happy with the team he’s chosen, or modify the team by adding two new members to the board, Trump has spent his time publicly feuding with the Fed. In a June 10 CNBC interview, he mused that “we have people — it’s more than just Jay Powell — we have people on the Fed that really weren’t, ah, they’re not my people.” And last October he said the Fed was “going loco” in their decision-making.

Trump’s desire for lower interest rates that would boost growth is not that unusual from a president, but vocal public criticism of the Fed chair is essentially unprecedented.

Trump has only escalated his rhetoric in recent days. Powell criticized Trump in a speech delivered in Jackson Hole, Wyoming, on August 23, explaining that the Fed cannot fully offset the economic harm of Trump’s disruptive trade policy with China.

Trump fired back, asking whether Powell is a bigger enemy than China’s authoritarian leader, Xi Jinping.

….My only question is, who is our bigger enemy, Jay Powell or Chairman Xi?

Trump’s conduct in this regard has been at turns inappropriate and incompetent, doing a lot to further unsettle financial markets and little to advance any of his objectives. In turn, Bill Dudley, a former top official at the Fed, went well outside the bounds of appropriate behavior for a central banker and suggested it might be a good idea to try to sabotage Trump’s reelection. The obsession with the Fed also reeks of excuse-making for his policy failures — Trump’s ideas about trade are wrong, his tactics don’t make sense, and the tax cuts didn’t work.

Yet for all that, Trump’s basic view that the Fed should cut interest rates more aggressively may well be correct.

What the Federal Reserve has been doing

The Fed has a fairly broad set of powers, but Trump’s criticism relates to its decisions around setting short-term interest rates. The central bank’s Board of Governors is appointed by the president, but it makes decisions independently of the White House, and so far Trump has not tried to break the norm against firing Fed governors.

The Fed’s job is a balancing act: Lower rates are supposed to stimulate economic growth (by making it easier for businesses to finance investment and for households to buy cars or major appliances). The problem, in theory, is that if you stimulate growth too much, you’ll get inflation — the desire to spend money will run ahead of the economy’s ability to produce things.

During the Great Recession, the Fed slashed interest rates to zero and kept them there for years in an effort to help the United States economy recover. The theory is that low interest rates boost both investment and consumption because it’s cheaper to borrow, and therefore, there’s less incentive to save.

In December 2015, the Fed raised rates for the first time since 2006, by 0.25 percentage points. The Fed then spent the next three years slowly but steadily raising rates, by a quarter of a percentage point each time, under both Yellen and Powell.

Trump, being an unprincipled opportunist, had criticized the Fed for keeping rates too low under Obama, but has now flip-flopped and become an advocate of lower rates as president.

I have been consistently critical of the Fed’s eagerness to raise rates under both Obama and Trump, but conventional wisdom was on the Fed’s side throughout this period. Then on July 31, the Fed changed course and did a quarter percentage point rate cut amid a broader set of fears about the global economy.

But this was not good enough for Trump, who has kept up a steady drumbeat of tweets urging even lower rates, arguing that it’s impossible for America to compete with foreign countries who are issuing government debt at negative nominal interest rates.

Our Federal Reserve cannot “mentally” keep up with the competition – other countries. At the G-7 in France, all of the other Leaders were giddy about how low their Interest Costs have gone. Germany is actually “getting paid” to borrow money – ZERO INTEREST PLUS! No Clue Fed!

In typical Trumpian fashion, this is confusing two issues that are at best loosely related. The European Central Bank’s policy rate does not determine borrowing costs in Germany or the Netherlands. Ultra-cheap government debt in Northern Europe reflects a combination of austerity budgeting and a poor overall growth outlook.

The Fed and the trade war

Where competition is relevant is that Trump thinks the Fed should be doing more to help him win at trade war with China.

There are a lot of complexities to this issue involving American tariffs, Chinese retaliatory measures, exchange rate fluctuations, farm bailouts, and more. But trade disruptions, in the aggregate, hurt both economies. This sets up a game of chicken. Ending the trade war would, on its own, be a “win” for both sides. But whichever country can convince the other that it is more willing to ride out the pain can gain the upper hand in negotiations.

In this dynamic, Trump’s big advantage is that China is more trade-exposed, so the war hurts China more than it hurts the US.

China’s edge is that their authoritarian political system makes it easier for Xi Jinping to get away with lying about what’s going on and, in principle at least, gives the country more unity in making decisions. Trump, by contrast, has only limited authority to change American public policy without congressional assent, and House Democrats have limited incentive to go along with Trumpian efforts to “win” against China.

This is where the Fed comes in. Trump appointed most of the Fed board, but he doesn’t control its decision-making. He wants the Fed to boost the economy with aggressive rate cuts to give him the upper hand with Xi.

Powell’s point is that he can’t just make the harms of trade disruption go away, he can only partially mitigate them. Trump is mad about this, and, on some level, his anger doesn’t make much sense. If he really wants to boost the economy, all Trump needs to do is make a face-saving deal with China and let things go back to normal. Nonetheless, it is just factually accurate that monetary policy has not been sufficiently oriented toward growth.

All of Trump’s nonsense aside, here’s the reality: If you go back to 2015 when the Fed started raising interest rates, inflation was well below the Fed’s 2 percent target rate. More broadly, if the Fed was successfully targeting 2 percent, then inflation would be above 2 percent roughly as often as it is below 2 percent. In reality, inflation has been systematically below target.

That low inflation, on its own terms, is fine. Everyone likes it when prices are low. But it’s a sign that the Fed was more aggressive than it needed to be in terms of raising interest rates, and slower than it should have been in recognizing its error and changing course.

It should be said that while Trump’s criticisms on this front are accurate, he’s hardly been consistent. The rate hikes began when Obama was president, and at the time Trump said rates were too low. Given the narrowness of Trump’s election victory, it is possible (or even likely) that had the Fed not made this mistake, the slightly faster economic growth in 2016 that would have resulted from lower rates would have pushed Hillary Clinton over the line. So Trump, personally, is not the victim. The victim is hundreds of thousands of people who could have gotten jobs faster had the Fed been more cautious about these rate hikes.

And Trump seems to have no idea how to actually fix this problem.

If Trump were good at being president, he would take advantage of the two outstanding vacancies on the Fed board to shift policy.

He could accomplish this by asking his staff to identify for him the names of four or five well-qualified economists who have had a proven track record over the years of agitating for lower interest rates. You’d want to find people who had taken a principled position in this direction dating back to before Trump won the election. This is a minority viewpoint among economists but not exactly a super rare one, and it would not be challenging to produce the names.

Trump might want to further insist that the picks be solid Republicans, which would narrow the range considerably but hardly put it down to zero. On the off-chance that Trump is reading this, I would suggest he look at Karl Smith and David Beckworth.

Picks like this would be confirmed by the Senate, and then their presence would nudge monetary policy in the direction Trump wants.

What Trump has been doing, however, is floating the names of various hacks or people like Judy Shelton who have no track record of advocating for pro-growth monetary policy until it became clear that’s what Trump wanted them to say. His first two picks along these lines, Stephen Moore and Herman Cain, went down in flames and his third — Shelton — seems to be struggling somewhat.

But Trump doesn’t seem to understand that this failure to properly select nominees is the root of his problem, leading him instead to focus on yelling at Powell on Twitter as his preferred approach to policy change. This in theory might work (though compromising the Fed’s institutional independence would be a problem), but on some level seems at least as likely to backfire, making Fed board members think they need to protect the Fed’s independence by not doing what Trump wants. If such pushback happens, it will be a minor tragedy — Trump doesn’t understand the relevant issues at all, but his general preference is correct — but that just goes to show that having a president who has no clue what he’s doing isn’t a great idea overall.

The constitutional change at the heart of the UK Parliament’s endless deadlock
“Give me a fucking break”: What Melania Trump said about the blowback against family separations
Trump approvingly tweets video of his rally crowd harassing a journalist
Promising Young Woman finds the thrill in obliterating nice guys
“Don’t call the woman in Michigan” — Trump’s pettiness was on display during Friday’s coronavirus br...
Why Trump may not be to blame for immigrants being booted from the military