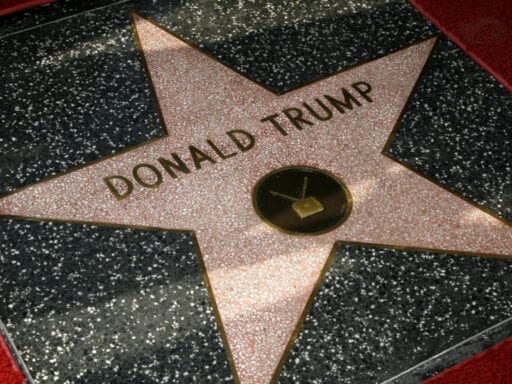 This is the second time someone has taken a pickaxe to the star.

Breaking: Donald Trump’s star on the Hollywood Walk of Fame. Or rather, the star is now broken, after being vandalized overnight. A man with a pickaxe is reportedly the culprit.

“Multiple people—including police—tell me a man walked up with a guitar case and pulled out the pick axe. Then, it’s believed, he called police himself to report it, but left the scene before they got here,” NBC LA’s Jonathan Gonzalez reports.

Gonzalez tweeted a picture of the dusty rubble that was formerly Trump’s star:

So this just happened again… somebody used a pick axe to destroy Donald Trump‘s star on the Walk of Fame. Still trying to learn more, but we know it’s been vandalized multiple times, just never on this level. @NBCLA : Victor Park/Loudlabs pic.twitter.com/lzq7YrsSRV

The culprit reportedly called Beverly Hills Police to report the vandalism, then left the scene. According to the Hollywood Reporter, he was later arrested.

While we don’t know the motive of the pickaxe-wielding star destroyer, the stars on the Hollywood Walk of Fame represent a certain level of distinction for celebrities. (Though technically, anyone famous is eligible to receive a star as long as they express interest in having one and someone pays the $30,000 application fee.)

Fast Company reports that Trump received his Walk of Fame star in 2007, at the peak of his Apprentice fame — but notes that the star was actually awarded for Trump’s work as a producer of the Miss Universe pageant, not for being the face of the once-popular reality show. Bashing in Trump’s star is essentially destroying a symbol of Trump, especially since he is largely analyzed as a celebrity president who is obsessed with his own fame and TV ratings.

This isn’t the first time Trump’s star has been vandalized. In October 2016, a man named James Lambert Otis used a pickaxe and sledgehammer to damage the star. Otis — who was more public about his vandalism and told CNN he was doing it in support of women who had accused Trump of sexual assault — was charged with felony vandalism.

The star was also targeted in 2017, when someone defaced it by writing “Fuck Trump” on the star in black marker.

Trump has yet to comment on his broken Hollywood star.

The US doesn’t just need to flatten the curve. It needs to “raise the line.”
Virginia and North Carolina exit polls highlight Joe Biden’s strength with black voters
Ta-Nehisi Coates on why political power isn’t enough for the right
In The Garden Party, family discord gets a beautifully retro, modernist treatment
The pandemic hasn’t stopped Native Hawaiians’ fight to protect Maunakea
Working from home can make people more productive. Just not during a pandemic.