“Don’t be a tough guy! Don’t be a fool!”: Read Trump’s wild letter to Turkey’s Erdogan 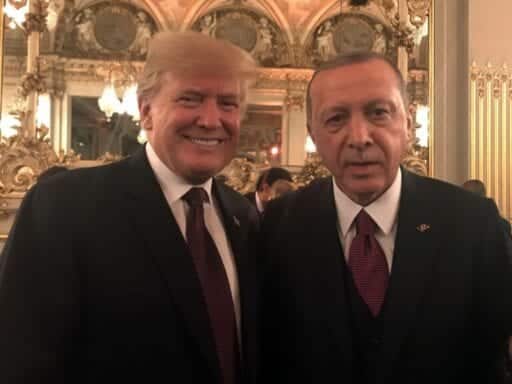 Share
Loading...
President of Turkey Recep Tayyip Erdoğan poses for a photo with US President Donald Trump during a dinner hosted by French President for visiting heads of states in Paris, France, on November 10, 2018. | Turkish Presidency/Handout/Anadolu Agency/Getty Images

This is one of the most astonishing letters in diplomatic history.

President Donald Trump sent a letter to Turkish President Recep Tayyip Erdoğan last week urging him to make a deal with the Kurds, saying: “Don’t be a tough guy” and “Don’t be a fool!”

The letter is dated October 9, which means it was written just three days after Trump ordered the withdrawal of US troops from northern Syria. The goal of the letter, it seems, was to convince Erdoğan not to send his forces into Syria to attack the Kurds, who had been the American military’s strongest partner in the fight against ISIS.

“You don’t want to be responsible for slaughtering thousands of people,” Trump writes, before threatening to destroy Turkey’s economy if Erdoğan doesn’t heed his demands. Trump then calls on the Turkish president to make a deal with Kurdish leaders so they don’t fight each other.

But, as we now know, Turkey did launch its offensive against the Kurds — on October 9. It’s unclear when Erdoğan received the letter.

EXCLUSIVE: I have obtained a copy of ⁦@realDonaldTrump⁩’s letter to #Erdogan. ⁦@POTUS⁩ warns him to not “be a tough guy! Don’t be a fool!” Says he could destroy Turkey’s economy if #Syria is not resolved in a humane way. Details tonight at 8pm #TrishRegan #FoxBusiness pic.twitter.com/9BoSGlbRyt

The letter, first obtained by Fox Business’s Trish Regan on Wednesday and confirmed by other reporters, goes against every tenet of decorum and presidential communication. It’s brash, nasty, and lacking any diplomatic tact whatsoever.

“Having helped draft a few presidential letters to foreign leaders, I want you to know that this is not what they normally look like,” Kelly Magsamen, a former official who worked under both the Bush and Obama administrations at the State Department, Pentagon, and National Security Council, tweeted about the letter.

It also shows that Trump has personally tried to mediate the conflict in Syria that he himself kickstarted by withdrawing troops last week, even though on Wednesday he told reporters that the conflict “has nothing to do with us.”

“I view the situation on the Turkish border with Syria to be, for the United States, strategically brilliant,” the president said in the Oval Office.

Vice President Mike Pence and Secretary of State Mike Pompeo are on their way to Turkey now to attempt to negotiate some kind of ceasefire deal between Erdoğan and Kurdish leaders — a deal the Turkish president has vowed not to make.

It’s possible the administration leaked the letter to the friendly network as a way to send a message to Ankara before the talks. Trump also mentioned on Wednesday that the White House might release the letter.

Regardless of how it got out, the letter shows that American foreign policy is firmly in Trump’s hands — and, like it or not, run by his own unvarnished words. But if Erdoğan is upset about this whole thing, perhaps he and Trump can smooth it over on the phone. “I will call you later,” the commander in chief ends the letter.