Don’t wait: the case for giving sooner rather than later 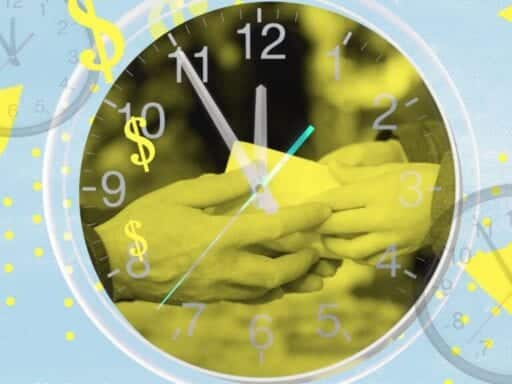 Share
Loading...
Should you donate to charity now? Save up to donate later? Put it in your will? | Javier Zarracina/Vox; Getty Images

If you want to do good, it’s probably a good idea to donate regularly.

Tomorrow is Giving Tuesday, the day for donations and a national conversation about how to give back and do good. If you want to donate to charity, should you go out and pick an organization today? Or should you wait, save your money, and leave it to charity in your will (or at least donate it down the road)?

There’s a case for either of these approaches. To some extent, the answer depends on what you think the highest priorities for donation are — and whether you think you’ll be a more informed donor later in your life.

On the whole, though, close observers of the nonprofit world tend to think that donating your money now is likely to achieve more good in the world than saving it up to donate after you die. That’s because donations now can, in some senses, make the donor better at doing good, and because history suggests that many of the best giving opportunities out there aren’t going to be around in 10 years — let alone in 50.

The case here is a little complicated. In a field like global health, we know about lots of interventions that are valuable. As more money pours into supporting an important intervention, it will probably spread widely — especially wherever the conditions are ripe for it.

For example, a new innovation that improves traffic safety will probably first spread in the rich countries that can afford it, so that after a few years, the places lacking it will be ones where it’s complicated to deploy. A new surgery that prevents a health problem will probably first be offered in places with good medical care, to patients whose conditions don’t have added complications. Once those patients have been treated, handling remaining cases will be more expensive. That means that money given now will go further than money given later, once we’ve already solved the problems that can be solved cheaply.

So for any given organization — whether it’s treating fistulas from childbirth or deworming kids — we might expect donations to be most needed fairly early on, when there are a lot of problems that can be solved easily, and to go further than they will later, when most of the problems that remain are ones that are harder to solve. Donors will have found the “low-hanging fruit” in a cause.

How seriously to take this argument depends on which cause you think is the most promising. Last fall, I reached out to Julia Wise, president of Giving What We Can at the Centre for Effective Altruism, for advice. “If you want to work on global health and development,” Wise told me, “the best opportunities are now.” There are already lots of organizations providing health services, and the problems they’re working on are mostly improving, so money now will probably go further than it will in five years.

“For causes that we know less about, where our understanding is more in its beginnings,” Wise thinks there’s a case for waiting. In a few years, we might discover a new giving opportunity that’s better than any of the existing ones. On the other hand, “in these areas where the evidence is thin, the right thing to do is fund research. If we’re all waiting for somebody else to fund things so we could find out what works, then we could be waiting for a long time.”

Giving What We Can encourages people to give every year — though some participants give to a donor-advised fund, an account that you control and from which you can choose a charity to give to later. Wise and her husband donate 50 percent of their income to charities, and they’ve chosen to donate every year.

Wise pointed out that one of the most important effects your donation has is encouraging a charity that is running programs you believe in, helping them to expand those programs and invest more energy there. If you’re strategic about donating to charities that are running trials of promising new programs and learning through their research how to best get results, then your donations can actually change which giving opportunities are available in the future.

“We’ve been really encouraged to see evidence-based charity growing as people are supporting it with their donations,” Wise said. “We see that as improving the charitable landscape and making it so charities have an incentive to continue conducting and participating in research about their work, so everyone can know the best places to donate.”

This incentive effect works much better with living, active, engaged donors. Charities will respond to donations this year by thinking about what work they need to do to still be a good target for donations next year. “If we delay,” Wise said, “we’re not participating in improving the state of knowledge.”

Giving now might help you commit to a generous life

“My husband and I have decided to donate now rather than waiting until later,” Wise told me. “Part of that is thinking that works best with our motivation. It makes it a steady part of our life rather than part of the indefinite future.” Telling yourself you’ll donate someday in the distant future isn’t the same as donating every day.

People who’ve taken Giving What We Can’s pledge often describe the same motivation. “Giving now cultivates your own virtue, and ensures that you’ll continue to live up to your own ideals,” Haseeb Qureshi wrote last year in an essay about this question. “You are not a perfect creature. Even if you intend to do something hard now … you always have to factor in the possibility that you’ll change your mind or regress.” The best way to be someone who will want to give away money in your will, then, is to give money now.

Wise also thought habits were important, so much so that she recommended people donate a little bit of money even if they’re early in life and building their limited savings. “It can be good to donate on a regular basis so you’re still making decisions about where to give and keeping it a part of your life,” she told me.

Giving later might help you be a more informed donor

But there are good reasons to consider delaying your donation. Some charities are vastly more effective than others. Some highly effective charities are so flooded in money that they don’t use additional donations to expand their programs — meaning that your money won’t achieve much.

That variance in effectiveness is a reason why you might want to give later instead of giving today. If you don’t know much about the opportunities out there, it’s not a good idea to pick a charity haphazardly without a clear understanding of what they will do with your money and why they’re competent to do it. A few thousand dollars to charity can save a life. It should be treated as seriously as any other decision that could save a life.

If you want to commit to giving now, but you don’t feel equipped yet to make an informed choice about where to give, one option is a donor-advised fund. You make the donation now (and take the tax deduction now) but can choose any qualified charity to donate the money to later. Donor-advised funds are one way to set the money aside for charity while giving yourself more time to learn.

But this is probably a reason to wait five years — not 40. You’d have to do a lot of ongoing research to keep your will up-to-date with the giving opportunity you’ve found the most promising — and once you’re doing all of that work and have identified the best giving opportunity out there, it’s probably worth just giving to it.