DoorDash and Uber Eats aren’t collecting sales tax on delivery fees in some states. That could be a problem. 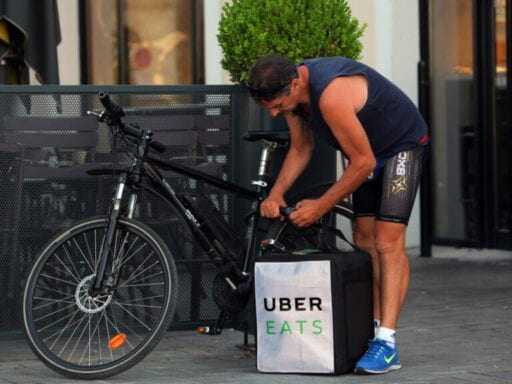 It could be the latest business practice in the gig economy to raise regulatory questions.

The food delivery company Grubhub said it has collected hundreds of millions in taxes for delivery and service fees in dozens of states since at least 2011. But Recode has found that in some of those same states, Grubhub’s top rivals in the delivery space, including DoorDash, Postmates, and Uber Eats, don’t appear to be collecting a cent. This discrepancy puts those rivals in a precarious position if regulators take notice and object.

Several tax experts Recode interviewed said food delivery app companies’ tax practices could raise legal concerns. The sales taxes in question are on fees that can amount to as much as a third of the total price of food orders — or at least $120 million per year of taxable dollars on the sales of major food delivery companies in California and New York alone, based on Recode’s calculations on an estimated market size from research firm Forrester. If you account for all of the US, that could amount to hundreds of millions of dollars per year.

The experts told Recode these tax practices could be a liability not just for the food delivery apps but also for the restaurants whose food they deliver. Both the apps and the restaurants could later be on the hook for paying taxes that apps aren’t currently collecting. It’s another example of how existing laws haven’t yet adapted to the gig economy — and in the meantime, these tech companies are taking advantage of the loopholes.

“I would feel very uncomfortable if I were tax counsel for one of those companies if those taxes weren’t being collected,” said Hayes Holderness, assistant professor at the University of Richmond School of Law and a state tax policy expert. Holderness called it an “aggressive” and “risky” decision for companies not to charge sales taxes on delivery — but a “not necessarily unreasonable” stance, and one that could be debated in court. For companies in the competitive food delivery market, the immediate business benefit of keeping sales taxes lower could also outweigh the legal risks, he said.

Gig economy companies have historically loosely interpreted the law — or in some cases skirted it entirely — to benefit their business models, and regulators are increasingly examining their behavior.

The Washington, DC, attorney general announced earlier this week he’s suing DoorDash, arguing that the company misled customers and pocketed workers’ tips. Earlier this year, politicians raised concerns about wage theft when Instacart, DoorDash, Uber Eats, and several other companies were found to be using workers’ tips to subsidize their own costs (the companies all eventually revised their policies — with DoorDash being the slowest to do so — and many workers continue to report low pay). In September, Uber made a baffling argument that its drivers aren’t core to its business as part of its rationale for why a new labor law targeted at gig economy apps didn’t actually apply to the company. And ride-hail companies have similarly been accused of not doing enough to prevent and investigate sexual assaults that occur during rides.

In every case, gig economy companies have argued that they are digital marketplaces matching sellers and buyers and are therefore not financially or legally responsible for things that happen on their platforms.

When it comes to sales tax, companies have an obvious business incentive to avoid charging it: keep prices low, keep customers happy, and keep sales up. And in the food delivery space, which is an increasingly competitive industry with tight margins, that’s an acute pressure.

“Right now there’s an arms race for customer acquisition,” said Sucharita Kodali, a principal analyst at Forrester who specializes in e-commerce. “As venture capital startups, the more growth they can exhibit, that’s still the signal of success, and any lever they can use to help showcase those metrics helps.”

In the past year, DoorDash has emerged as the unexpected market leader and fastest-growing food delivery app in the US, according to research firm Edison Trends, unseating market incumbent Grubhub. The company has aggressively expanded its business, putting pressure on an already crowded market.

If tax laws were more clear, food delivery companies would probably just absorb the cost of charging sales taxes on delivery fees and “move on,” Kodali told Recode. But, Kodali said, in “an age of ambiguity, if it helps them to showcase a better result then why not?”

But it also poses a risk. If states or cities find companies liable for taxes later, they could sue for years of back taxes, several tax experts told Recode. That’s what happened to travel website Expedia, which several cities accused of avoiding as much as $847 million in taxes on room fees. The company has long been embroiled in legal battles over these cases. More recently, the state of New Jersey recently sued Uber for over $650 million in unemployment and disability insurance taxes for allegedly misclassifying its workforce as independent contractors instead of employees.

Laws haven’t caught up with the gig economy

The tax codes governing food delivery apps like Grubhub, DoorDash, and Postmates vary significantly state by state, and they are changing as local governments grapple with how to adapt old laws to the new gig economy.

Generally, some laws in states like California and New York have provisions that could call for sales taxes on delivery and service fees to be collected, according to Scott Groberski, a managing director in state and local tax groups at accounting and tax firm Grant Thornton. Still, it’s very much a gray area and would vary based on the specifics of the contracts between restaurants and food delivery providers.

“With new technology, it’s extremely complicated determining what’s taxable and what’s not — I think this is something that continues to evolve even as we speak,” Groberski told Recode.

In California, for example, it depends if the company contracts with restaurants to “provide a delivery service only” or if it acts as a “retailer” of the food, according to Casey Wells at the California Department of Tax and Fee Administration.

Whether or not a food delivery app company is a retailer depends on the contracts it has with restaurants, Wells said, as well as if the app is marking up the price the restaurant normally charges for the food.

Wells declined to comment on whether or not the law would classify specific companies like DoorDash or Grubhub as retailers or not.

Some tax experts said it comes down to whether these companies are charging the restaurants they work with or only charging consumers. Grubhub, DoorDash, Uber Eats, and Postmates all regularly partner with restaurants and charge them commission fees.

“I have a real doubt that Grubhub is overtaxing — the default rule should be that it’s taxable, that is the safer position,” said Holderness.

“In some cases, it may not be a question of tax avoidance or uncertainty so much as legitimate uncertainty about what the rules are,” said Steve Rosenthal, senior fellow at the Urban-Brookings Tax Policy Center. Policies vary state to state, and the rules around taxing delivery fees are myriad and often outdated.

When asked about concerns tax experts raised about Uber’s sales and delivery tax policies, a spokesperson for Uber responded with the following statement:

“We collect sales tax on delivery fees where required, with particular attention to recently enacted marketplace facilitator laws. Although California has enacted similar legislation, there is an exception for delivery network companies. Accordingly, we do not believe it is appropriate for Uber Eats to collect sales tax on delivery fees from our users in California at this time. We are deeply committed to compliance, which includes ongoing assessment of developments in local legislation and state-issued guidance.”

In a statement to Recode, Postmates said it is in compliance with all regulations and tax laws in jurisdictions where it operates, and that it is “[w]orking with lawmakers across markets, both to ensure our operations remain consistent with evolving state-by-state guidance on the tax code, and to balance the unique nature of on-demand products with the goal of ensuring taxable revenues are always collected by the state.”

Grubhub, meanwhile, maintains that it’s in the right for collecting these sales taxes and denied that the food delivery app business models exempt companies from these collections.

“We have been audited by multiple states, multiple times, and in every case we were required to collect and remit sales tax on delivery fees,” said Grubhub’s CEO Matt Maloney.

The threat of regulation

In recent years, local lawmakers have increasingly scrutinized the tech industry. For example, more states are now charging sales tax on products that are purchased online. That’s because of a June 2018 Supreme Court Ruling, South Dakota v. Wayfair, which gave states the rights to demand more tax revenue from online companies that sell goods in their state, even if those companies don’t have a physical location in the area.

“I’m concerned about what appears to be a pattern of activity of these gig companies to not even find out what they should be doing by law,” said California Assemblywoman Lorena Gonzalez, who authored the landmark labor legislation AB 5 that legally pressures companies like Uber and Lyft to reclassify contractors as employees. “It’s unfair competition. If you have a Dominos, for example, that is abiding by the rules, they’re taking the appropriate sales tax out, they’re not going to be able to compete with an app that’s doing all those things.” Dominos is one of the only major pizza chains that does its own delivery, independent of food delivery apps.

If there’s a lesson to be learned by food delivery startups from tech successes of the past, it’s that creatively interpreting outdated regulations can help them get ahead. Amazon largely skipped out on collecting sales tax for third-party seller products until a few years ago when it was facing state regulations to do so — but by then it was already the top online retailer. Uber ignored licensing rules in many states but became the leading ride-hail company in the meantime. And Airbnb delayed its obligation to collect taxes and enforce zoning rules by suing several cities where it operated.

In all those fights, regulators were slow to keep up with tech companies, which took advantage of that to quickly become market leaders, meaning they could afford costly legal battles. But in an era when tech is facing a reckoning with the public and increased political scrutiny, that might change, and regulators may start applying stricter rules to companies like DoorDash and Postmates.