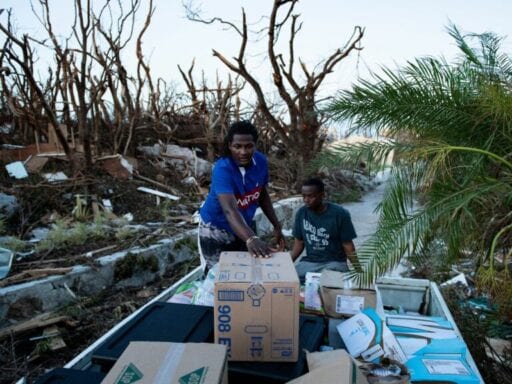 Hurricane Dorian has left at least 44 dead in the Bahamas, at least two people dead in the US, and more than 70,000 people homeless.

Hundreds of thousands of people in Canada lost power as post-tropical storm Dorian — now downgraded from a hurricane but still sustaining hurricane-force winds around 75 mph — toppled trees, fences, power lines, and a construction crane during its sweep along the country’s east coast Sunday. It is expected to enter the North Atlantic Sunday evening, finishing a week of devastation.

The catastrophic storm has left at least 44 people dead in the Bahamas and at least two people dead in the US. As many as 70,000 people have been left homeless due to the storm in the Bahamas, and roughly 800 people were stranded on an island off the coast of North Carolina, cut off by flooding. Thousands more across the US’ eastern seaboard are without power, and at least 350,000 residents of the Canadian Maritimes have lost power as well.

CRASHING DOWN: A large construction crane in Halifax collapsed into a building as powerful winds from Dorian lashed Nova Scotia. No injuries were reported, according to local reports. https://t.co/yIvFVpynz6 pic.twitter.com/P0AszkOguU

The National Hurricane Center has warned of hurricane conditions with high winds extending up to 90 miles from the storm in western Newfoundland. It says the storm will continue to move northeast to eastern Labrador before finally moving over the ocean, away from land.

The storm has weakened significantly since early last week, when it slammed into the Bahamas as a Category 5 hurricane, killing more than 44 people and leaving around 70,000 people homeless in what local officials have called “a historic tragedy.” It was the most powerful hurricane on record to hit the island nation.

The hurricane hit the Bahamas with winds in excess of 200 mph and barely moved, sitting over the island for nearly two days while advancing towards the United States at just one mile per hour. It is now moving at 25 mph.

Government officials in the Bahamas have warned that the death toll is likely to rise as recovery efforts continue due to the thousands of residents who remain missing.

“We acknowledge that there are many missing and that the number of deaths is expected to significantly increase,” Prime Minister Hubert Minnis said in a statement late Friday. “This is one of the stark realities we are facing in this hour of darkness.”

Early rescue efforts were reportedly difficult due to heavy flooding blocking airports and roads. Nearly 1,500 have now been evacuated from the Bahamas via cruise ship and small planes while thousands more remain without homes in the affected areas. The US Coast Guard also rescued 290 people, while other organizations such as the US Agency for International Development, the United Nations, the British Royal Navy have contributed aid through millions in funds, food supplies, and logistical equipment. Aid officials have said relief efforts will likely continue for months.

“We have been through this before, but not at this level of devastation,” Marvin Dames, security minister in the Bahamas, told the Associated Press.

After more than 40 hours over the Bahamas, the hurricane turned north and moved along the Florida, South and North Carolina coasts.

After inundating the coast with heavy rains, the storm hit North Carolina’s Outer Banks on Friday, knocking out power to more than 135,000 people and closing more than 80 roads.

Around 800 people on North Carolina’s Ocracoke Island were stranded by the storm; residents said their streets were filled with four to six feet of water within minutes. State officials worked to return residents to their homes Saturday, though the governor’s office told NBC 200 people were still staying in shelters.

Hurricanes are rare in Canada due to colder waters killing the storm’s main source of energy, the Associated Press reported. The last hurricanes to hit Canada were Hurricane Igor and Hurricane Earl in 2010. Nevertheless, Dorian approached Canada as a Category 2 hurricane Saturday, before weakening to a post-tropical storm.

That dangerous storm has left a long path of devastation. As Dorian begins to move away from land Sunday evening, the communities affected by it will continue to rebuild in a process that could take months, if not years.

Joe Biden’s long record supporting the war on drugs and mass incarceration, explained
Vox Sentences: The far-right White House guest
Genetics has learned a ton — mostly about white people. That’s a problem.
The US needs a 9/11 Commission for the coronavirus
What we learn about the middle class by studying the rich
The real love interest in Netflix’s Operation Christmas Drop is the US military